Musical comedian Jenny Wynter was originally supposed to be hosting a comedy show at The Sit Down Comedy Club to celebrate Mother’s Day on Sunday 10th May.

Unfortunately, the event was cancelled due to the ongoing COVID-19 situation in Australia. Despite this disappointment Jenny has been productive over the social distancing period having recently launched two new podcast series “Let’s Talk” and “Funny Mummies”.

Having already established an online community of “Funny Mummies” on Facebook and run shows which are performed for mums, by mums Jenny’s new podcast is an extension of her online community and motherhood-themed comedy shows. Explaining her inspiration to start the podcast series Jenny says that “I want to have deeper conversations with these women. Some are comedians, some aren’t, they’re all just women I think are hilarious and some of the episodes actually venture to some quite dark places”.

Her other new podcast “Let’s Talk” was born out of coronavirus isolation. “I realised as much as I hate the phone, just being able to connect with people over Zoom wasn’t going to cut it. So, I put the call out for whoever (through my social media channels) to have a chat with me and talk about whatever topic they choose. It’s very much a silly, highly disorganised passion project”.

Onstage, Jenny has been wowing audiences with parodies of popular songs such as “When I Was Your Man” by Bruno Mars and “Piano Man” by Billy Joel. The lyrical themes of the latter speak about Jenny’s experiences as a young mother lining up at Centrelink. Another crowd favourite is a song where she talks about an attractive person who can be best described as a “Hot Bogan”.

Something that sets Jenny apart from the majority of other musical comedians is her special ability to get audience members to give her a list words, names and lived experiences; she then goes onto perform a high-quality improvised song based on the information the audience members have given her.

Jenny’s advice for other musical comedians who are aspiring to incorporate improvisation into their routine is to “learn from those who’ve gone before you. There are some great books and I’m sure a zillion videos online with the basics. Then the main thing once you’re onstage is to just commit! Act as if anything that happens is exactly as you planned it to be. And don’t avoid mistakes; in fact, some of the best moments you’ll have are when you pay attention to a mistake and make a moment out of it and often it’ll lead you to somewhere fantastic that you never would have thought of anyway”.

Jenny burst onto the Brisbane comedy scene when she qualified for the final of RAW Comedy in 2005, in 2006 she was awarded the Brisbane Lord Mayor’s Fellowship for New & Emerging Artists. Jenny says her favourite career highlight to date was performing a one-woman show in New York. “It ended up winning Best Variety Show at the United Solo Festival there which blew my mind. While I was there I jumped onstage with a couple of musical improv shows in New York City and had the time of my life. I think that’s the amazing thing about this industry, for all the struggles and lows there’s so many insane highs, it’s what keeps you addicted”.

Jenny credits living in North America for two years on having a huge impact on shaping her into the fearless and confident performer she is today. She moved to Canada to do a residency on her first show as well as to train and perform with Loose Moose Theatre. A company that’s famous in the improv world founded by Keith Johnstone the creator of Theatresports. “They taught me so much that I bring onstage with me every time; relaxing, being playful, taking risks, finding the joy in it, but mostly importantly being completely at ease with failure. Not just accepting it, but almost daring it to come for you. Being willing to put yourself out there and fail, not just graciously but gloriously, has been a total core of what I do”. 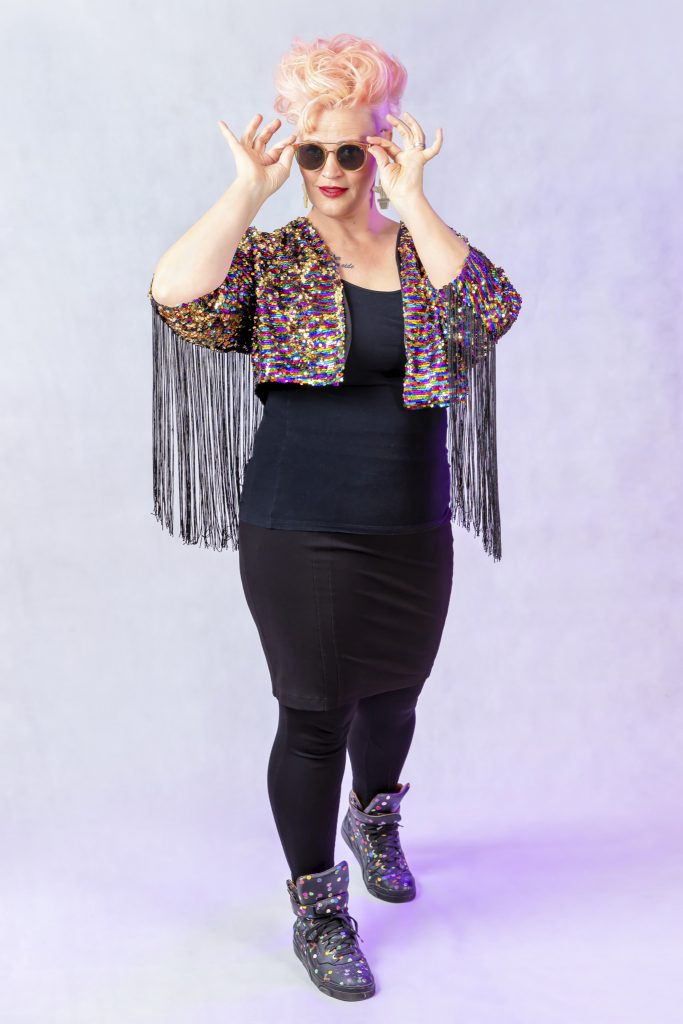 Jenny had months and months of comedy gigs cancelled due to COVID-19. “I spent the first 10 days of isolation barely able to get out of bed and literally broke out in hives for the first time ever. Then my hubby snapped me out of it by putting up a greenscreen in our rumpus room and turning it into a makeshift studio. It hasn’t solved the money issue for us, but it’s certainly been amazing for my headspace to have a creative outlet”.

As Jenny looks forward to the future, when she is finally allowed to perform comedy again she encourages her fellow comedians to “focus on the gratitude of having a stage to perform on! I’m sure we’ll all feel rusty and bruised, but truly, to appreciate that we’re on a stage after all this time and revel in the joy and privilege of that will not only make you feel better as a human, but make you better as a performer”.