Ladies in Black, an Australia movie reliving the days of 1959 Sydney

Ever wondered what it was like back in 1959 Sydney? In the midst of European migration and the rise of women libration? Look no further than the movie adaptation of Madeleine St John’s novel The Women in Black, originally published in 1993.

Watch as director Bruce Beresford (Mao’s Last Dancer) artistically directs the sweet story of four women working at a high-fashion retailer, Goode’s. All wearing black dresses, of course. While the story appears rather simplistic, it soon deepens into a story about acceptance, openness, and learning to understand everyone’s differences.

Lisa (Angourie Rice), a school leaver, begins a summer job at Goode’s. She finds she not only has to learn the job quickly but also learn the people around her. By the end of the year, she will not only receive the grades from her final exams, but she will also learn more about herself.

Fay (Rachael Taylor) is one of the main ladies working at Goode’s. Throughout the beginning, she’s depicted as a rather ‘plain’ and typical Australian woman, using slang words like refos and strueth. However, once introduced to one of the European immigrants, Rudi (Ryan Corr), her worldview becomes more open and understanding. 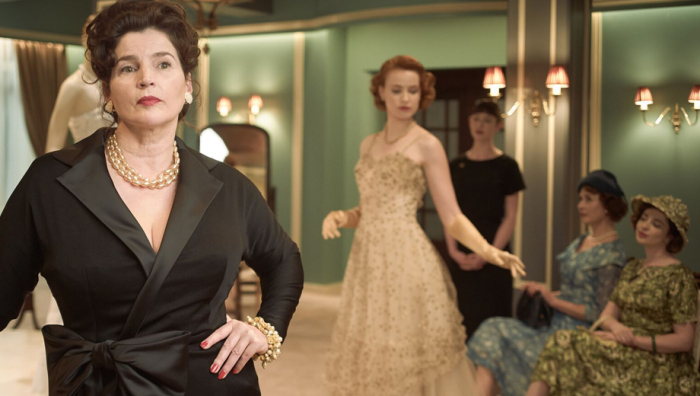 Magda (Julia Ormond) is amazing. She’s the comic relief throughout the movie; first appearing foreboding and intimidating, it’s clear Magda cares for people more than she lets on, or even realises herself. Her comedy comes off more as side remarks and genuine questions about moments, but her different upbringing allows opportunities for her to miss the mark and cause audience laughter.

Lastly, there’s Patty (Alison McGirr), a woman simply lost in her marriage, unsure what’s wrong and therefore unsure how to fix it. Patty’s husband is a bit daft though, showing completely cluelessness to women’s wants and needs. This adds to the hilarity of their relationship when Frank (Luke Pegler) finally gets what’s going on.

Ladies in Black is filled with Australian humour, with its gentle jabs at Melbourne. The movie allows for great conversation of what it was like to be in 1959 Sydney, at the height of European migration and women liberation. It gives people the opportunity to reflect on how Australia has progressed as a society and culture.