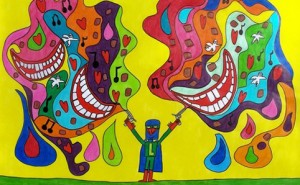 Brisbane, get ready! Your one and only Laser Beak Man is back on the scene and you can find him at the Brisbane Power House from the 25th of June until the 7th of July. Tim Sharp’s new exhibition, “Back at Headquarters” will be on display and is said to be a “bigger and better exhibition than ever before”.

Tim’s colourful expression through his art, depicts the adventures of Laser Beak Man, a hero to all. Wild patterns correlating into a bigger picture add to the quirky humour of the art work hand-drawn by Tim. Laser Beak Man originated from Tim’s mind when he was eleven years old. Since then, Tim’s art work has become internationally renowned. Having been a part of a number of projects where his work was lit up on landmarks in Brisbane, Sydney, Washington and New York, the ABC3TV, Cartoon Network Asia, Australia and New Zealand networks, are now host to an 8 episode mini-series of Laser Beak Man.

Tim’s work is an inspiration for those who have been diagnosed with Autism. At the age of three, Tim received this diagnosis and was even told there would be no use trying to live a normal life. But wow – we are so glad he picked up the pen! When the prognosis of the doctors was rejected, intensive therapy began. Drawing became an important means of communication for Tim. Through his drawings, Tim’s intelligence, humour and thoughts are clearly portrayed.

Now the world is gifted with art of Tim Sharp and the adventures of Laser Beak Man. An inspiration to all, Australian Story covered Tim’s trip to the Very Special Art awards in Washington DC, when at the age of 16 he was the only Australian to be accepted into the festival. Following this a short film was made about Tim when he travelled to Nashville, Tennesse to collaborate with rock band, The Ghost Ballerinas. Inspired by Tim’s work, the band put together a festival called, “I am what I am” and Tim created the art work for one of their album covers. This film was shown at the Metropolitan Museum of Modern Art in New York City. Tim was also a a finalist for Young Australian of the Year.

Get along to the Brisbane Powerhouse sometime within the next month and take a look at some of his hilariously, seriously good art.