The Legend of Ramanujan: The Man Who Knew Infinity Review

A drama about maths could sound pretty monotonous, however The Man Who Knew Infinity is a lot more than calculatingÂ partitions and mock theta functions – it’s about overcoming social obstacles that lie in the path of greatness.Â

The Man Who Knew Infinity is the film adaptionÂ of the biography of the same name based on early 20th Century mathematician Srinivasa Ramanujan; as portrayed byÂ Dev Patel (Slumdog Millionaire 2008).

Ramanujan was born in India but moved to England in his later stages of life to pursue his love of maths and publish his mathematical equations. The problem forÂ Ramanujan is that he has no qualifications or tertiary knowledge, therefore he is not taken seriously by anybody; except for Sir Francis Spring (Stephen Fry,Â V For Vendetta), who gives him the opportunity in working with the great G. H. Hardy (Jeremy Irons) at Cambridge University. 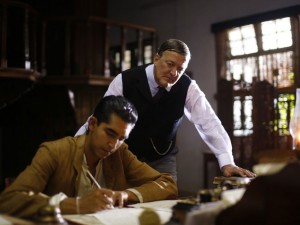 G. H. Hardy takes on mentoring Ramanujan; but the question is: Does Ramanujan want to be taught by the stern and uncompromising Hardy?

Ramanujan and Hardy, create a strong professional bond with each other and together they set out to prove that most of the written mathematical equations are wrong, but also that no matter what education or ethical background a person is from, they can prove that they are worth something in this world.

The acting is fantastic all round, bringing an all-star cast together in this period drama. Another delightful performance is from the underrated Toby Jones. Whether or not Toby Jones’ character gets a spiritual spin-off starring an even more successful actor is beyond current knowledge.

The Man Who Knew Infinity premiers in cinemas the 5th of May. 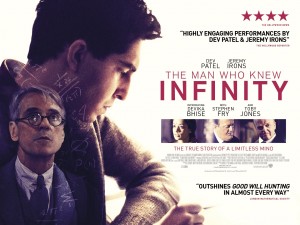