Amy Constable is an old soul with fresh eyes. Having an undeniable artistic talent, a passion for creation, and an understanding of traditional letterpress machinery, Ms. Constable set out to renegotiate the boundaries and expectation of letterpress in the 21st century.

Saint Gertrude, Ms. Constableâ€™s business pseudonym, set up shop 8 years ago and has not looked back since. This inspirational woman is living proof that you can do what you love as your day job. All it takes is an unruly amount of desire, endless hard work, and in her case, a little bit of grease on your face.

The Creative Issue caught up with Amy to find out a little bit more about Saint Gertrude and the impact of letterpress in Australia.

TCI: First things first, why did you name your business Saint Gertrude?

AC: Itâ€™s a funny little code to Gertrude Street, which is a part of Melbourne that is the traditional print makers district. Gertrude Street has the Australian Printmakers Workshop, which used to be the printers pub, when it was a trade rather than an art form.

TCI: How did you discover the art of letterpress?

AC: I was working for an ad agency in print design as a designer, working with really hands-on stuff for specialty print and going out to the print plants to see them operate their off-set presses, so I got an idea of the machinery even before I started doing it myself. I really had a deep respect for print itself. Then I started seeing the work that was done with smaller presses and I just fell in love. I couldnâ€™t take my eyes off it, I couldnâ€™t stop thinking about it. I came across the work of a printmaker named Carolyn Fraser who is a traditional printmaker, who works with metal types and wood types, and her work hit me like a freight train. I havenâ€™t done anything else since. 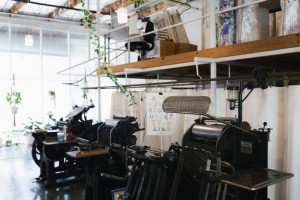 TCI: It is definitely an old craft; do you think people know exactly what you do when you tell them?

AC: 5 years ago no one knew what I did when I told them. And now, about 80% of people know what Iâ€™m talking about when I tell them Iâ€™m a letterpress printer. I think itâ€™s had a burst in popularity to the point where itâ€™s a lot more mainstream, or people in the mainstream are more aware of it.

TCI: Was there a moment where you realised this would be a viable career for you?

AC: No, oh, well kind of! It was a bit of test of character in a lot of ways, but when other letterpress businesses began opening up and I was considered alongside the competition thatâ€™s when I realized this was a thing I could actually do something with.

TCI: What was the reaction of your friends and family when you started dedicating yourself fully to your craft?

AC: Iâ€™m pretty lucky that both my parents are artists. My dads an actor, and singer, and my mum was a jeweler. It was normal from their points of view, they always thought that the job I was doing was too straight for me anyway. My doing a 9 till 5 job was out of character in a lot of ways. They were really just encouraging me to work hard and not get too caught up in the emotion of it and just keep going forward.

TCI: Do you think letterpress has faced a lot of issues in comparison to what is available now in the digital age?

AC: I actually donâ€™t. I feel like letterpress is the antidote to the digital age in a lot of ways. Itâ€™s a bit impervious that notion of â€˜print is deadâ€™, because print in the pragmatic sense is dead. We donâ€™t need to communicate with each other using the printed page anymore. We communicate with each other via text and email and social media, but if you want to make an impression on someone or you want to really put a bit of humanity into it, people still want something physical in the respect â€“ and something that has been made. And you canâ€™t get more made then letterpress printing, you can tell that somebody made this â€“ a computer didnâ€™t make this, a person made this. In that sense, itâ€™s better than digital printing for that purpose. 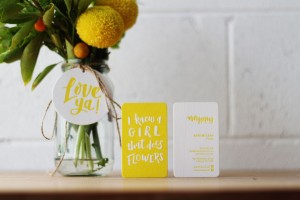 TCI: Do you think thatâ€™s why people should choose letterpress over the digital stuff?

AC: Yeah! I think digitalâ€™s place is in fast and cheap. Email is faster and cheaper. Whereas if youâ€™re actually trying to make an impression on someone then you might as well pull out the big guns! When someone is doing a business card and they compare the price of a digital printed business card verses a letterpress business card, I tend to say to them it depends whether you want your card going in their recycling bin or their wallet. Because one of them theyâ€™re going to keep and one of them theyâ€™re not. The letterpress is what theyâ€™re going to keep.

TCI: What advice would you give to someone wanting to get involved in such an artistic niche?

AC: Thereâ€™s an artist called Jessica Hughs who says, â€œwhen the things youâ€™re doing on the side take over, then you know youâ€™re doing something you really love.â€ Itâ€™s okay to do something on the side, itâ€™s okay to still work a day job and test the waters with a hobby until that hobby takes over and you canâ€™t do your day job anymore. I think thatâ€™s the smartest way of doing anything creative. Sometimes throwing yourself headfirst is harder and more nerve-racking â€“ and that anxiety can hold you back.

TCI: I hear you do private lessons and are about to launch workshops, what should people expect when coming along to your classes?

AC: I do an intro class every month. Some of the people that come along are designers and illustrators who know a lot about letterpress, and some of them are complete newbies; nurses, lawyers, and accountants. Itâ€™s just a day out doing something creative with their hands. Itâ€™s a really interesting mix of people, and we go through the process of printing. Some people come back and use those new skills to print their own projects.

TCI: So you donâ€™t need any artist ability to come along? 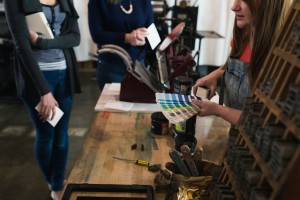 TCI: And finally, where do you see the future of the letterpress in Australia, in particular?

AC: I think weâ€™re actually coming out of the niche stage, and weâ€™re in a bit more of a mainstream environment. Weâ€™re going to see a lot more things in letterpress in the next few years. Particularly in direct marketing campaigns, and corporate communications will be a lot more focused on that high-end print. Itâ€™s something thatâ€™s only just hitting the big time now.

Amy is available to create your artisanal business cards, postcards, invitations, greeting cards â€“ any projects from small to large are welcome!

To keep up-to-date with Amyâ€™s movements, or to find out more information, click here.