There would be few in Australia’s musical scene that haven’t yet been acquainted with the annual BIGSOUND Conference and Live Event, the streams of people shouting for tech gear, entry lanyards and most importantly coffee outside Brisbane’s Judith Wright Centre an unmissable precursor to what is a huge event on the city’s calendar.

The younger sibling of the event – Little BIGSOUND, is also not one to miss as far as the music business is concerned, pandering to the masses of potential artists, writers, tech-heads and music affiliates to be found in Brisbane’s younger audiences.
Like perhaps Solange and Liam Hemsworth, it seems that throughout the years the younger sibling of the BIGSOUND event is also perfectly capable of drawing it’s own attention.

It was in the Judith Wright Centre where I caught up with some of the organisational team behind this year’s event – Hamish, Eve and Jimmy greeting me as the last press meeting of the day, not at all flustered after back to back interviews with local media.
Hamish – Marketing and Media Liason, seemed especially relaxed about the days attention.
“It’s all been pretty casual.”

The three were all students of QUT, graduated or otherwise, and had picked up the job of organising what could be considered a state-wide event through word of mouth, and of course a hefty interview process- Jimmy the appointed Marketing and Advertising Manager grateful for the chance to work at something tangible.
“This is all pretty new to me. It’s given me many opportunities…working with a dynamic of how events like these are put on- working with a graphic designer, working with the marketing team, with an event manager…”

Hamish was also quick on discussing how their roles came about.

“We were all meant to be marketing, that was our original title. The good thing about this is that we’ve all slotted ourselves, and figured out our strengths…We’ve learnt a lot, and everyone’s dipped into other areas that maybe they haven’t been used to before.”

With each organiser having some degree of on-hand experience outside of their coursework, it wasn’t difficult to put their hands up for jobs that arose as organisation progressed, this originally having helped seal their spots on the Little BIGSOUND team.

“Plus we’re awesome, so that helped.”

It hasn’t been entirely sunshine and daisies, Creative Director Eve and Jimmy both remarking on the timeliness that any interactions via social media had to be for their audience of tech-savvy wunderkind.
“It’s 24/7, keeping wraps on everything. Communication is key. If you’re posting stuff on Facebook, you’ve got to take into consideration when to post it, how often to post it, who to post it to.
And communication which is behind the scenes to other people working. You work when you need to work.”

The team has honed their target demographic to a razor’s edge, jumping on one of the most accessible phenomena in recent years, Hamish explaining how Little BIGSOUND’s theme for this year – Becoming Viral – plays out through marketing. 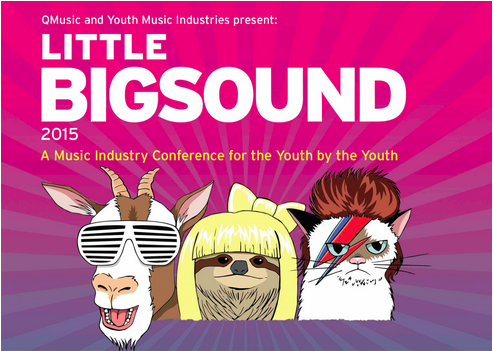 “We made a meme, when we announced that artists could apply for the event. It’s all been a group thing.”

Love them or hate them, the frequent placards and movie-stills assaulting your Facebook newsfeed from day to day have a certain punctuality that hits home amongst a young online audience, the most recent tile design courtesy of Eve, herself a Graphic Design graduate.

“We all came up with the idea from the ground-up, set the foundations.”

Industry development association QMusic have, as usual, had a fair part to play in the marketing effort for Little BIGSOUND, the help of a state-wide networking association packing some punch when it comes to resourcefulness.
This hasn’t however had any part to play when it came to the execution of marketing strategy, the team proud to say that every painstaking piece of groundwork had come to fruition through their efforts alone, sponsorship proposals, design and marketing methods among some of the considerations.

When it came to artist showcase applications, the group was delighted to discover the enthusiasm of Brisbane’s bands, with almost fifty applications having to be narrowed down to two.
Alex Crook and The Con and the Liar will this year feature their music throughout the duration of the event.
Hamish, apparently no optimist regarding the showcase, was at least pleased that the efforts on one of the more tentative sides to the event had paid off.
“I didn’t think we’d get that many. It shows we’d done our research, to create a level of communication with our target demographic.”

Other efforts by the group to draw the online crowds include a competition via Instagram- the details to which remain under wraps- and a continued effort to draw professional press.
Compared to efforts from last year, the group agreed that there was definitely space to breathe; a hardened marketing strategy and a little imagination lending itself to the cause.
Hamish- Marketing Director, Media Liason and it seemed unofficial spokesperson, summed it up nicely.

“I think the beaty of it is that they haven’t done massively ‘out there’ stuff for Little BIGSOUND previously. We wanted this to be different to last year- better…actually being the little sister to Bigsound rather than being an offshoot that isn’t wholly related.”

Little BIGSOUND kicks off on the 27th July, be there or be square.