Looking around at the (early morning) faces gathering at The Edge, it was immediately clear that Little BIGSOUND was going to prove a valuable tool for the young music enthusiasts in attendance. Musicians were mingling with industry lawyers and booking agents with photographers- a true menagerie of industry insiders. The first panel, mediated by APRAâ€™s Chris Oâ€™Neill and titled â€œThe Next Stepâ€, mainly covered why and how panellists broke into the elusive â€œmusic industryâ€. Featuring Maggie Collins (of Triple J), Fiona Campbell, musician and manager Paul Watson, and Jesse Barbera, the panel discussed topics such as the need for tenacity and willingness to volunteer- as well as acknowledging when there should be a wage attached to your work. 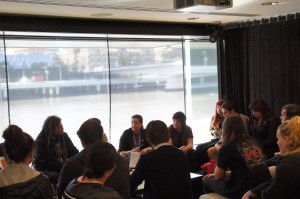 Jesse Barbera, owner of multiple Brisbane venues and managing director of local legends The Fans Group, made some particularly interesting points regarding progress and the path towards success; as a proud self-described entrepreneur, he laid down the hard facts in terms of near-bankruptcy, near-poverty and breakdown of friendships as possible outcomes when working towards a career in a creative industry. The panel agreed that sincerity and generosity were key to gaining success in a highly competitive field- Maggie Collins made it particularly clear that simply being a good person increases chance of employment tenfold. Following an informative and entertaining panel that left audience members in a prime state of mind to continue learning, the crowd split into breakout sessions covering niched interest groups such as Pro Tools, Management, and Performance Technique. Local legend Graham â€˜Ashoâ€™ Ashton (of bookings and development company Footstomp) delivered a top-notch session on marketing. In the allotted one hour session he, along with Holly Gazal from The Arcade Creative and Rodney Holder from Alchemist, worked through marketing and promoting a bandâ€™s first EP on a budget of $1000. The â€˜bogan rockâ€™ band named â€œThe Screaming Raccoons only ended up spending $450 on things such as promoted Facebook posts and ticket deals with related stores- an achievable and practical goal, and extremely informative sessions for local bands looking to engage in more serious promotion. After regrouping on the rooftop terrace for lunch, attendees were lucky enough to catch sun-soaked performances from The Worriers, Youth Allowance and Sahara Beck. 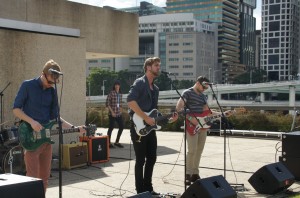 The Worriers were energetic and on-point as usual, their vibes perfectly suited to the youth oriented attendees of Little BIGSOUND. Youth Allowance were equally as entertaining, and continue to show promise as a developing young band, and were followed by Sahara Beckâ€™s unique and captivating vocals and sweet guitar work. After having the opportunity to further engage and mingle with speakers from prior breakout sessions, the second round of sessions came around. A particularly popular option was Gig Logistics, held by producer Lachlan â€˜Magooâ€™ Goold, and covered the loading in and set up process involved with performing live. A more serious but nonetheless necessary session was titled â€œKnow Your Rightsâ€ and dealt with the legality of recording and production and moral rights over music production from both an artist and legal standpoint. After second sessions concluded, attendees regrouped for the dayâ€™s second panel session- â€œThe Big Pictureâ€. Panellists included Sam Cromack of Ball Park Music, Jeremy Neale, and The Voice Australia runner up Darren Percival. Hosted by local music writer and current music editor at Double J, Dan Condon, the second panel dealt a lot more heavily with personal stories and reflection than the first. Â Darren, Sam and Jeremy all strongly agreed that passion and love for music needs to be the primary driving force behind a desire to be in the music industry. Sam described the feeling as being â€œpossessedâ€ by a love and need for music, before Darren went on to define â€˜successâ€™ simply as being happy. Little BIGSOUND for 2014 was undeniably an educational and informative occasion, and provided a necessary opportunity for young people to engage with employees of the music industry in a semi-professional environment.

Highlights from the Night Noodle Markets