Louisa May Scott’s novel Little Women tells a story relevant in any year since the date it was published, including today, as was evident in the recent Broadway-style production of the novel at The Brisbane Powerhouse.

Scott’s tale of the endearing March family, in particular, the unwavering persistence of eldest daughter Jo, Rebecca Rolle, in search of her independence and dreams, is relevant to any person today marching down the path toward their own goals. Queensland Conservatorium’s production of Little Women: the Broadway musical conveys Scott’s novel through a platform that reaches out of the paper and bindings, bringing the March family and their history to the Visy Theatre at The Brisbane Powerhouse. 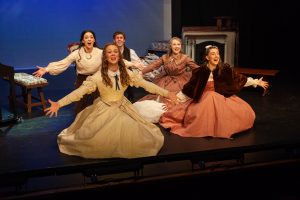 A cast of Queensland Conservatorium’s third-year musical theatre students performed Little Women, and their talent and training were evident on the stage. The cast balanced the vocal requirements of the Broadway-style production with the emotional demands of the scenes. The connection between the cast members on stage was captivating, and I can’t help but think of how the cast’s history of studying and training with one another for the past few years made possible this obvious connection that surpassed character requirements.

I was uncertain going into a two-and-a-half-hour production of a literary classic, and during the first act, at times, I felt my uncertainty was warranted. While the music was captivating and contemporary, featuring a particularly touching scene between the sweet Beth, Bronte Mitchell, and hardened Mr Laurence, John Davidson, the act felt a number or two too long to capture the audience’s attention the entire way through. However, the second act balanced plot progression, music, and time in a way that kept me enthralled from the moment the act commenced until the moment the house lights brightened again. 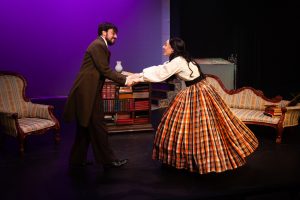 Queensland Conservatorium’s Little Women portrayed an array of emotion and experiences relatable to any audience member, from loss to hope, desperation to acceptance, and, of course, love, both mutual and unrequited. One particular scene featuring Professor Bhaer, Daniel Hamilton, had me at the edge of my seat, cringing, wanting to comfort the man on stage as he realised the pain of having the woman he loves so distant from him. And the final scene featuring Jo and Professor Bhaer had me beaming long after I’d left my seat, walked to my car, and driven home.

Congratulations cohorts on a wonderful performance.

What: Little Women: the Broadway musical