You’ve got to hand it to the girl, she can command an audience.

Lorde thrilled audiences at The Zoo last Wednesday with a stunning beginning to her sold out Australian Tour.

The 16 year old performer won over the hearts of the Brisbane crowd with favourites including â€˜Tennis Courtâ€™, â€˜Swinginâ€™ Partyâ€™ and â€˜Royalsâ€™ before abruptly leaving the stage and a sea of people with ‘Pure Heroine’ withdrawals.

With the lure of an hour long concert, fans stayed around long after the singer had fled her stage, chanting for an encore.

As tech guys began to pack up and lights slowly faded back on, murmurs from the confused and disappointed went up.

Condolences for those fan-girling that hard, I only hope they have Twitter because Lorde was quick to explain her actions an hour later in a tweet: 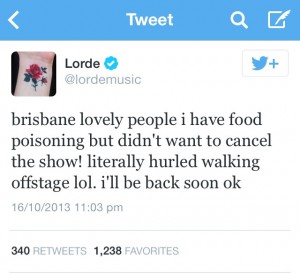 Posted an hour later, Lorde explained her abrupt ending to the show

Dramatic ending aside, Lorde captivated the crowd with her very stage presence.

An adult woman in every sense of the word but one, Lorde showed Brisbane a side of her no one was expecting.

A wild mane of hair, a deep velvety voice and a gait that screamed sexy, it was practically impossible to believe the woman performing wasn’t of drinking age.

Accomplishing so much with such an incredible tour ahead of her, it makes you realise how damn lame you really were at 16.

Paula Hall: Jewellery for every woman!

Look out: Brisbane’s Artist Hive is in Sydney