Love, Lust and Learning in ImproMafia's No Holds Bard

Shakespeareâ€™s works are definitely some of â€“ if not the most â€“ performed theatrical productions in the world.

The Bard’s words speak to us on so many levels and have inspired countless other works in theatre, film and music. Therefore, itâ€™s little wonder that ImproMafia, our local impro troupe, donned their Shakespearean garb, mannerisms and hats and performed for Brisbane a Shakespeare-inspired production â€“ No Holds Bard â€“ last night. Helmed by seasoned director Amy Currie this show was a short and sweet bit of improvised theatre that really got the audience roaring with laughter at times.

No Holds Bard was a guaranteed fun night out. Whatâ€™s not to like about going to see a show where everything is left to chance and scripts are nowhere to be found?Â  It featured romance, tragedy, the odd sex joke here and there, and of course, lots of laughs at the antics of the performers as they came up with line after line of witty dialogue that flowed and brought the story together seamlessly. The show began without much hesitation, as the actors were in character as the audience filed into the intimate space that is the Paddington Substation. The actors drew inspiration from members of the audience to create their story, and then they were off. 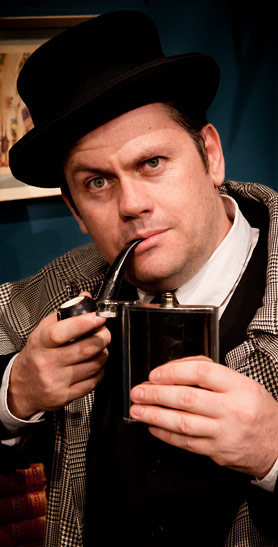 The story followed a man named Malcolm who yearns for knowledge – only to find that in the town of Dymocks, all the books have been burned, leaving no room for learning. After being told of a small bookshop far yonder, Malcolm begins his quest to bring knowledge back to Dymocks, where he meets a young woman named Helen who has a secret; selling books by day, she is in fact a lady of the court. In a plot to bring back books she meets Malcolm, and the two devise a plan to overthrow the current regent, with the help of a Muse from Olympus. This whole production was hilarious from start to finish with all the actors performing admirably in their roles. Whilst this was not Shakespeare, it had the heart and the spirit that Iâ€™m sure thespians and playwrights would have had back in Elizabethan times, and their work was certainly rewarded with many a chuckle or guffaw from the audience. ImproMafia have once again shown that they know their stuff and can strut it with ease on stage.

Milli and Fink: A place for creating

Behind The Scenes of Boy&Girl with Director Jack Kelly