The Motion of Light in Water is currently dazzling Brisbane audiences with its stunning mix of bold history and fantastical sci-fi. We spoke to one of its stars, Ray Chong Nee, about putting the production together and the importance of independent theatre.

The Motion of Light in Water is a big-hearted play with an even biggest setting. The action bounces madly through the centuries, fictionalising the lives of sci-fi author Samuel R Delany and poet Marilyn Hacker, while simultaneously telling the story of spaceship captain Rydra Wong, in a narrative synthesised from Delanyâ€™s works. In the middle of all this action, and holding all these threads together as both actor and co-creator, is Ray Chong Nee.

The Creative Issue: Your main character, Samuel R Delany, was a bit of a visionary. Was he a hard role to take on, or did you find you shared common ground?

Ray Chong Nee: To start finding the character of Chip, based on Samuel R Delany, you always have to find the common threads that run parallel in both your lives, whether that character is fictional or not. How then an individual actor moves into inhabiting that character differs. For me, itâ€™s then finding the differences, which there are always many. He is a genius and visionary, I am not so much. He was born in the U.S.A during a time of international and civil war, I was born on a tropical island that was considered an undeveloped nationâ€¦The list goes on. So was he hard, you bet he was. But constantly asking questions, coupled with trial and error will bring the truth further and further to the surface. Itâ€™s like baking a cheesecake, you never think you could make such an amazing dessert till you put your mind to it, you decide to create one, and voila, you have made a cheesecake. And then you share all the love you have put into the cheesecake with others.

TCI: During the show, you play not only Delany, but starship pilot Brass and also (briefly) yourself. Was it difficult to keep so many different voices in line?

Ray Chong Nee: All the actors play various roles, ranging from intergalactic space traveller to citizen of New York, and we have all had to find those voices inside ourselves. Three of us have been fortunate enough to have been with the project since its inception, and the other half of the cast have been a part of the project for just this last month. For those of us involved from the beginning, we spent months trying to find these voices, so they already exist within us, and if anything, they have had time to grow stronger and become more complex/multiplex. For the newest members, they have done an extraordinary job in becoming a part of the fabric of this theatrical piece in the time they have, they deserve recognition.

The specific direction and writing of Marcel [Dorney] has helped us immensely demarcate our characters and voices, so keeping them in line has been his job. There were often many times in the rehearsal room where they would take over, tangents would go on for a few minutes, until we were reigned in and we would have to refocus on the task at hand. 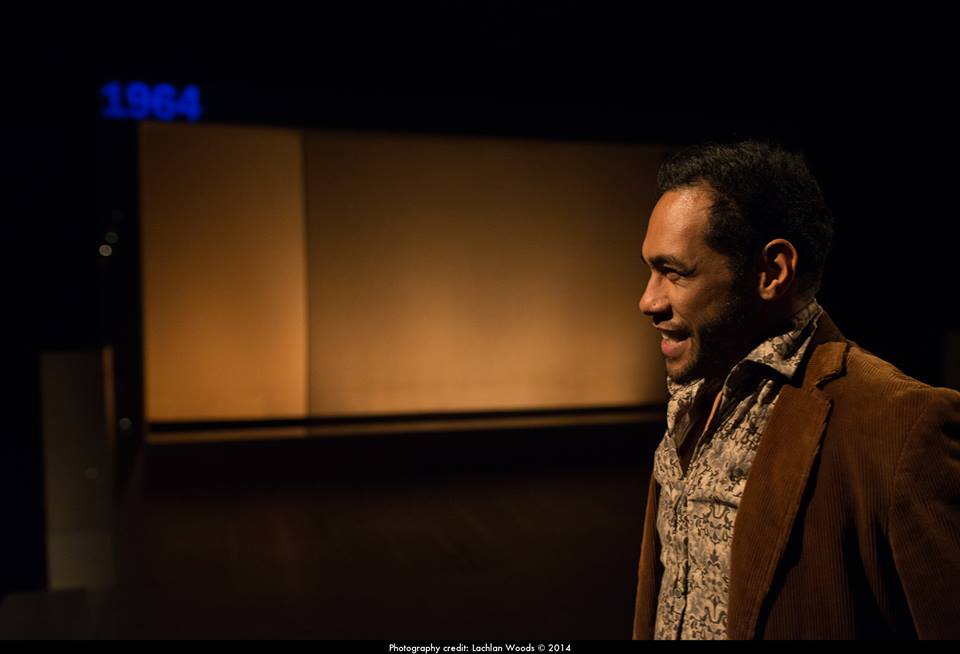 TCI: The Babel-17 plot was tremendous fun from an audience perspective. Was the retro aesthetic and light-up set also fun from an acting standpoint, or was it more a case of fighting with uncomfortable lycra?

Ray Chong Nee: The lycra by ZoÃ« Rouse is actually quite comfortable to wear, itâ€™s the spandex under the lycra that feels awkwardâ€¦suppressing if you will, from my male perspective.

The lycra fits in very well with the aesthetic/design of the show in my opinion and it was a great set design by Mat Adey from the House of Vnholy to work in. Rounding it out, the lighting states by Kris Chainey, music by The Sweats, and AV by Andre Vandewert all support the audience in which ever millennia they were meant to be experiencing. All these great minds together, along with Marcel and Emily [Tomlins] from Elbow Room, create a great space to â€œplayâ€, so it has been an absolute joy.

TCI: Marcel Dorney has said that when the show was first being discussed, no one had a clear idea of what science fiction meant to them. After over a year with the production, have you formed a firm opinion on the genre?

Ray Chong Nee: The genre is ever evolving just as we as a society and our technology are ever progressing, and as such, I donâ€™t portend to have formed an opinion yet on the genre. What I do know is, I was always interested in science fiction, but purely from an imaginary and visual perspective. I never understood the science behind it, nor read the literature. Now, with this show and minds like Delaney and Marcel Dorney, in conjunction with reading Babel-17 and Empire Star by the former, my literary world has opened up exponentially. I guess I find catharsis with the genre, because we as actors have to use the power of imagination in our careers, to transport us to distant worlds and people.

TCI: Youâ€™re also one of the showâ€™s co-creators. How did you bring together so many different sources and stories to forge the cohesive whole of The Motion of Light in Water?

Ray Chong Nee: I was initially asked by Marcel and Emily (and Dean [Cartmel], their Producer) to be a part of the show as we had wanted to work together again, so initially I was a co-creator for all intents and purposes. However, during the development period at Hothouse Theatre in Albury Wodonga (commissioned by the former AD and Associate of Q.T.C John Halpin), once the whole team was brought together, it was realised that each individual was a co-creator.

With your previous question in mind, we were asked by Marcel to read the two works mentioned, as well as the autobiography of the same title as the play. We then spent two intensive weeks in the country developing ideas, sharing personal stories, agreeing with anecdotes or not, exploring the possible physical language, and waking up to cows chewing outside our windows.

This gestation period was followed by a few months of script writing for Marcel. Once completed, it was brought to the first day of rehearsals, where revisions were made if we felt strongly that an event or idea was missing from our initial development.

We rehearsed the new structure before taking it to Hothouse for its first season, which was a success, and then moved it to Theatreworks for its second season which was also a success, as here we are now in Brisbane, a year later presenting the work to a new audience.

The vision of Elbow Room has forged the cohesive nature you talk of, but each contributor from its inception to this point is a co-creator, itâ€™s a great ensemble piece with great casting. 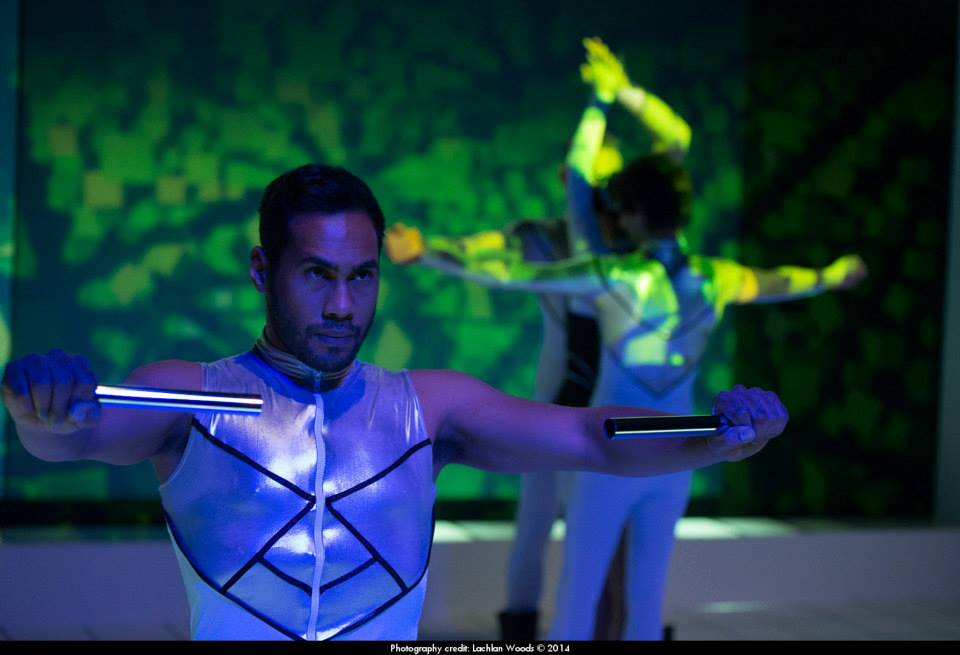 TCI: The play is very, very meta â€“ particularly in its final scenes. Can you tell me a bit about the decision to break down the barriers between the separate stories, and between the stage and the audience?

Ray Chong Nee: The real life and imagination run parallel for most of the play, but the science fiction is, as stated above, part of an imaginative construct realised from the real world lives of Delaney and Hacker. So when Bob no longer is the centre of their world, the theatrical story also has to change, but the audience also needs to remember that what they are watching is a stage adaptation of real life events, we do not purport to encapsulate the life of such extraordinary humans in 110 mins. Rather, the questions you ask me now, is what we aspire to achieve, dialogue about the precise communication of our experiences.

TCI: This production is doubtless one of the most diverse Brisbane has seen all year. What needs to happen within the theatre scene to ensure more shows like MoLiW reach the stage?

Ray Chong Nee: This Elbow Room (Melbourne based) production is proudly supported by La Boite, because the leaders in this institution understand the role that the independent sector plays to the theatrical milieu in this country. This sector is able to ask questions otherwise seen as maybe a risk to the more generously supported mainstream, something that Melbourne does very well and Brisbane is moving towards, and with those questions, diversity in all its forms comes to the forefront.

Funding therefore is integral to the survival of such â€œdiversityâ€ and such companies, but also nurturing and support for these makers also needs to be assessed further. The tenacity, intelligence and temerity of artists and institutions such as Elbow Room mean their stories will reach the stages they have, but they surround themselves also with people who are on the same trajectory.

Funding is not the only answer, there are various other factors like education, disparity of importance on culture compared to sports, and stereotyping to name a few, but securing the financial viability of the independent/small to medium sector is a good start. 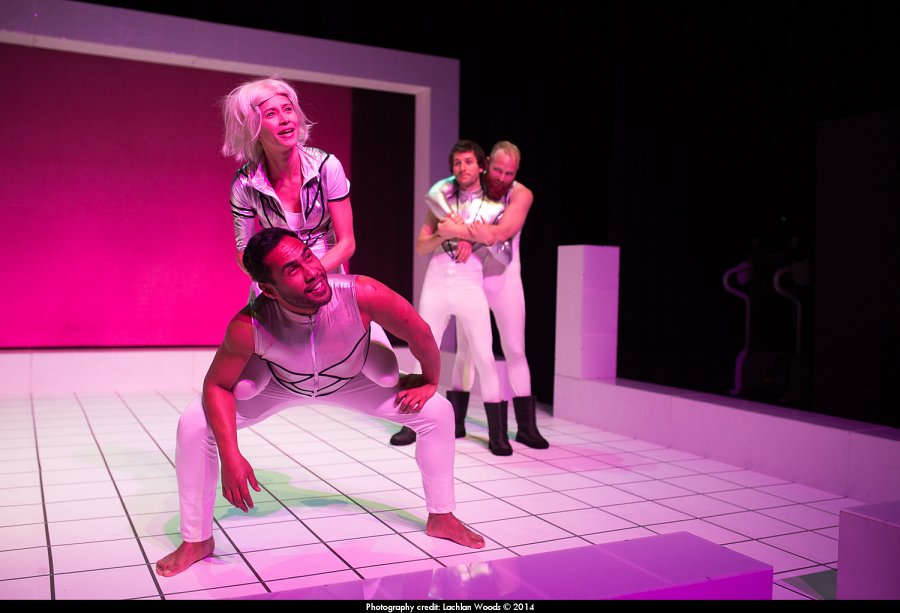 TCI: Next year youâ€™re going on to play Othello with Bell Shakespeare â€“ what are you most looking forwards to about playing the title role, and what are some of its challenges?

Ray Chong Nee: In conversation with Peter Evans, Artistic Director and Director of the show, an idea came out to use part of my cultural heritage (Samoan/Chinese/English/Swiss German) to inform how the world might be formed for this version of Othello. The classic text The Tragedy of Othello, The Moor of Venice has specific ties to the African and European continent, but also to a more western sensibility, so to bring the story more in line with an artistic goal of Bell Shakespeare, which is to contemporise Shakespeare for an Australian audience, by highlighting the title character from a Pacific background, is very exciting.

Bringing this cultural influence into the text has its own challenges, but I think my biggest challenge will be with myself. To inhabit myself into the world of a military man, along with the possible physique that comes with it, and to embody the true tragedy of the story, which is to be so affected by one manâ€™s insecurity that it forces you to kill the person you love most in the world.

You can catch Ray in The Motion of Light in Water for a limited time at the Roundhouse Theatre, and of course, in Othello next year.

WhatÂ The Motion of Light in Water

For tickets or more information, head over to La Boiteâ€™s websiteÂ here.