Lysa and the Freeborn Dames: making a stand for women

In the wake of worldwide Women’s Marches, Lysa, Tania Vukicevic, returns home to the small, backward town she grew up in, ready to make a stand of her own.

Lysa and the Freeborn Dames is a polished production exploring female and male power, politics, and the potential for change. Performed in La Boite’s Roundhouse Theatre, Lysa and the Freeborn Dames is set on a sunken stage depicting the inside of a musky, masculine bar where tradition places women as objects to be won. After studying in the city for a year, Lysa feels it’s time, her time, to instigate a change with the help of her friends, Myra and Esme, Samantha Lush and Tatum Mottin, and former lover, Peta, Clementine Anderson.

But a lot has changed in a year, and her friends and former lover who would once have followed Lysa have thoughts of their own. Lysa struggles against the ingrained division of feminine and masculine roles set in the minds of her friends, lover, and Ken, Morgan Francis, a police officer drawn to the disturbance in the bar. Ken isn’t blind to what Lysa is saying; he sees where the town suffers and isn’t quick to shut Lysa’s protest down. But there’s only so much one girl, with the partial support of a Copper, can do when her friends refuse to stand with her and the town rallies outside. 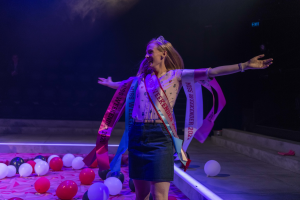 Lysa and the Freeborn Dames is a highly political work that challenges the viewer with their acceptable limits: what do women do because they want to do it, and what do they do because they feel they have to? The cast and director Sanja Simic have clearly worked to take full advantage of the space the sunken stage provides. No part of the stage was left unaccounted for, while no action or direction seemed unwarranted. The Greek chorus of the freeborn dames, three elder and wiser women, Barbara Lowing, Roxanne McDonald, and Hsiao-Ling Tang, circled the sunken set and echoed Lysa’s struggle by telling the similar experiences of women past. By calling to attention the past and continued political and societal struggles of women, playwright Claire Christian highlights the need for change and the unacceptable, lengthy time it took to effect change in the past.

Lysa and the Freeborn Dames is political, passionate, and poignant. Information meets anger and refusal to conform any longer to a position that displaces equality among the sexes, and the work asks that critical, painful question: why are we still fighting for this?

What: Lysa and the Freeborn Dames