The Making of a Music Festival - Part One

Seretones Music Festival, coming up at the start of June, is a little different from other music festivals in the Valley.

The festival is being entirely planned and executed by third-year entertainment students at QUT. These students have worked from the bottom and have been responsible for making all decisions from the name, to the lineup, to how many social media posts should be made every day.

Seretones is an indie-pop festival which will be held at the Brightside in the Valley. The lineup includes the likes of Port Royal, The Seefelds, Pink Matter and GNIGHTZ. 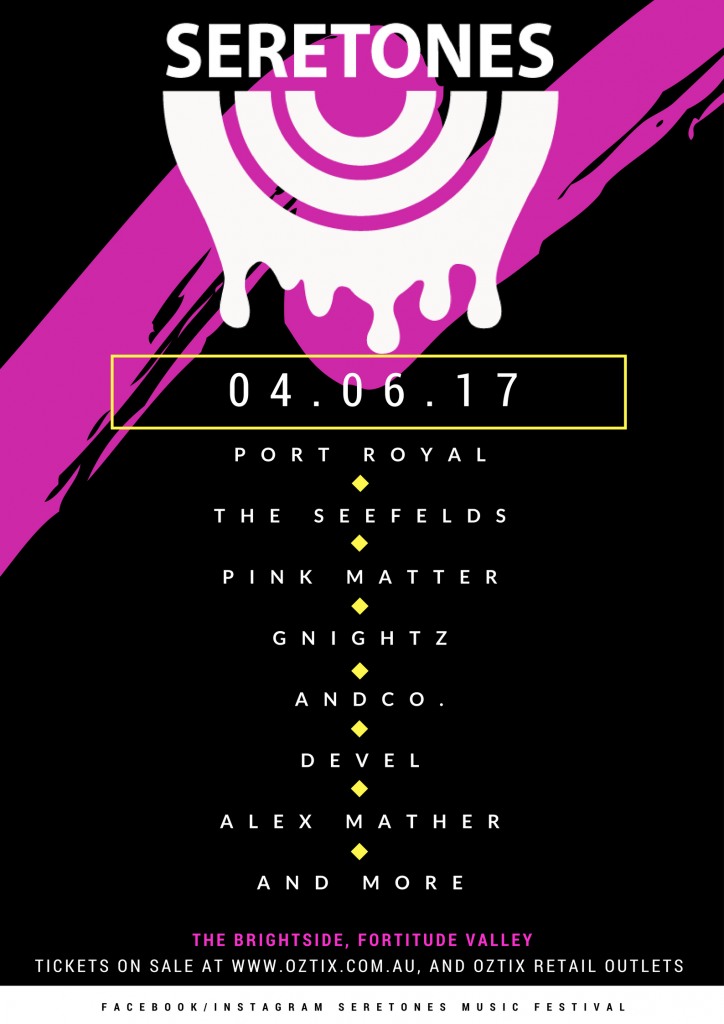 The Creative Issue sat down with a few of the students from different teams to discuss the highlights and struggles of executing a music festival.

The Creative Issue: What excited you most about the idea of being able to plan and execute a music festival?

Courtney, Project Operations: It’s the first event we’ve had complete creative control over. It’s been awesome to see everyone’s idea and build the festival from the ground up.

Siona, Publicity: There’s lots of room for learning through the process and getting to experience what it’s like to do this. We’re getting practical experience that we can put on our resumes.

Joanna, Venue Liaison: The fact that up until now everything has been theoretical. It was scary being thrown into an event where we weren’t sure what we were doing. But it’s nice to work it out and exciting working on something that will actually come to light rather than an essay.

TCI: How did you make the decision of how big you wanted the festival to be considering it’s in its first year?

Courtney: We made the decision based on the fact that we’d have to raise the money and we only had eight weeks to do it. The bigger venues in the Valley were either booked out or had thousands of dollars in booking fees so we decided that we would rather say we sold out a smaller event in its first year than not break even.

TCI: What was the main goal with social media? Any struggles?

Emily, Social Media: The goal was to reach as many people as possible and getting engagement with the social media sites. But the hardest part with social media marketing was starting from the ground up. We had to make a page which had zero likes and somehow needed to sell 300 tickets.

TCI: What was the most important thing you considered with the lineup?

Georgia: Energy. We wanted to make sure there was a good vibe with each of the bands rather than focusing on a specific genre or niche.

TCI: What about with the venue?

Joanna: We focused on finding a venue that was already established and had a name for itself in terms of marketing rather than a newer venue. This was an advantage from a marketing point of view, if people know the venue, they’ll be more keen on the event. We also had to consider the capacity as well as vibes.

TCI: What was the hardest part of finding reputable bands for the festival?

Courtney: Definitely selling out pre-sale in less than a week.

Courtney: Communication. We underestimated how hard it would be to get the right people to talk to each other. We’re lucky enough to have awesome HR and internal communications teams that are on top of it.

These students are now in the final weeks of preparation before the festival but spirits are high and they’re excited to see the end product.

More Info: This is an 18+ event. Tickets at Oztix.