Medea at the Judith Wright Centre

The Judith Wright Centre in partnership with the Aboriginal Centre for Performing Arts (ACPA) presents the colossal Medea.

They pride themselves on maintaining a strong understanding of Aboriginal and Torres Strait Islander cultures.

The ACPA bring this understanding to light through supporting and building the knowledge of story telling through words, music and dance.

After a sell out season of the past production, Blaque Bordello, the partnership has continued by bringing audiences another fantastic show.

The actors take the audience on a journey exploring the ancient Greek tragedy of Jason and Medea. 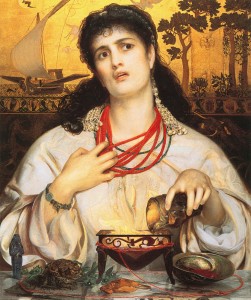 Painting of the traditional Greek goddess Medea. Image from http://en.wikipedia.org/wiki/Medea

Medea was the granddaughter of the sun god Helios.

She later married the Greek mythological hero, Jason, with whom she had two children.

The play explores Medeaâ€™s betrayal when Jason leaves her for another woman.

Medea is driven by revenge and seeks justice for the wrong doings imposed on her.

The play is broken up with scenes of music where the male actors reinterpret the changing relationship between Medea and Jason.

Despite the fact the actors are all quite young they do a great job at trying to portray such hard themes.

I would highly recommend supporting young Brisbane talent by getting yourself along to the ACPAâ€™s Medea.