Waiting for Harry Wall outside the café in West End it is his own ‘Lavender’ merch he is sporting that gives him away. Over coffee we discuss the inspirations that drove Harry from his hometown of Airlie Beach to Brisbane, how he connects to his music and the continuing evolution of his work.

The COVID-19 restrictions meant Harry lost his opportunity to play a set within the highly anticipated Spacey Jane tour. However, despite the disruption of this year he sees it positively, an opportunity to get back to song writing and as he simply puts it ‘living’.

His new single, ‘Lavender’ was released earlier this month and it delivers the catchy chords accompanied with the songwriting Harry values so much.  We would never have guessed it was created in a bedroom using a $50 microphone. However, don’t think that all his future work will look too similar as Harry is open to the evolution of his style over time and we can’t wait to see what he produces next.

The Creative Issue: How did you discover your interest in music?

Harry Wall: Growing up my older brother played a lot of music and my grandad was really into country music. So mostly my family but also my friends growing up in high school, like my friend’s dad really got me into guitar. A lot of people encouraged me into it, so I had lots of support surrounding it.

TCI:  What did you grow up listening to?

HW: Lots of Australian music like Powderfinger, lots of classic Australian bands. As a young teenager I was into bands like Coldplay and Matt Corby, as I got older I got into heavier stuff like Slipknot and then stuff like The Strokes and The 1975. Anything that was really engaging songwriting I would love. I really love music that is just different to everything else.

TCI:  When did you start performing?

HW: When I was 14 I started doing pub cover gigs with a band and we did those gigs for years. They were my introduction to songwriting and then I moved to Brisbane from Airlie Beach. There wasn’t much of a music scene in Airlie Beach but it was much easier to play pub gigs there when you were underage.

TCI:  Who have you been playing gigs with recently?

HW: I have been playing with Dopamine, Fraser Bell and Mum’s Tennis Friends. I have mostly been jamming with QUT bands and stuff because that is where I studied music.

TCI:  What bands do you think have inspired your new music?

HW: I think I feel like bands inspired my songwriting more than my production style. I think with songwriting I am directly influenced by my friends who are musicians. Production wise I would say I am always going for something that is in-between 80s hip hop and like modern pop. I love how they have the most thought out but simple grooves that just work.

TCI:  What does the process look when you create a song?

HW: It is definitely different every time. Sometimes I will sit down with a bunch of ideas and just figure something out intentionally but a lot of the time you are just in a state and you’re playing music and it comes out. I think it is decades of playing random stuff over and over again until the random stuff starts to sound alright. I think of it as carving a marble statue very slowly, looks like trash at the start but as you keep chipping away it begin to look like something.

TCI:  What can you tell us about your new single, ‘Lavender’?

HW: I wrote it two or three years ago but I did like four iterations of it, the one that is released is the fourth one. That final version I started to record at the beginning of this year. I took my time on purpose, I would work on it and then just leave for a few weeks before listening to it again and tweaking it. I try to enjoy it as much as possible. 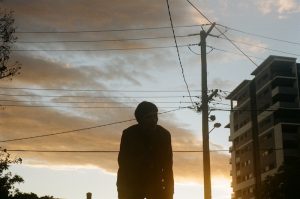 HW: I was sitting in my old room in Kelvin Grove in an old Queenslander and I had a lavender plant on my windowsill. It smelt really nice and I remember it was raining outside which in the song is pretty much the first line. The setting was just a vibe, the window was open and the rain was literally touching my hair so those first lyrics are purely describing that. The rest of the song is pretty much just what I was thinking at the time, just my thoughts and anxieties I guess. I was having fun with it, I didn’t really think it was a good song so I wasn’t really worried about releasing it or anything. It changed a lot over time. Even though the chords are simple, that rhythm was inspired by a lot of 80s disco pop. I wanted to make something that was chill and that you could listen to but not have to really listen to. I just didn’t really want to over-complicate the music.

TCI: What is your favourite Brisbane venue to play at?

HW: Easily the Bearded Lady, it is the people, Nell is a legend. They are always super welcoming and the sound is always really good onstage. Every time I have played a show there it has sold out, obviously that isn’t just for me but the other bands I am playing with too.

TCI: How would you define your music?

HW: Indie pop that doesn’t give a shit. I guess that reflects me, I make music cause I want to make music and if people like it that is cool. In the future I want to try a lot of different genres I hope. I am just interested in working on singles for the next year or so because I feel like I have a lot of different ideas that won’t work well as an EP or as an album. So my plan is to release a bunch of singles that are all kind of different. My next song is more jazz influenced I think.

TCI:  What does the future of your music look like?

HW: That is a hard question because I honestly I don’t know. I would love to be able to just put on a really good show, like visually stimulating and more than just sound. I guess I would also like to produce stuff I am proud of and work that flows well.

TCI:  If you could collaborate with anyone who would it be?

HW: Questlove on drums, Pino Palladino on bass, John Mayer on guitar and that would probably be the best band in the world.

TCI: How has COVID-19 impacted you?

HW: I think it has forced people to live. I think people are always beating themselves up for not writing enough but if don’t write a song for six months that is fine cause it just means you have been living.