Metro Arts: Opportunity for the Future

I come into this report as a relative outsider, so I cannot speak on what and where Metro Arts was before it moved locations to West Village, at least not with any personal relationship. Hopefully that grants me the benefit of a fresh perspective. I arrived to a small media scrum half set up in a strangely covered in shade, and half in the sun standing in front of a bricked alley way. Being around other local media outlets, immediately shifted my understanding of this events significance. This was a project for a renewed Brisbane art sector and a bold test for a sustainable and self sufficient Arts industry.

The new venture would also boast new investments from the private sector into Brisbane art. There was a feeling amongst the small gathered crowd that was a lot riding on this, whether it was just immense potential the project promises, or the uncertainty of the growth it will need to rely on given the constant external shocks of this pandemic.

The gathering was as intimate as the space was. From the alley a purple neon Metro Arts sign hung over the theatre looked crisp even in the day time. The build with the sign was made of smooth brick. It’s unclear from where we were standing what was and wasn’t part of Metro Arts. There was a lot of residential construction happening in the area, even directly above the Metro Arts building. No more than 25 people were at the event including a handful artists who were there to simply represent the art scene. 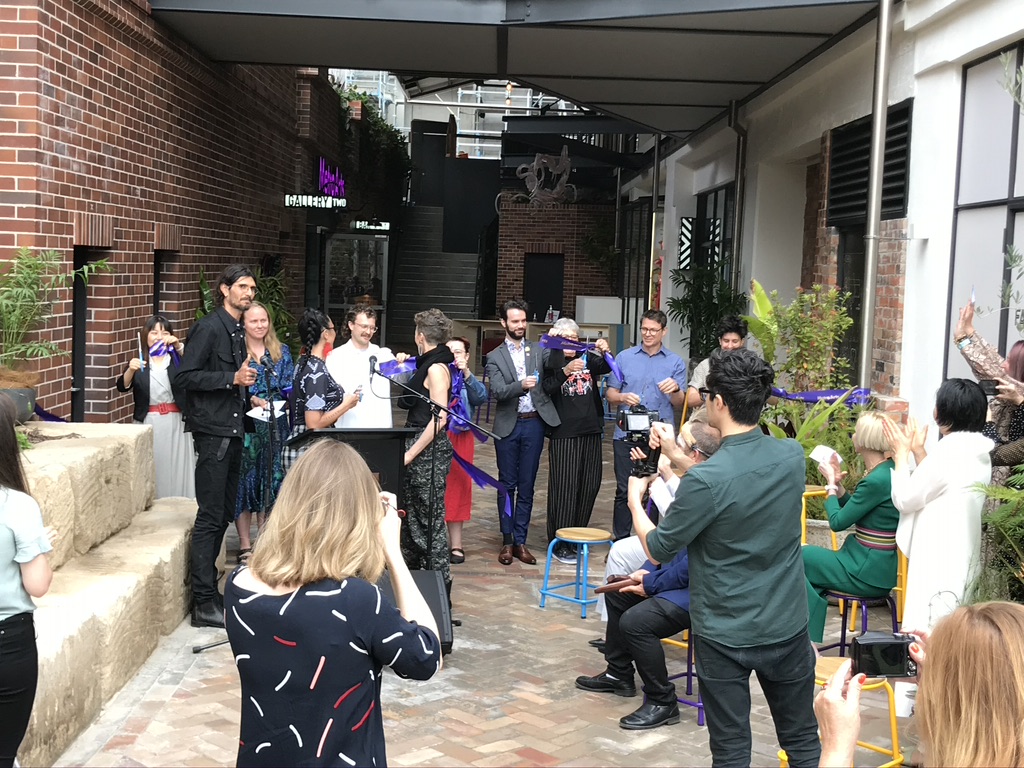 The building was part of a renovated Australian-owned ice cream factory that was in business for decades. At its peak, the factory made tens of thousands of litres of ice cream a day. History, initiative and productivity are baked into the bones of this building. Making them a fitting home for a new art centre in West End. The event speakers opened up by echoing the aspirations and potential the space commanded.

A lot of energy was spent on the important role Metro Arts has had and will continue to have in helping and supporting the local arts community. With the new location within West Village being a testament to that support. Member for South Brisbane Jacklyn Trad, spoke at the event, to the aligning principle of this new Metro Arts location with the Palaszczuk government’s on going dedication to its art sector even during a time of crisis. Dale Harding, Leah Shelton and Lisa Fa’alafi, provided testimonies from the perspective of artists who benefited from these types of spaces.

Finally the ceremonial ribbon is cut and we are allowed to explore the space. There is an outdoor sitting ares in front of the bar. I had a brief exchange with Jo Thomas, the CEO and Creative Director. She told me the works within the glass panes, and the hydroponic tubes that hung over head were to be the first of many works that would be installed within the outside lounge area. To the right is one of two galleries, the space is dark and long. The potential of the space is evident, as you walk through it. There was a work inside that incorporate flashing lights and audio tracks but I couldn’t get my head around it on my brief inspection. 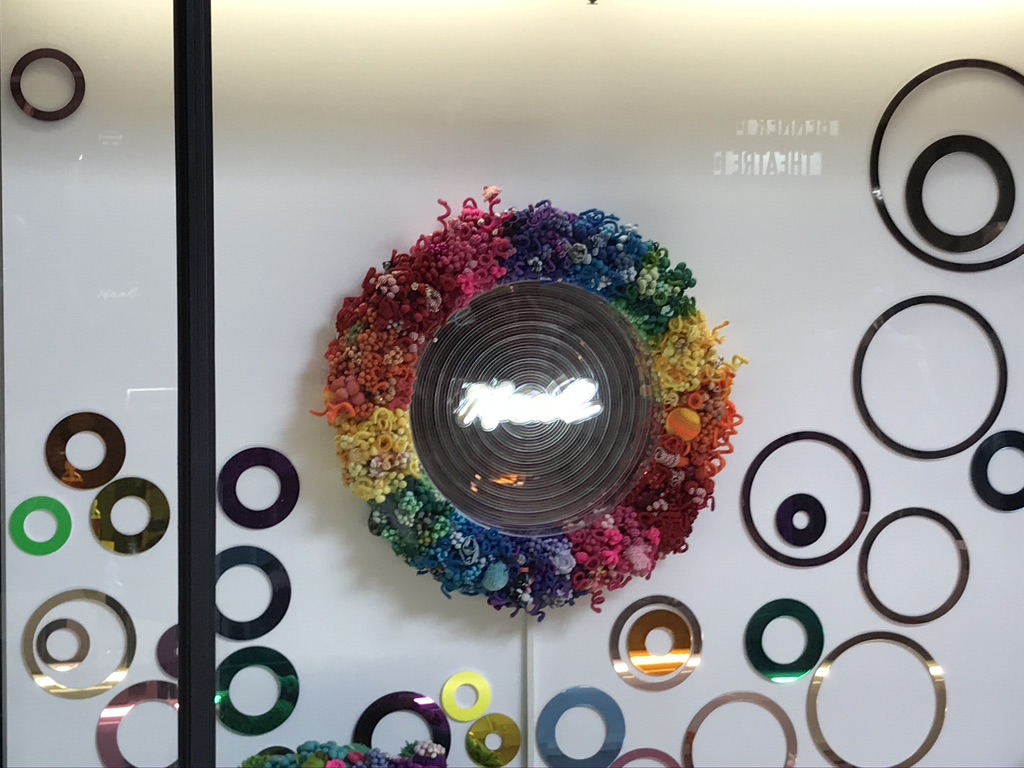 To the left is where the Theatre, the second gallery, the Box Office and the Bar are. The second gallery is presenting a glow in the dark display of spinning lights and shapes. The room is more of square shape than the first. Like the first gallery the potential of the space is high. It is easy to imagine a number of different works that could be hosted within the room. Downstairs from the second gallery is the Theatre. Equipped with COVID conscious seating. The underground theatre is looking to open up at a decreased capacity to further ensure social distancing measures are held up. The theatre was small but felt right in line with the spaces I had seen upstairs. The best way to describe it would be intimate, which honestly felt kind of nice.

With the Brisbane Festival kicking off last week, the excitement behind Metro Arts and this new location began to click for me. Two modern galleries, a theatre, and a bar in West Village, steps away from one of the more eccentric food courts in all of the CBD. As new residential buildings are being built all over the suburb, the new space is a clear and measured investment into the Brisbane art scene. Which matches the more business minded intentions of Metro Arts new investors.   I had the opportunity to briefly speak with Metro Arts’ Board Director Fiona Hawthorn and I asked her about the ways Metro Arts has changed entering into this new chapter. 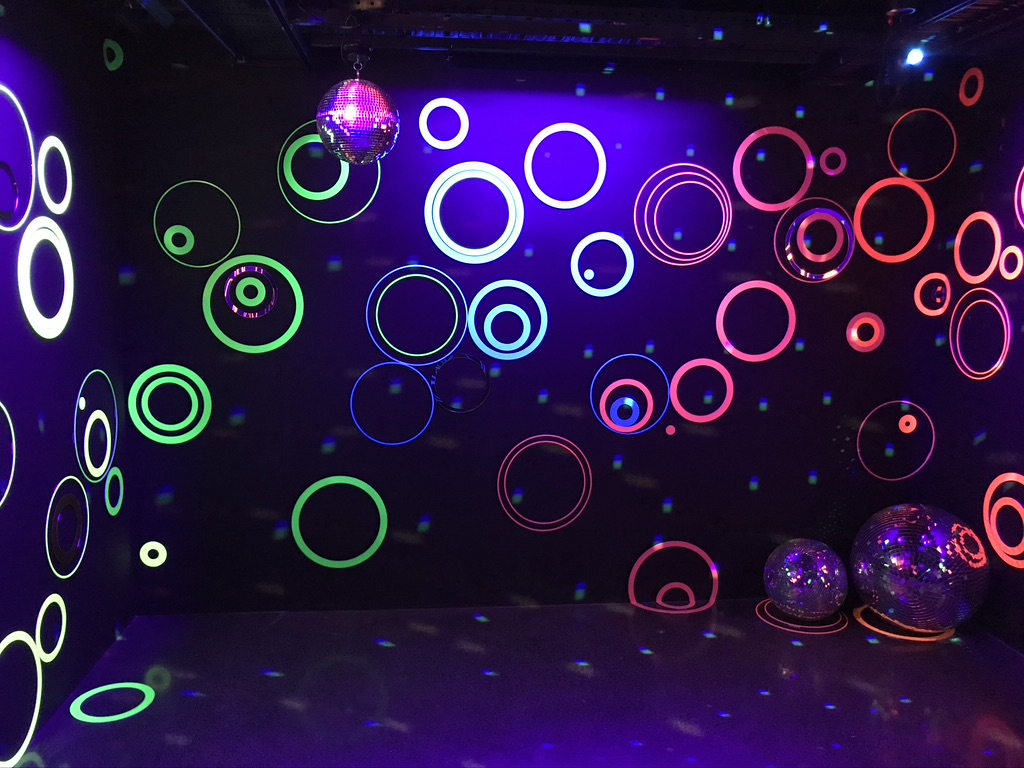 The Creative Issue: How has the introduction of private investment changed Metro Arts? Has the business model changed? Has any of its goals changed?

Fiona Hawthorn: One of the things thats very important to acknowledge is that the board all those years ago, made the decision to purchase an asset for us to leverage off. That has been transformative for us, because that foresight has meant it so we have had an opportunity to invest and create a future thinking theatre company for Brisbane’s creative (art) centre. 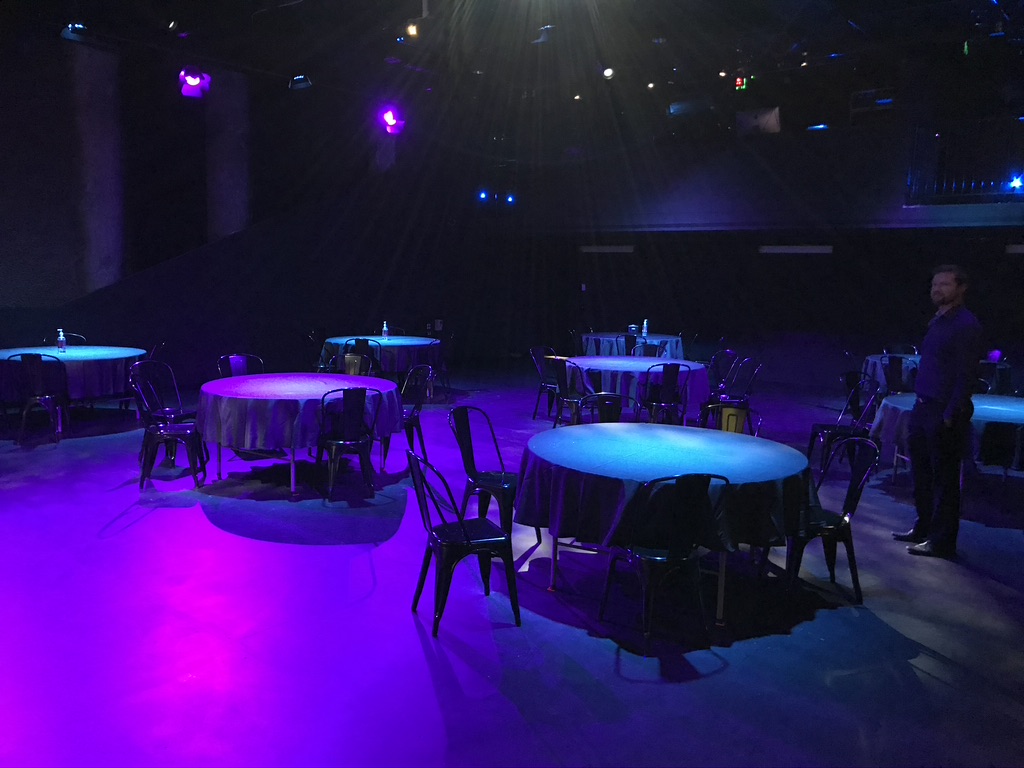 So I think the business model has changed. It’s had to change. I think about the concept of sustainability and partnership. I also think that governments go so far as to provide financial support and such things, but then it is up to organizations and boards to take responsibility to find that (key) partnership. It’s time for Brisbane to come of age and invest privately in the future that they want to have. So we are grateful that the private sector has come on board to help us craft a future for community arts and the community’s artists.

TCI: Given the way in which COVID-19 and the prospect of future external shocks like it. Has there any thought on survivability and how Metro Arts can continue to stay afloat?

FH: COVID-19 has taught us a lot. Whether we wanted to learn those lessons or not. We’ve had to. I think those lessons for us as a community is that we really devalue artist. We really devalue art and the ability to be creative. Lockdown meant we were separated from people that we love, and experiences we love. So it has meant that we’ve had to think about how can we bring those things into different venues and through different vehicles.

The goal of Metro Arts under the chair of Michael Cottier has been really committed to the idea of sustainability and that we (the current board) should be forgotten. I think that in 30 years times a journalist should be speaking to a board member and they say ‘we don’t know who was the Creative Director, or board member when this opened but we are still here talking about it.’

TCI: How does an artist who has just graduated or is currently studying. How do they gain access to Metro Arts? How do they participate as an artist within in this space?

FH: They come here and turn up. Say I’m an artist I have passion, I have vision, and this is what I want to do. And Jo (Thomas) in the tradition of her predecessors will say yes. She will say ‘let’s push those boundaries.’

TCI: What does success for Metro Arts look like to you?

FH: Success for Metro Arts is the children of artists come back because it’s still here. That there are still events opening. That we are still pushing boundaries. That art is delivered in ways we haven’t even thought about. That it has done so because the money has been invested wisely and we have lived within our means. But we have continued to challenge and honor everyone who has gone before us while creating space and vision for those who follow.

With the Brisbane Festival in full effect, I left the event ultimately excited for the Brisbane Art scene as whole. It was exciting that a future for art in Brisbane was being pushed for even in a sea of uncertainty. I’m eager to see if Metro Arts will become a destination for creatives, a place new and young artists can ‘cut their teeth’ so to speak. One of the small upsides to global travel restrictions is the idea that they may force countries to look inwards for their entertainment. I hope Metro Arts stands the test of these crazy times, and I’ll be looking forward to coming back.