In a better world, jazz fusion trio Milton Man Gogh would be in Europe right now to promote their bizarrely bootleg soundtrack of the Queensland beer; but in an unexpected sequence of events, the “uneXXXXpected” tour never made it to soundcheck.

Double-bassist Zac Sakrewski and drummer Benjamin Shannon were rendezvousing with tenor saxophonist Andrew Saragossi in his current home of Maastricht as things went pandemic, merely one week out of their first date.

Coinciding their placement on the Belgium International Jazz Competition, the ad-hoc tour had not yet been announced. While trying to navigate this setback, they broke the news with ‘Pub With No Ear’, making use of Chloe McAlister’s baguette-yielding artwork as a souvenir of their European non-tour. Back now in the land of mangoes, we checked in with Zac to find out what’s going through MMG’s minds as they unwind in quarantine.

The Creative Issue: Announcing and cancelling a tour at the same time seems be the trend this last week, but to be on location already is a rough way to get cancelled. Can you give me some background into what this tour meant for the band?

Zac: Yeah, it was a bit shabby to say the least! We booked this tour pretty hastily after getting into the finals of the Belgium International Jazz Competition; it’s a long way and we wanted to really make the most of the time there! It takes a while to get tour dates lined up in Europe, but we somehow managed to pull through a respectable list of gigs. It was the first time Milton was due to go international so we were super excited to get over there and play. To be home now, while a relief, is pretty devastating in multiple respects but there’s so many people who are out there in much worse circumstances.

TCI: How long did you contemplate if the gigs could go ahead before you had to call it? At what point did you know?

Z: The day we pulled into Maastricht (where Andrew (Sax) is studying) is when the emails started rolling in. We were eating dinner in Andrew and his partner Helen’s studio apartment and waiting for Ben to arrive from Liverpool and our inboxes just started filling up; it was actually quite surreal and all we could do was laugh at the ridiculousness of the situation. It only got more comical when Ben arrived and the competition was officially cancelled; the news started getting crazy, all services started closing and it was like the world stopped. The way this has completely knocked everything on its ass is just bewildering to watch – Such a unique time to exist in the world. 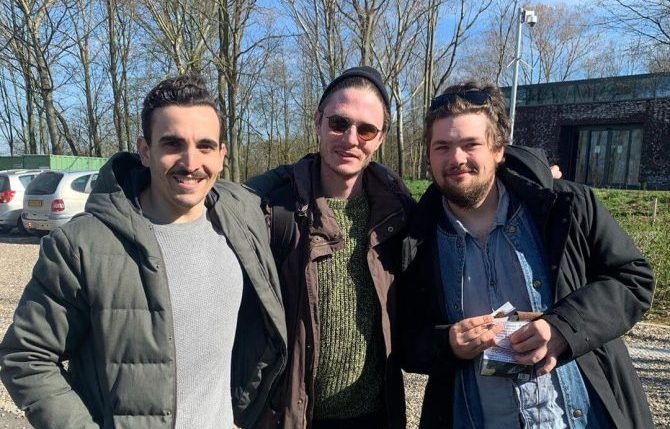 TCI: Were you able to get compensated for any lost gigs/able to recover any hotel deposits etc to offset the expense of leaving Europe early?

Z: To be honest, while we suffered a pretty huge financial loss as a band, we are thankful since it could have been a lot worse for us as a band. We were pretty lax when it came to organising accommodation so we hadn’t actually booked any accommodation outside of Maastricht or hired the second van for the tour. The car I hired to get to Maastricht was refunded for the remainder of the time and our change of flights home weren’t too expensive at the end of it all. On the other hand, Ben is still chasing up Expedia, Andrew’s gigs have dried up with his bands Meatshell and AHA Trio and I have a double bass I bought for the tour (that didn’t happen) that’s still in Maastricht and has to get home somehow.

TCI: Obviously the tour is a bust, but what other impacts have you had as musicians?

Z: Well, Ben and I aren’t able to go outside, so that’s pretty unfortunate. In all seriousness though, we both teach in schools and everyone has been fast-tracking ways to successfully teach remotely so I reckon, while not unscathed, we will be fine. We really feel for those who have lost all of their work and with things being so unpredictable, we could easily lose our job security too; Andrew who works in event organising for Jazz Maastricht is definitely in the same boat. It’s all very up in the air!

TCI: Have you found a way to stay positive?

Z: We’ve found a few ways, to be honest! Isolation can be pretty weird, so we’ve made do with things around the house. Ben’s parents (who he still lives with) brought over a care package for him so he’s been set smoking ciggies and playing Harvest Moon. In all seriousness though, We’ve been keeping ourselves busy here. Whether it’s listening to Centrelink’s new, phone-based streaming service, playing instruments, writing music or trying to sleep to speed up time, there are always things to do! We’ve had a lot of support from family and friends bringing us supplies and some good thoughts and we also take some solace in the fact that while the tour didn’t necessarily go according to plan, it was a super unique experience to be in that part of the world when everything got a little too real. Oh yeah, and we laugh at our situation constantly.

TCI: With the release of ‘Pub With No Ear’, do you think releasing more music in the coming months is going to be a priority? Does this situation impact your ability to record/release music?

Z: Well, having Andrew on the other side of the world grinds our recorded output to a halt so Milton won’t be recording any new music till June (if that!). Luckily we can blame our lack of recorded output on Andrew’s masters degree rather than the elephant in the room. Having said that, when you have more time to create, spend the time creating. We have the gear here to continue releasing music, at least in certain projects. Ben can’t really go do rehearsals with Kodiak Empire due to the self isolation and I can’t get into rehearsals with Faux Bandit, but maybe it’s a good time to write new ideas, study your craft or start that new lo-fi dream-pop EP you always wanted to make since you heard 2 by Mac DeMarco. Overall, I think every creative person should just be shameless in their production of new ideas: the time and stimulus are there!

TCI: Not that anyone knows what’s going on right now, but do you have any ideas of how Brisbane musicians could stay afloat in these circumstances?

Z: Everything is going to go online as best as it can. I’ve already seen local musicians playing for people through Instagram live and Facebook live, teachers are getting on with the job over Skype and things are definitely getting more remote. How we go on the long term is still very up in the air I reckon and I wouldn’t want any of these quotes to age badly. We will see how things pan out in the short to medium term, but Milton Man Gogh will be back soon!

During your time in self-isolation, keep up with Milton Man Gogh on Facebook and listen to their new single on Bandcamp.

A Day In The Life: SUNFLOWER