Miss Juneteenth is a modern odyssey through the depths of a single mother’s struggle to carve a new life for her daughter. 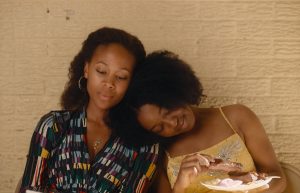 Miss Juneteenth takes place in Fort Worth, Texas and is centred around single mother Turquoise (Nicole Beharie), as she prepares her daughter Kai (Alexis Chikaeze) for the upcoming Miss Juneteenth beauty pageant. Ronnie (Kendrick Sampson) is Turquoise’s constantly smouldering but incompetent baby daddy, who does not know he is in competition for Turquoise’s heart with Bacon  (Akron Watson). The light shines brightest on Beharie who portrays Turquoise with exceptional honesty, and charm carrying this film from start to finish minutes.

The film unfolds like a rolling flurry of blows. With each obstacle pushing Turquoise farther from her goal of simply supporting her daughter. Plagued by money problems, costly emergencies, and a failing support system Turquoise struggles to catch even the smallest of breaks. Miss Juneteeth covets beauty pageant’s in a really intriguing way. Most interestingly seeing them as an avenue for opportunity. That winning the pageant is getting a new lease on life, securing a new future through prize money or scholarships. This gives the film an almost sports film aura, at least in terms of the stakes at play. Fundamentally this film is about motherhood. A modern motherhood, where the fantasies of being ‘a stay at home mother’ are left to works of fiction. Where raising a kid, with limited money, and limited time, while working one or even two jobs is a norm for many mothers. 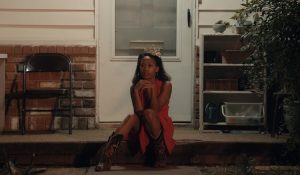 Though its themes are heavy in the macro, Miss Juneteenth is by no means an ugly film. It’s shot compositions that are striking, colourful and contrasting. There is a specific scene where Turquoise is sharing a dance with Ronnie. The two are backlit by clashing lights in an incredibly tender scene perfectly captured by director Channing Godfrey Peoples. The film has its share of laughs but it’s not here to be super lighthearted. I go back to the word tender as a way to describe the movie as a whole.

This film is as an interesting window into both modern and American life. Centering a story about motherhood around something as outlandish as beauty pageants add a nice gravity to the concept on large. The film takes its premise and characters seriously, allowing the movie the freedom to feel heavy and gut-wrenching like the type of events pageants are. I only wish the ending was more rewarding given the scope of trials Turquoise is put up against. I highly recommend seeing this movie and fortunately for you, it released nationwide on October 8th.

The Details:
What: Miss Juneteeth
When: October 8th
Where: Nation Wide; except for Victoria