Straight out of France, Monsiuer Chocolat is an enthralling yet tragic story about the highs and lows of circus fame.

The film follows Raphael Padilla, a Cuban slave turned circus extraordinaire in the 19th century. In the beginning, we see him introduced to the crowd as Kanaga the Negro King, before George Footit, a well-known clown on the verge of becoming obsolete, approaches him.

Together they create Footit and Chocolat, an act that exploits the audienceâ€™s racial tendencies. Footit teaches Raphael to â€˜take the slapâ€™ and give the audience an air of stupidity. Their act takes the crowds by storm and a Parisian circus approaches them with an offer to act in front of thousands.

They soar to fame, but it doesnâ€™t come without its problems. Raphael begins spending his money on extravagant and unnecessary things. He also develops a dependency on alcohol and gambling. Raphael dreams of being a theatre actor and leaving the derogatory circus act behind. 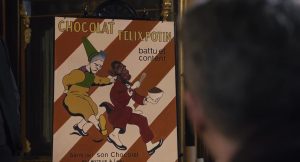 This movie is based on the true Raphael, and he did not have a happy ending. It is anti-climatic in a sense, as you are left with a feeling of Raphael being robbed of what he deserved. There was no big moment for him and he just faded into the background.

The acting in this film is spectacular. Omar Sy (Raphael) is compelling in his performance and has the flexibility to play the exuberant yet withdrawn character. James Thierre (Footit) is stunning; he brings a hard edge to an emotionally raw character.

The director, Roschdy Zem, had ample opportunities to explore the racial themes of this story. However, the film revolves around the issues of addiction, whereas race takes the backseat. Apart from this, the direction is well done, switching from the highly colourful circus scenes to the dark and dingy dressing rooms.

All in all, it is a highly moving piece that allows you to get lost in the French language and the world of circus performers. It highlights the contradiction between performers and their true lives. â€˜Tears of a clownâ€™ has never been so relevant.

Monsieur Chocolat is playing at Palace Cinemas, head to their website to find out session times.

Great Art for a Good Cause