Montaigne on Complexity and Common Sense

Voltaire said that ‘common sense is not that common’, and now Montaigne is bringing her own philosophies to the matter in her new album Complex. We sat down for an enlighting chat about the concept of complexity, common sense, and the recent renaissance of Montaigne‘s own music.

The Creative Issue: How was your approach to this album different to the last one?

Montaigne: I used a lot more collaboration; there were a lot more people who produced on this record so Tony – of course catch him around because he’s my guy – there’s like six or seven other people on this record who have made music with me, so they’ve brought all there influences and styles to the table so I think that’s made for a really diverse and interesting record

TCI: How do you feel your style has evolved?

M: I think my voice has changed significantly, it’s gotten stronger and my enunciation has changed so that’s brought me to different ways of singing and the way and range in which I use my voice. My music taste has also expanded and broadened and that’s filtered into the music as well, eating new genres and new composers and synthesizing all that into something that works. My sensibilities tend towards pop melodies, but I’m very into weirder stuff. I think this record is almost an augmentation of Glorious Heights where I tried to take my pop sensibilities and make them a little more baroque or chamber pop, and this one was me being “let’s make it even weirder”. There’s all this lush instrumentation and some pretty sounding synth and interesting moments.

TCI: Who have you been listening to recently?

M: Oh gosh, so many. I listen to a lot of music. I went and saw Mary Lattimore the night before last and that was really good. She’s a harpist and composer. I listen to a lot of New Zealand based stuff, so Aldous Harding, Tiny Ruins, Chelsea Jade – I think NZ has got some really special stuff going on. I’ve been listening to Bill Callahan, a lot of Brazilian and Portuguese music, I’m very into Bossa Nova right now. That’s a sample for you. This is what I’m listening to now, but what I was listening to when I was making the album was just as different and varied. My music taste is eclectic, and I think that’s what comes through in all my albums, that element of eclecticism. 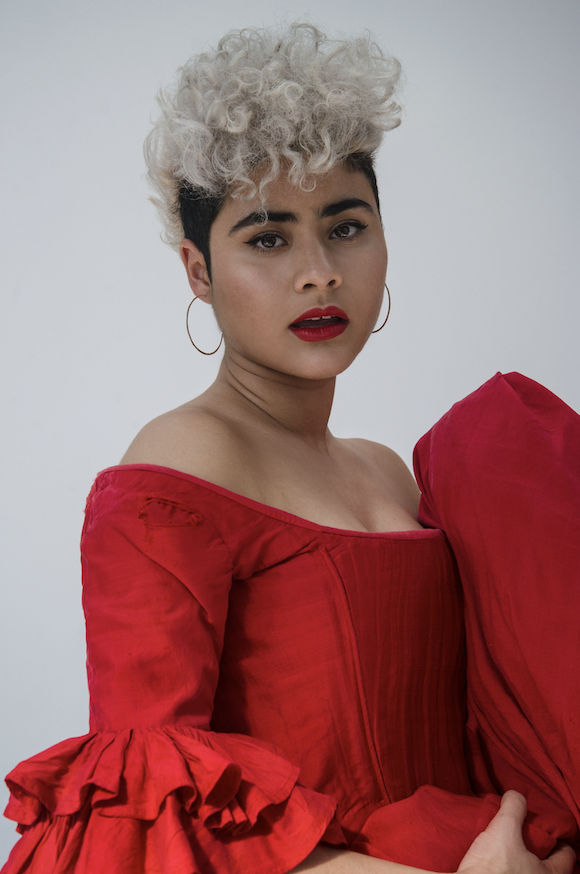 TCI: Speaking of different, let’s talk about you performance style. It’s been described as theatrical – why do you think that is?

M: Probably because it is. I’ve not been trained in theatre at all, but I exaggerate everything on stage. That’s not deliberate, it’s kind of just what my body and face have to do when I’m singing these songs. I think now that I feel liberated of mind enough to do that it’s just what I have to do. I throw myself around a lot and I try to move in such a way that complements the feeling of the songs. My voice is kind of crazy and I give no fucks about what my face looks like while I sing. I’m just sort of a whirlwind all around the stage and that may be inherently theatrical.

TCI: The title and theme of the next album is Complex. Could you elaborate on that a little?

M: Yeah! I chose the title a couple of years ago. I wrote the titular track maybe three years ago. It felt right then, even not knowing what the rest of the album was going to sound like. At the time I thought ‘this album will be called complex, it’s going to be about this and sound like this’. Those two statements turned out to be totally contradicted by what actually happened, but the thing that stuck was the name. I feel like you could almost name any album “complex” and it would make sense, but it felt like a particularly good name for this one because I think lyrically it speaks to the complex we all have as individuals and the ways in which we are insecure, mostly me I guess but I don’t think I’m the only one in the world with insecurities so people might see themselves in it.

Also just the idea that things are complex because they are, and I think some people live life thinking they’re not. You know how that phrase “it’s just common sense” floats around? What is common sense? A lot of people I’ve met who say that don’t seem to understand what that means, and I don’t think there is common sense. I think things are really complicated in life, and of course there are laws to regulate the justice dealing of certain actions in society, but in terms of the way we all relate to each other interpersonally and socially, it’s all extremely dense and obtuse, and people miscommunicate all the fucking time, and it’s really hard to be a human with other humans in the world we live in. And this album tries to speak to that in a big way, or at least acknowledge that indirectly.

TCI: If you could collaborate with any one artist who would it be?

M: David Byrne. Though that said, I don’t known if I’d want to make music with him. Maybe I would. The thing is, I think my real answer to this question isn’t very sexy, because I think it would be one of my friends that I know that I just haven’t made as much music as I’d like to with yet.  Like my friend Dan who lives in LA who’s amazing; we co-wrote a song together earlier this year and I just thought ‘I need more’. Or Andrew, who’s a wonderful composer and singer/songwriter from New Zealand and it would be cool to do something with him one day, but maybe that will never happen. I think the people I know are very cool.

TCI: Let’s finish off on a light hearted note – what’s the silliest thing you’ve ever done?

M: Ooh that’s hard because there are so many. And all them are more or less serious, like ‘Jess you fucked up but that was silly”. I think maybe hurting some of my friends in a way I shouldn’t have – to me I’ve done some silly things that I didn’t intend to happen, but I should have taken a step back.

Silliness aside, Montaigne is on a role right now with her musicality. You can check out the new album here, and book tickets to her upcoming tour here. Watch out for our upcoming review of what is sure to be an absolute banger of a show.