More than an Exposition of Hangovers with Kacie Anning

We had aÂ chat with creator, director and writer Kacie Anning about the web-series ‘Fragments of Friday’, her experience making it and why now is such an important time for female creatives.

It began like any other Facebook wander. What should take a person five minutes nearly always turns into an hour. A quick glance at what was happening in the world, what my friends were up to and what stupid news story was going viral, and then I saw it. It was an advertisement forÂ ‘Fragments of Friday’, a web-series self-described as piecing together the events of the night before â€“ a premise that is almost not unfamiliar to most of us. Bold, daring and a touch crazy, this Aussie comedy offers the perfect combination of relatability, heart and insanity that replicates any good relationship – by this I mean human relationshipsâ€¦ not just alcohol-fuelled ones.

For Kacie, film is her natural state of creativity and comedy has always been a calling card. â€œSometimes I have to resist making things not funny if Iâ€™m not making a comedy.â€ 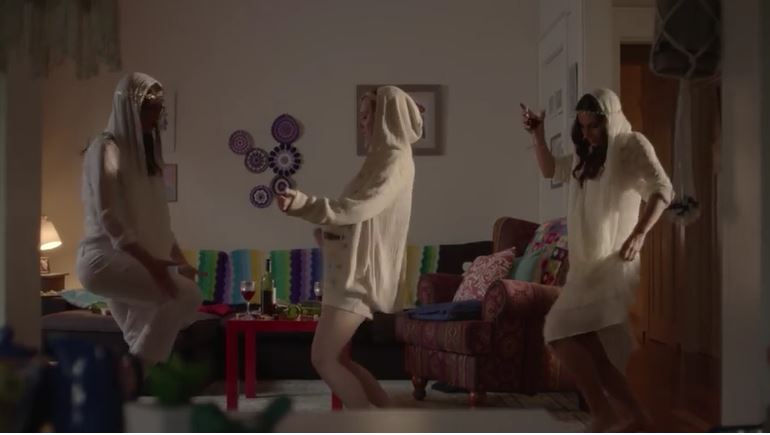 Fresh out of the Australian Film, TV and Radio School with an impressive list of shorts, critical acclaim and awards from 2012 under her belt, engaging with the uprising of web-series was the next challenge for Anning. â€œThe web series format for me was about what can I make on an incredibly low budget that can be contained and repeatable. Basically, a very small sit-com. I raised $6000.00 through Pozible, we made Series 1 and it was a love job for everyone.â€

After being picked up by a major production company and receiving multi-platform funding from Screen Australia, the road to Series 2 was a three year process. Writing about what she knew was a definite starting point for Anning on ‘Fragments of Friday’. â€œAs a filmmaker, I am a young filmmaker, I think itâ€™s kind of natural to draw from what I know and luckily most of it has been comedy. My nature is that I am an observational person and so when I hear a funny thing or see a funny thing I make a note of it, those are all textures that help build towards a world.â€ 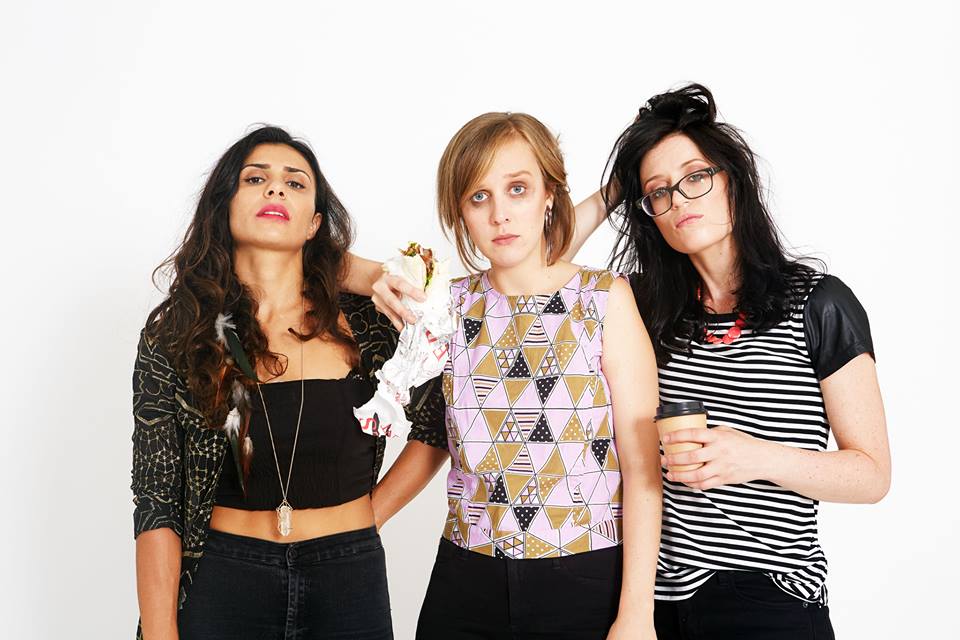 ‘Fragments of Friday’ originally began from an idea based on the experiences of a close friend. However it grew beyond that as characters Alex (Kacie Anning), Sophie (Sarah Armanious) and Maddie (Madeleine Jones) found themselves in tricky situations. â€œYou do start to get more inventive about it, less from personal experience and more into sit-com. Itâ€™s just about going what would be funny, what would be weird.”

For anyone who has not seen the series, these girls find themselves completing burger challenges, miscommunicating over nut allergies, mistaking a day on someoneâ€™s yacht as being smuggled as sex workers, navigating adoption scandals and being misled on what one defines as a â€˜holiday houseâ€™.

â€œThere are certain things, especially with series 2, that I sort of feel like we havenâ€™t seen those types of jokes before. So there is the pool party gag where they think they are going to a pool party and itâ€™s a snooker party. We invented â€˜Church Wine Drunk Dayâ€™ for episode 5 (Series 2). My producer [Courtney Wise] and I just get in the room and brainstorm this stuff and then I go away and write. Whatever weird shit comes out, comes out.â€

‘Fragments of Friday’Â has a great mix of emotions and showcases some great relationships and friendships, finding that balance between joking around and tackling serious issues was key to connecting to audiences. â€œWe mostly consider ourselves a comedy with a touch of drama every now and then a touch of poignancy. Itâ€™s about levity and my producer and I worked very, very hard to strike a tone. I think thatâ€™s why ‘Fragments’ does resonate with audiences because it does feel like something rather than an exposition of hangovers. Itâ€™s something we work really hard at and something Iâ€™m really proud that we have managed to achieve with the show. I think the casting works because there is a genuine friendship there.â€ 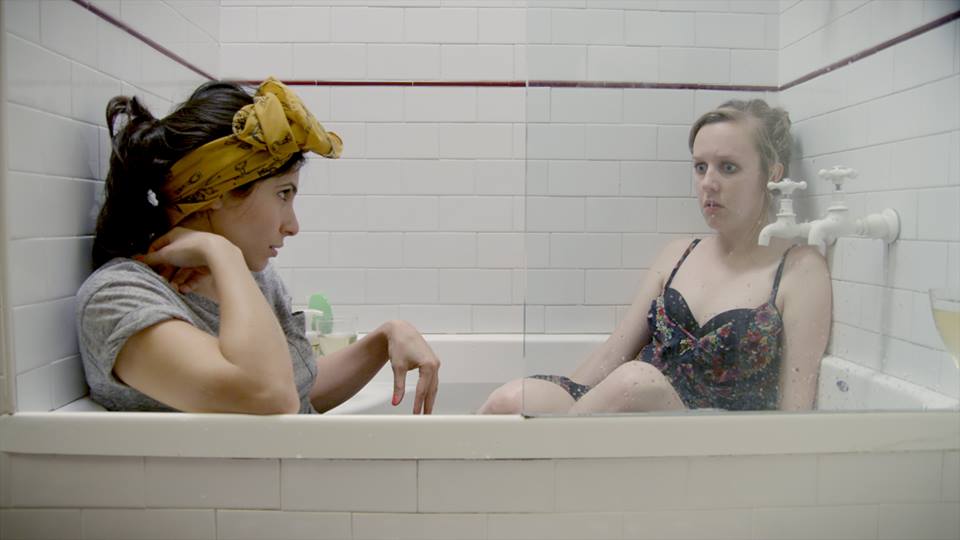 I pointed out to Kacie how relatableÂ I found the show. Even though it can be crazy at times, my thought process very much was â€“ yeah I can see myself doing that.

â€œI think thatâ€™s the current landscape of female comedy at the moment. You know, we feel like Girls is too-far-drama with comedic moments. Then there is Broad City and we love Broad City and they sit at a far more relatable end. We wanted to sit somewhere in the middle.â€

It has been a massive year forÂ Kacie Anning. Apart from ‘Fragments of Friday’, Kacie has worked on two other web series, collaborated with theÂ Sydney Opera House, written feature filmÂ scripts and struggled to find any time to have a break. â€œNow it is back to development land. I am ready to start talking about other ideas. Lots of comedy ideas and usually female-based comedy as well.â€ 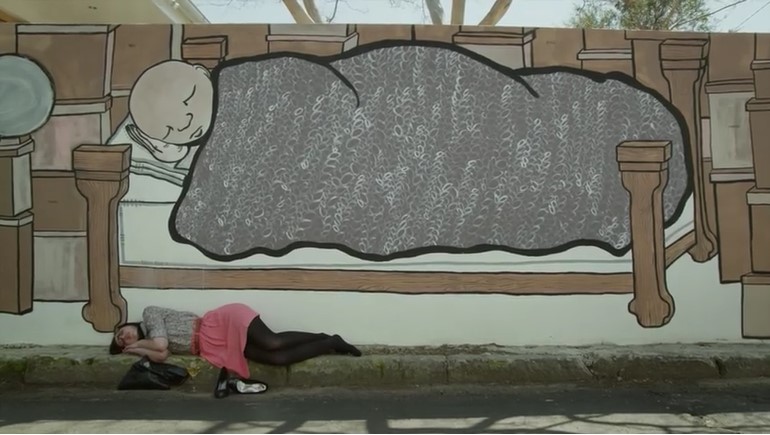 With Screen Australia recently announcing their Gender Matters initiatives to combat gender imbalance within the screen industry, I asked Kacie how she thought this would affect filmâ€™s working culture. â€œI think itâ€™s good. Itâ€™s an incredibly ambitious set of initiatives that theyâ€™ve got. Screen New South Wales has also introduced a quota. Itâ€™s all about addressing an imbalance. In another industry we would look at and go what the hell is going on there. There are only 16% of women in Australia who are directors and you look at that and itâ€™s pretty crazy.â€

So what are Kacieâ€™s thoughts on our current Australian film industry? â€œWhen we have a system that is funded by taxpayers and sort of a grant system, itâ€™s important thatâ€™s reflective of A) the practitioners out there. And B) that is more reflective of the audience as well. I think in Australia we tend to make quite masculine films and we have a masculine history. Every single female success, such as The Dressmaker at the moment, is all good. I am only encouraged by all those things and I think itâ€™s an incredibly exciting time to be a female creative.â€

Filmmaking in Brisbane: An interview with Chris Sommers