An indigenous man stands with his back to a grand colourful canvas: ‘Australian Art Does Not Exist’. This is poet Lionel Fogarty in front of Richard Bell’s Judgement Day.

The spacious arena of gallery 13 in the Queensland Art Gallery is surprisingly full. 70 to 100 people dither and shuffle in polite anticipation. The gallery staff wheel an amp towards the acclaimed Australian poet and activist. 8 poets were charged with creating a response to various paintings and artworks in the QAG. His is called ‘Make the Art Words’. Ekphrastic poetry is poetry made explicitly in relation to another artwork. This offers a re-imagining of the painting or artwork and can create a vivid matrix of varied creations engaging with each other. There is a performance element and very real discourse opened up in a direct way with artist and assemblage. Mr. Fogarty’s poem reflects Bell’s sense of dissatisfaction and dismay in the relationship between indigenous and ‘non-indigenous’. There is no Australia art as there is no Australian. There is no Australia, just a collection of shared and separate histories. At one point Mr. Fogarty seems to spit into his hand and open his palm towards the ground: “Australians don’t have the right to Art/ But inhuman white artless”. 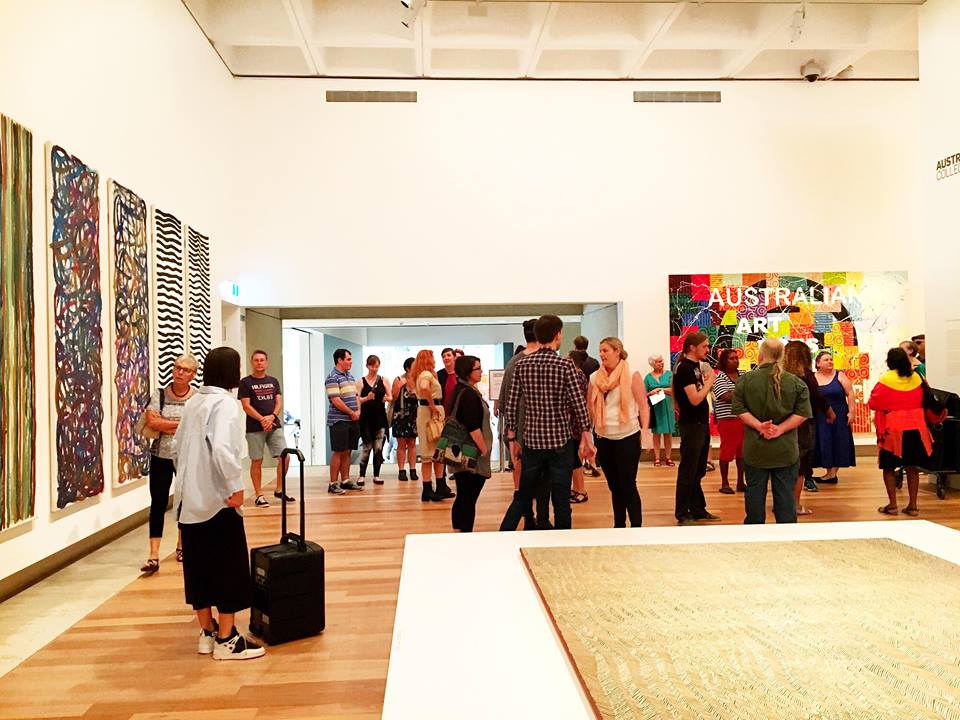 Next is M.T.C Cronin’s response Lorca’s Horse by Gordon Shephersdon. We are lead by each poet towards the next artwork. The poet guides us towards their reflections physically here. Frederico García Lorca was famously shot by Franco’s nationalist forces and buried in a lost grave, rumored to be beside an olive tree. Ms Cronin’s poem reflects and expands on this idea: “The Murderers and the lovers kiss/ beside the stand of olive trees.”

Oftentimes the acoustics of the gallery and the elusive quality of what poetry is can create an evanescent. This doesn’t necessarily detract from the experience but rather encourages a continuation, maybe Derrida would call it aporia. You’re grasping at what the poet is saying and you begin to create your own understanding permeable and nuanced. You begin to play creator of your own narrative.

A young poet Zenobia Frost begins her own poem ‘Bathers’ written in response to Rupert Bunny’s 1906 painting Bathers. Here we see the poet’s musings on feminine beauty, identity and individuality. In the female only public bath, the women are free from the male gaze and are thusly free to imagine and create their own understanding of body and self through the reflective but clear image of the water: “I revel in mutation human portmanteau a hybrid… I can/ Open my eyes underwater and see clearly.”

Not all the poets wrote about paintings strictly. Theresa Creed wrote about Sonja Carmichael’s wicker baskets: Deranji Dabayil. Another poet Nathan Shepherdson wrote about Dale Harding’s Wall Composition in Reckitt’s Blue. The poets here are completely free to instantiate their own interpretations. Interestingly Angela Gardner’s poem ‘Without Title’ was written about Gordon Bennet’s Untitled 1991. Like the painting the poet disregards a title to bring attention to the ineffable damage of post-colonialism, displacement and death. Poet David Stavenger gave an excellent and acerbic reflection on manhood, fatherhood and ageing. At the end of his poem, the family wake to find the man of the house has eloped with the family pool. 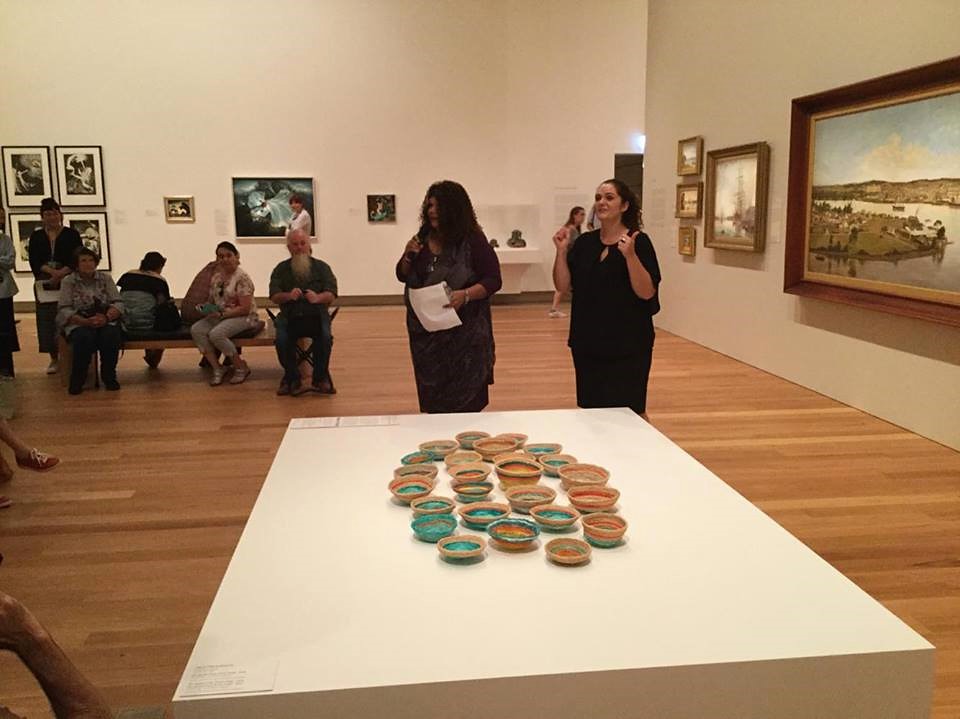 Jarod Bruinstroop’s poem ‘Bribie Island,1965’ reflects upon Ian Fairweather’s Bus Stop,1965. The painting itself is a modernist work, melting dark colours with inscrutable faces and frames. The bus is a melting pot of human emotion, sensibility, occurrence. In the second section of the two-part poem this sense of shared experience and pluralism is emphasised through the single stanzaic style along with the repeated use of the word ‘with’. 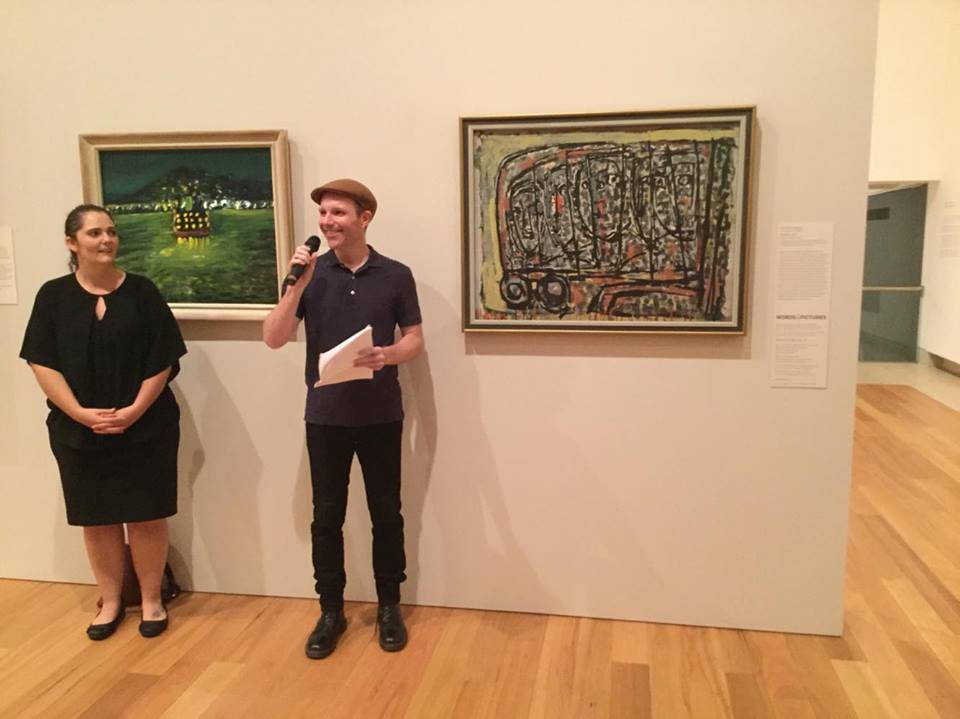 This walking tour is not just an act of seeing an artist’s vision but also about creating an environment where the participants become poets themselves. Creating, envisioning, interpreting.

Moving Words: Poetry Walking Tour was held on the 14th of April and is part of an ongoing engagement with artists and artworks in the Queensland Art Gallery. The poems are displayed beside the artwork and in their completed form can be found in this link to their website.

The Ugly Side of Art? Patricia Piccinini’s Curious Affection