Mr Rogers: There Goes The Neighbourhood 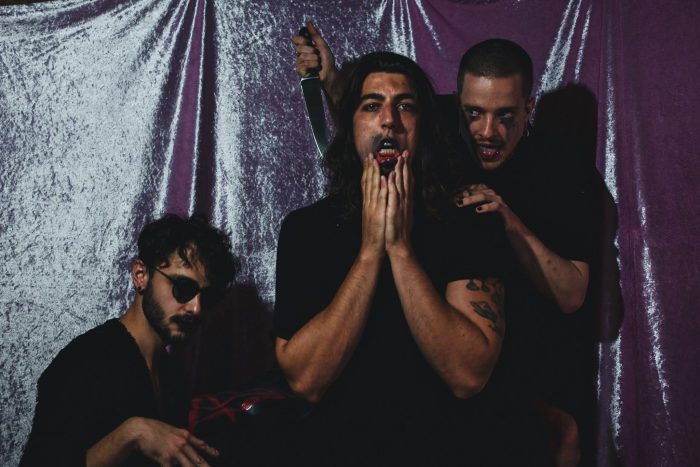 Alternative punk rock band Mr Rogers‘ frontman talks Marilyn Manson inspiration, getting back on stage after a hiatus and protesting against fascism of religion and hypocrisy in the media and politics.

Following their latest single, ‘Our Sympathies for the Australian Christian‘, Mr Rogers are back, better and ready to get back on stage to provide patrons with some heavy punk rock, and possibly a good scare too. Joined by Miles Hatton (keys), Chris McCulloch (drums), Bryn Arnfield (bass) and Harry Ehnhuus (guitar), vocalist Brad White tells us about their future plans and upcoming EP, There Goes The Neighbourhood.

The Creative Issue: It’s amazing that you guys were able to come back together at a time like this. How has the creative process been during the pandemic?

Brad White: Creative process hasn’t been too hard actually. Other than my computer carking it and making demo making 1000 times harder, we’ve managed to smash out new songs now we’re back on track with our sound. We’ve even got a keys player now to add some more dynamic to both our sound and live performances.

TCI: Who or what were your main inspirations behind your new music?

BW: A lot of our inspiration comes from the really early Marilyn Manson days. I’m talking from the Spooky Kids era demos to his first album Portrait of an American Family. I love that blend of shock and punk and thrash without sounding too gimmicky.

TCI: Was there any particular reason Mr Rogers took a hiatus?

BW: We went on hiatus to reform our sound a bit. I wasn’t very happy with the songs we were playing and our shows felt a little forced. I wanted to go in a whole new direction with synths and electronic stuff, but when I got to doing it I realised I can’t actually play keys for shit. Every time I tried writing stuff it kept going back to that old Mr Rogers thrashy punk sound. I walked past the make up aisle in Coles and saw makeup remover and it just sent me down memory lane with the old Mr Rogers shows with our smeared lipstick and ripped stockings. We used to look like drag queens from hell up on stage. So with those two things combined I knew I wanted to go back to Mr Rogers but with all new songs. Same style but more refined.

TCI: We’ve slowly entered Stage 3 of eased business restrictions since COVID-19, do you have any plans for getting back on stage yet?

BW: We actually do have plans! We just booked in a show for The Flamin’ Galah at the end of September, we’re just organising our supports at the moment. We’re excited to bring this new sound and show to the stage. For once we’re not trying too hard to be someone we’re not up there (we definitely stole a little bit too much from Manson), so it’s just gonna be pure us.

TCI: Which brisbane venues are your favourite to perform at, and which venues would you be most excited to perform at if/when given the chance?

BW: Crowbar are one of the only venues who have consistently supported us and let us play more than once so they’re definitely my favourite. The Zoo is also great and we actually made money from that one so that was sweet. I’d really love to play at an EDM venue like Birdees or The Met just to mess with the patrons. One minute it’s some techno drop next minute a bunch of goths in ripped stockings yelling down their throats. The dream.

TCI: You guys have some pretty protestive lyrics, such as your song ‘Our Sympathies for the Australian Christian’, which isn’t something you hear from many bands today. What are you hoping people take from your lyrics and are there any topics you’d like to write about in the future?

BW: Lyrically, I’ve always wanted to make people think about what it is they believe. It’s as much of a protest against stupidity as it is the fascism of religion and hypocrisy of morals seen in the media/politics etc. I target the governing bodies as well as the fuckwits that vote them in. There’s so much about traditional values and “the Aussie way of life” that I find ridiculous and conformist. I’ve been called un-Australian and told that I go against the Aussie way on so many occasions even though I was born here which I always find funny. It stems to growing up in a religious school as well and being hated there for being different too. I’m just a product of the world I was made in so if there’s something wrong with me, maybe there’s something wrong with them too. That’s what I’ve wanted my lyrics to reflect on. Reap the seeds that you sow.

I’m mostly about freedom of individuality. The shocking content and abrasive method I find is the best way to get attention to your message if what you have to say is offensive. And I think people should be offended by what I have to say. But, if you’re gonna be offended, you better think about why you’re offended.

BW: Our next goal is to finish off this EP and start playing gigs again ASAP. Other than September at The Flaming Galah, we’ve got nothing else planned, so it would be interesting to see how we go post-COVID.

Mr Rogers have also released some spooky new merch which you can buy too, or give it to your grandparents as a nice gift. Keep an ear out for their new EP, There Goes The Neighbourhood which will be released in September.

Catch them at The Flamin’ Galah in Brisbane on the 26th of September 2020. Keep up with Mr Rogers on Facebook, Instagram, Spotify and triple j Unearthed.