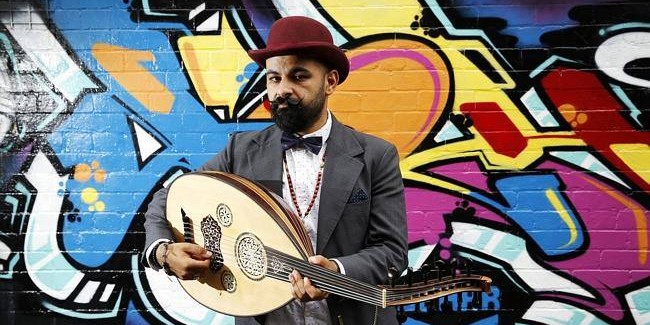 It might be surprising to hear that one of Australia’s leading musicians is oud (pronounced ud) player, Joseph Tawadros; every album madeÂ by Joseph Tawadros gets nominated forÂ an ARIA, his last two winningÂ it. His is an Australian migrant-success story. Â Egyptian-born, his parents fled Egypt to escape persecution of the Coptic Orthodox Christians. At the packed concert sits a man clothed in black cassockÂ and kamilavka, clothingÂ worn byÂ orthodox clergy. Â Along with everyone in myÂ row at the oud concert that took place on 1Â August 2015 at Sandgate Town Hall, no one really knowsÂ what an oud is. We spend the interval discussing what it most sounds like – though it sounds like nothing our ears are used to. 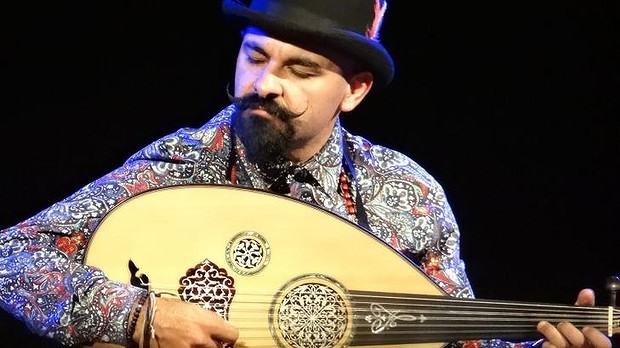 An oud is a 12 stringed ancestor of the lute with an ancient history rooted in Iraq,Â and an ability to produce a sound equal toÂ a band of guitars. It is shaped like a gourd split in half, and Joseph’s has the most stunning ribbed woodwork that glistens in the spotlight. Â The oud is played across the Middle East and in some songs Joseph has to retune his guitar to a different scale – what he calls an “Arabic scale” – that sounds odd to theÂ Western ear.

The complexity of playing a 12-stringed instrument with only five fingers to secure the strings is something Joseph makes light work of. Â Frenzied strumming in pieces such as Slight of Hand have the effect of leaving you breathless. Â Literally. The encore piece, Forbidden FruitÂ had me so strung up in the first quarter it wasn’t until the percussion kicked in and the piece relaxed I realised I’d been holding my breath.

The oud playing is entertainment alone but Joseph also has a talent for moustache-twirling – he sports an impressive one – and for story-telling. He introduces each piece with a comical story -Â  the punk band he played with who improvised their instruments usingÂ Â broom sticks for drum sticks, how he became ambassador to northern New South Wales town, Woodenbong, and about how he played this track with Christian McBride, Mike Stern and Matt McMahon (also an Australian Jazz pianist)Â and another with John Abercrombie – all New York City jazz legends. And then there was the time he met the chief of security in Lebanon who took him to play at the tomb of poet Kahil Gibran, the inspiration behind many of his pieces and one of his albums Truth Seekers, Lovers and Warriors. 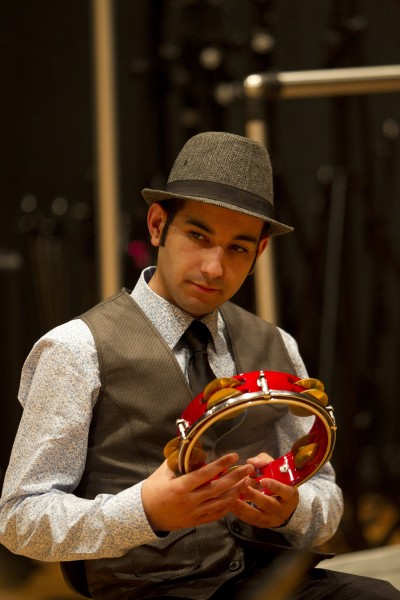 His brother James, sits in silence beside him for the entire concert – even when prompted by his brother who leaves the microphone on his knee, he says nothing and puts the microphone back in its holster. He rarely makes eye contact with the audience. Â He sitsÂ relaxed, one leg crossed overÂ the other, his energetic fingers appear to dance independently of him. When playing the tar, a large round drum like tambourine that has no cymbals, Joseph lets the entire instrument cover his head so that he appears to be playing the oud under the moon. Â During one track, Gare deÂ l’EstÂ – named after a Paris train station -, I felt that the riqqÂ the frenetic sound of the oud became the base to the riqq. Â But on the whole and apart from a short riqq solo, James does not compete with his brother’s charm or instruments, and raises his head only at the end to communicate thanks to the audience before bowing.

Without a doubt if there arises an opportunity to hear these musicians play live, it should be jumped at. Â This is an international Australian star that will continue to rise.

WhatÂ Music by the Sea

When First Saturday of every month