Privilege, diversity, stereotypes. Neel Kolhatkar takes the audience through a hilarious tour of societal issues. He sits down with The Creative Issue ahead of his headline comedy tour.

The Creative Issue: Youâ€™ve been a comedian since your youth. What drew you to performing?

Neel Kolhatkar: It began with a dare from my friends in primary school to audition for the school play, I received the main role and fell in love with it. I’ve always thought being the smallest kid at school drove me to seek out other ways to garner attention.

TCI: Your sketches and comedy often highlight social issues. Do you think it is important for comedians to call out society or do our massive failings just make for great material?

NK: I think most comedians tend to include their perspective of the world throughout their comedy despite some being more polished than others. It’s not always a conscious choice but the failings of society are a common thread for a lot of us.

TCI: Have you ever heard a joke and thought it went too far?

NK: I’ve heard jokes and thought they weren’t funny but I don’t think a joke can ever go too far in an absolute sense. In the sense of pushing the subject matter and audience to a point that’s needlessly disconcerting, a joke may be poorly structured but in terms of what is off-limits for subject matter or topic I don’t think a comedian can ever go too far. If anything the best comedy is that which deliberately breaches the line of what’s acceptable and finds the humour in said area.

TCI: Youâ€™ve been involved in international festivals including the Edinburgh Fringe Festival. Have those experiences had an impact on how you approached your own headline tour this year?

NK: Not particularly, I think the material and show itself would be the same regardless of whether I did the festivals. The only impact would be the cities I travel to, with festival cities having already been covered.

TCI: Your Millennium Child show approached the issue of the lack of diverse role models. Is this a topic in your current tour?

NK: Yes, I do cover the topic and take it to a substantially more challenging place in this show, as with a lot of my material.

TCI: Your short films Modern Educayshun and The Privilege Game showcase the challenges of navigating privilege. Do you think weâ€™ve made any progress in this area?

NK: Thinking long-term we have made progress, but in recent history the pendulum has swung the other way regarding our discourse around the topic and people are either pushing highly reactionary views or stifling opposing viewpoints so there’s progress still to be had. 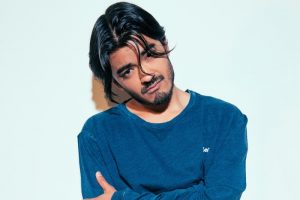 TCI: How do you think youâ€™ve changed your approach to stand-up over the years?

NK: My stand-up has definitely become bawdier and darker over the last couple of years, I rely less on the act-outs and characters and use other methods of analogy or misdirection to create a punchline, while still dispersing a couple of the former skills throughout the show. I have become far more comfortable and confident on stage and am less afraid to push the audience past the point of comfort to highlight a point.

NK: An audience that doesn’t know me, and a small one. Many of the little comedy bars around Sydney tend to be my usual stomping ground.

TCI: Whatâ€™s your next move?

NK: To continue on the path I am on and grow my audience and material. Also to build a profile within traditional media and work towards that simultaneously with the internet profile.

The Kite String Tangle on His New Album and Touring