Charming foursome Millions are preparing to return to the stages of Brisbane and afar with the impending release of their new single â€œClementineâ€ and debut albumÂ Max Relax.

With a stellar run of live shows in 2013 including support slots for San Cisco, Brissie pals The Jungle Giants, British indie group Peace, and even Babyshambles, Millions have taken a break from gigging since to focus on the creation and recording of Max Relax.Â

â€œClementineâ€ (released on the 20th) Â is a more polished sound than has been heard from Millions in the past, though it retains the elements of frontman Dominic Haddadâ€™s classic, croony vocals and catchy surf-guitar hooks provided by Ted Tilbrook. Lyrically, itâ€™s extremely relatable and reflects the youth and overall vibes that the group possesses. 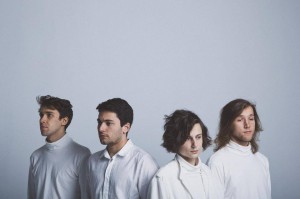 Millions are back on Brisbane’s live scene

ForÂ Max Relax, after jet-setting to England towards the end of 2013, the boys spent six weeks devising and recording, with input from guitarist Ted and drummer Louis’ father Glenn Tilbrook, who operates 45RPM Studios in Greenwich. The polished balance heard on “Clementine” (and no doubt the whole album) can be attributed to mastering completed byÂ Andrei EreminÂ in Melbourne.

Though a headline album tour is yet to be announced, itâ€™s undoubtedly on the horizon, with Millions crashing back into the Brissie gig scene as support on local favourites Ball Park Musicâ€™s Trippinâ€™ The Light Fantastic tour, hitting major cities plus some out of town destinations like Geelong, Bendigo and Margaret River.

You can get groovy with Millions and Ball Park Music on the 18th of October at The Tivoli, or at Alhambra Lounge on the 2nd of November if youâ€™re not of voting age.