I got to speak to the lovely Grace Cuell while she was traipsing through Fortitude Valley, a couple of days after she and her band had hit the stage for BIGSOUND 2018. We talked about Nice Biscuit’s latest shows, their new record, which comes out this Friday the 14th September, and their incredible, quirky DIY costumes.

The Creative Issue: What are you up to in the Valley tonight?

TCI: How did your show on Tuesday go?

G: It was so good! It was really fun. It was really well-received and we managed to get the boys to wear costumes! It was probably one of our favourite shows, I would say. There was a few technical difficulties – just your classic BIGSOUND with their quick changes, but apart from that, it was really good.

TCI: I mean, props to them, they manage to fit so many bands into such a short time.

G: Yeah, it would be an absolute headache to do it that well, so they do a great job.

TCI: How has your year been so far in general? It seems like you’ve been touring non-stop, festivals, your own shows, supporting other bands. How’s the tour life suiting you?

G: It’s pretty weird like – don’t get me wrong – I really enjoy it, but I’m also a massive homebody, so everyone in the band bags me out because I’m in bed at 8 o’clock. But it’s been such an incredible journey. The shows that we’ve played in the last twelve months are things that I never would have thought would have ever happened, so it’s been really nice and just super fun.

I didn’t sing in front of anyone until I was 23, and I’m 26 now, so it’s been a long dream of mine to perform. I think same for everyone else in the band – they just love music that much and we’ve always wanted to have some sort of go at it – it’s been really surreal!

TCI: You’ve managed to put music out even though you’ve been travelling all over the place, how do you fit that in? Do you prefer being at home and recording?

G: We’re very much a live band. We’re not the kind of band that sits around and records, we write music to perform it live. I guess the recordings just came after that, and playing shows solidly for two years, we’ve just kind of been like, we’re really ready to put our album together, we’ve finally refined our sound, because it’s taken quite a different turn to what we started out as, which is good! [laughs]

The recording kind of came from wanting to be able to capture what our live shows were about and put in on a record for our fans – well, mainly for our friends and family, to be honest, they make up most of our fanbase.

TCI: Rather than a shitty phone recording ‘cause your mum’s been in the back filming it on her phone… 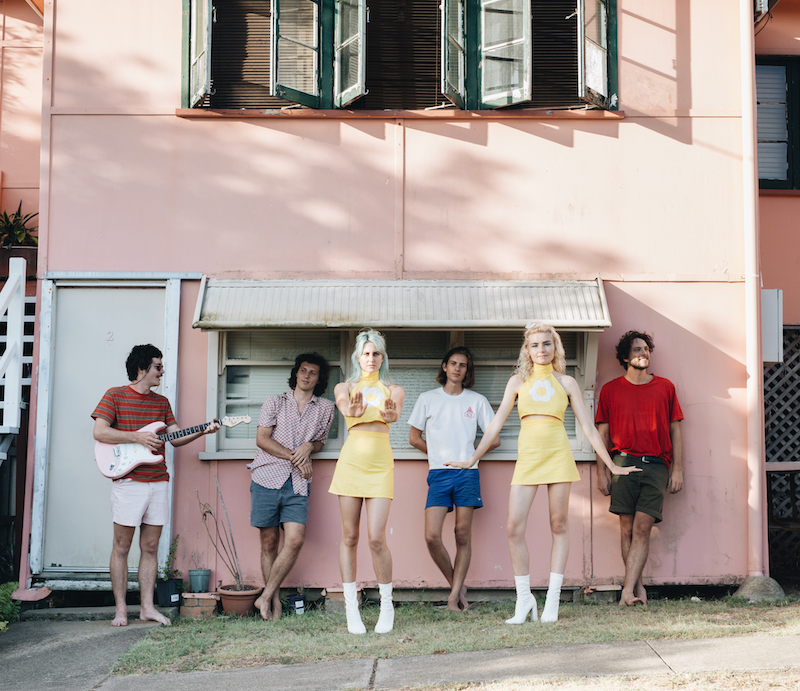 TCI: I also wanted to talk to you about your incredible costumes. I got to catch you at the Mountain Goat Valley Crawl earlier this year and you and Billie just looked incredible. Then I found out that you’d made the costumes yourself. And – tell me if this is true or not – you do different costumes for every show that you do, as well?

G: I’ll give you the backstory: We had our first show in Mullumbimby at Billie’s mum’s property. That’s when we were like, we’ve been jamming, let’s play a set. It was a frock-themed party, so everyone had to wear a dress, and Billie and I happened to have matching dresses, so we were like “oooh let’s match” and then Ben, our guitarist was like “you guys have to match every show” and we took it very literally. Billie and I both have a sewing background; I sewed all through high school and so did Bill. We both wanted to have platform to do that kind of wacky costume designing for a long time, so we just thought, why not make it a thing. Like secretly – no, I probably shouldn’t say that – I was gonna say I like it more than the music but it’s like an equal love for us.

TCI: You can definitely have both!

G: Yeah! We went through a phase where we were making really cooked outfits that we probably wouldn’t wear on a normal day, which is great; it’s great having a wardrobe with velvet, sequinned jumpsuits but we started making stuff that we can just wear.

TCI: Would you ever create your own fashion label?

G: Yeah – our aim in the next year or so is to start making costumes for other bands. That’s where we’re headed. We’re really passionate about it. I love seeing bands that make the effort to do costumes and stage decorations. It just adds that visual aspect to a sonic show. When you combine the sonic and the visual, it’s such a beautiful thing.

TCI: You can listen to a band’s record any time, but when you see them live, it’s about the whole performance.

TCI: Do you have any particular fashion icons that you draw inspiration from?

G: We both are really mesmerised by one particular video of Grace Jones performing a set. She’s wearing this epic costume, and while she’s singing, she’s hula-hooping on stage. I mean, that kind of thing is so inspiring.

Also any 70s disco: we’re very much inspired by anything vintage. Any thing from the 60s, 70s and even 80s! Diana Ross – she’s pretty cool too.

TCI: And it fits with your music so well; you’ve got that psychedelic, progressive rock sound going, which is very on theme.

If you’d like to see them in the flesh, Nice Biscuit are playing shows around the country supporting their new album, Digital Mountain.

THE DETAILS:
What: Nice Biscuit Digital Mountain Album Tour
Where: The Zoo, Fortitude Valley, Brisbane
When: 21st September
How Much: $12.25 including booking fees
Facebook event: here

Jaguar Jonze Talks You Got Left Behind

Winning Couple: An Evening with Bob Carr and Germaine Greer