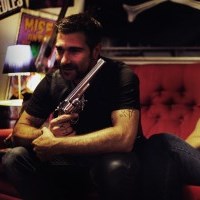 Recently I got the chance to talk with local film producer, Melanie Poole. Sheâ€™s just wrapped up filming on her latest project, Nice Package.

So youâ€™ve just finished filming â€œNice Packageâ€, can you tell us a bit about it?

â€œNice Packageâ€ is all about entertaining the audience. Itâ€™s a gangster comedy and itâ€™s about a wannabe professional thief, his gay best friend, a sexy hostage, a bunch of thugs and a package, a mysterious package everyone wants. Each of the characters I think the audience will love, theyâ€™ve all got their own stories. Â We were aiming to create something that kept the audience captivated and entertained. Itâ€™s got the comedy aspect and we felt that there werenâ€™t a lot of films being made of that genre in Australia at the moment. Weâ€™ve sort-of come through a period where a lot of the films are based on quite serious dramas and have morbid themes. Which are great films, but we felt that we could make something that made people laugh, made them feel good, and keep them captivated. Itâ€™s got a bit of a Coen brothers, sort-of Tarantino sort feel to it. [The film] has heaps of fantastic music, weâ€™re working with local musicians. We are also going to use a few old Australian hits from the 60s and 70s. When we shot it we deliberately left those spaces so that we could have great music throughout the film.

What is your favourite thing about making a film?

I think itâ€™s just that chance to entertain an audience, to create something that is collaborative, and to work with so many amazing artists. Our crew and our cast are all such talented people, to be able to bring them altogether and use their specific talents to make something that is great. A film is not something you can do by yourself, thatâ€™s for sure!Â  Itâ€™s so amazing to get those people together and create that something thatâ€™s really going to entertain an audience and also leave a lasting legacy. Itâ€™s beyond a life-long legacy, a film is something that can be around forever, so thatâ€™s the fantastic thing.

How did you get into the film industry? Was it always something you wanted to do?

Yeah itâ€™s something that Iâ€™ve always worked towards. I started out as a journalist, but I really wanted to do film and television. So I did a lot of my electives in film and television. I ended up working as a producer and reporter for the Today show on channel 9. But I knew from a young age I wanted to pursue my own projects, so I started my own production company at the age of 25. Since then Iâ€™ve been working towards making short films, and won a couple of awards for short films. Always working towards the dream, which was to create and produce a feature film.

How do you find the film environment in Brisbane?

I come from Queensland and Iâ€™ve based my company here. You canâ€™t lie, itâ€™s not exactly a booming industry in Queensland. I think itâ€™s more reflective of our population though. In countries like India and Brazil, theyâ€™re going to sustain hundreds of feature films a year, because theyâ€™ve got that population. In terms of the passion, the ideas and the skills, they are as ripe in Brisbane as anywhere in the world. Hopefully we are heading to a new era where film production is a lot more accessible.

Do you have any advice for those hoping to get into the film industry?

My motto has always been, imagine what you would do if you couldnâ€™t fail. Why not? Just go and do it. Nothing is stopping you, particularly these days. Just get out there and do it basically, you may not be an overnight hit [laughs]. But in terms of getting up your credits and all the things you need to achieve funding and get to that next stage, thereâ€™s nothing getting in the way of entering film. As long as you have a really great script, idea and can get together some talented actors and crew. It is something that it much more achievable these days.

Weâ€™ll have our final master edit completed by June. Itâ€™s pretty quick because weâ€™ve had someone assembly editing it the whole time. Weâ€™re hoping to sell [Nice Package] internationally by the end of the year and/or enter some of the larger international festivals.

Do you have any more pieces coming up? Whatâ€™s next?

We’ve got a whole line of concepts and a couple of completed scripts, weâ€™re ready to go. We always knew that once we started that we didnâ€™t want to sit back and wait for another two years to get funding for another one. Weâ€™re hoping to make another one by the end of the year.

To learn more about Nice Package, go to their Facebook page here