With summer in full swing, the last thing anyone feels like drinking is a hot coffee. Fear not coffee lovers, there’s a new brew in town! Enter Nitrobev Creamflow coffee, the cold brewed coffee option poured straight from a beer tap using the same nitrogen gas technology as Guinness beer. 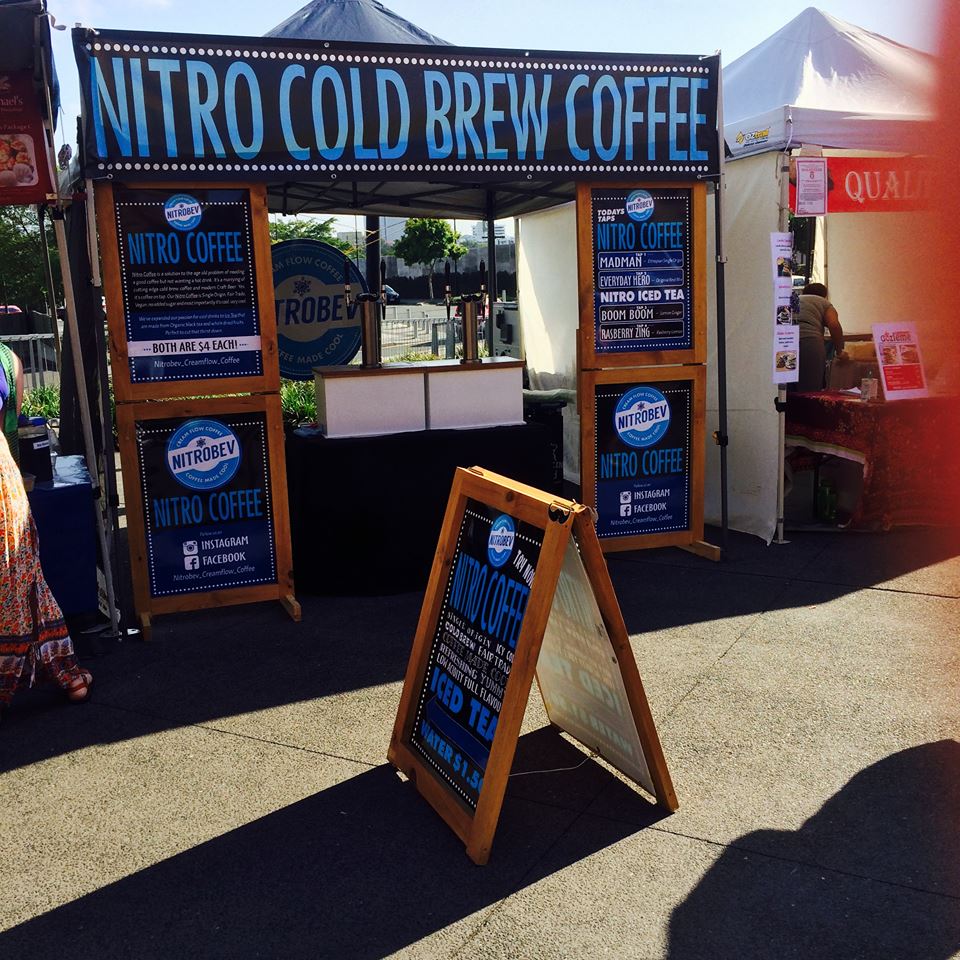 “I just thought, I don’t think it’s going to work straight away, I don’t think there’s a market for it, but it’s very cool, let’s try it in the market stall… I said to Brad, “Hey man, what do you think of this?” and we were both convinced there was life in producing a really high quality cold coffee option, so we went for it,” he said.

Previously coming from the health field, Ben says he was very driven to produce a high quality product.

“Most people we know drink Ice Break and that’s their cold coffee option and that’s terrible- really low quality milk, lots of sugar and a lot of people I know who drink that for long periods of time end up with digestive issues.”

The trend to infuse drinks with nitrogen gas first took off in the craft beer world in Oregon, USA and quickly evolved to infusing coffee – a move so successful there’s even talk of Starbucks launching nitrogen coffee on their menus. 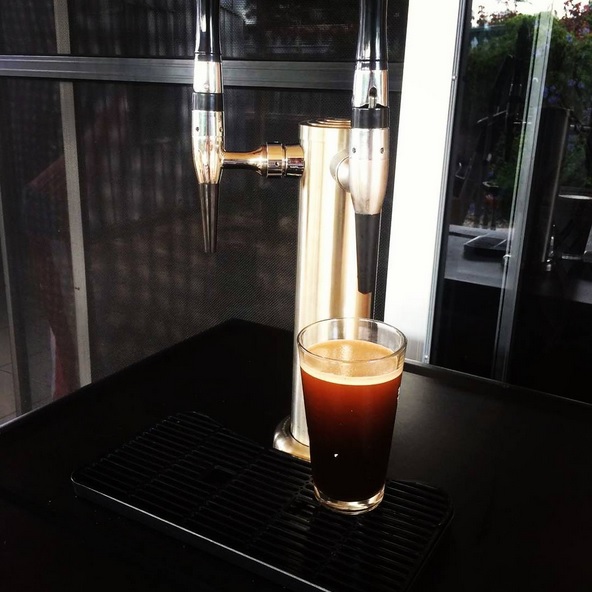 With no instruction manual, the boys had to start from scratch using their knowledge of beer brewing equipment (and basic trial and error) to perfect their method.

“The basic method most companies use is you make cold brewed coffee, that’s where you grind the beans you want and you cold brew it for about eight hours until you get the final product that you want. It comes out very low in acid, very smooth, still very rich but not nearly as bitter as hot brewed coffee.

“We then take it out and pump nitrogen gas into the vessel at very high pressures and then you have to let it infuse. Within a keg, we can’t put the pressures in it that I’d really like to.

“Then there’s another method that we’ve started using more recently that has an expensive nitrogen injection situation going on, under incredibly high pressure. It’s nothing you can do in a backyard set up, you need a brewery set up to do it but it’s really fast, its ten times the pressure and puts the liquid under ten times the amount of pressure with nitrogen,” Ben said. 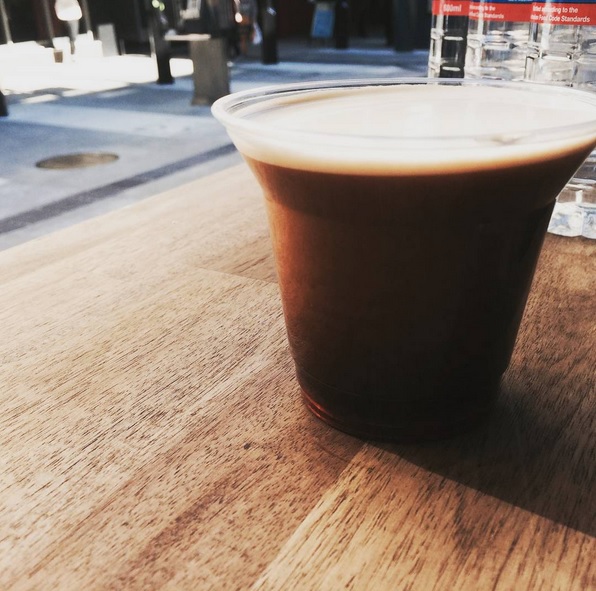 “What we’ve found from trying a few different gas mixes is that the nitrogen gas adds to the texture on your palette once it’s in there, allowing a bit more air and a bit more surface area literally on top of your taste buds.

“Then, as its trying to escape back into the atmosphere, because the atmosphere is about 70% nitrogen, it’s trying to escape back out it actually gets caught in the crema and the crema makes it have that white head, which acts like a milky sort of situation because they’re very fine bubbles as opposed to carbon dioxide. So your palette actually doesn’t pick up much difference between milk and the nitrogen gas crema.”

And as for the response from die hard coffee lovers?

“Everyone seems to love it, the response has been great from coffee drinkers,” he said.

“Coffee drinkers and craft beer kids are already primed for the complexities of single origin coffee and the beer guys, they understand nitrogen and how cool it is in beer, and how cool it potentially can be with coffee. I reckon we get about 75 – 80% of people go “Oh wow, that’s great,” because it’s not what they expect.”

Not a fan of coffee? No problem – Nitrobev Creamflow Coffee have catered for all taste buds with a range of iced teas on their menu including the Raspberry Zing iced tea with a strawberries and cream flavour, as well as a lime and ginger iced tea. 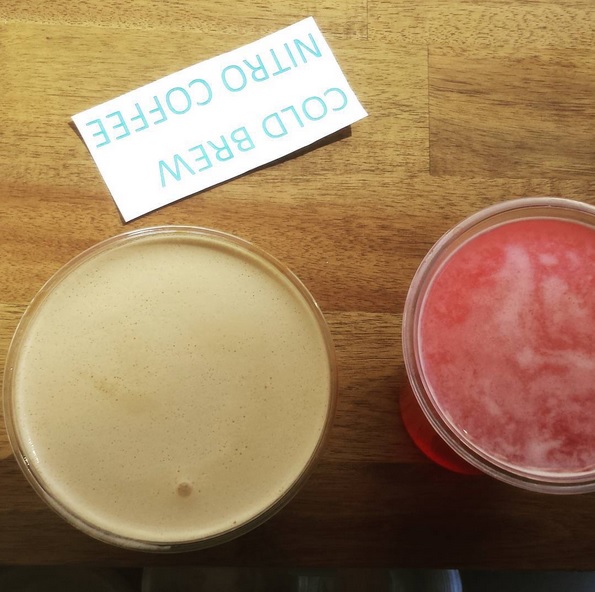 Cocktail lovers and health nuts alike will be pleased to hear the boys are currently working on a cocktail mix and are also looking at introducing a range of traditional medicinal teas to their menu. They’ve also just announced Take Home Nitro Coffee will soon be available, launching in February.

“We’re not bound to anything- coffee world, beer world, tea world, we don’t have any rules except that it can get stuffed in a keg and can be infused with nitrogen!”

WhereÂ Catch the guys at Boundary Street Markets or if you’re just after their coffee, Hop Scotch and Beans, Bao Down Now and Not Tonight bar keep Nitrobev coffee on tap.

Morbid Things You Canâ€™t Un-Know: A Review of Caitlin Doughty’s ‘Smoke Gets in Your Eyes…’