Brit comedy’s favourite surrealist Noel Fielding is coming to Australia at long last – if you’ve been a fan since the beginning, it’s time to dust off your mirror-ball suit and your feathered mullet, as this won’t be a show to miss.

His tour An Evening With Noel Fielding will come to Brisbane for two nights in April 2015, playing the Concert Hall at QPAC, and will feature original music, (written with Kasabian guitarist Serge Pizzorno) and a host of his best-known characters. 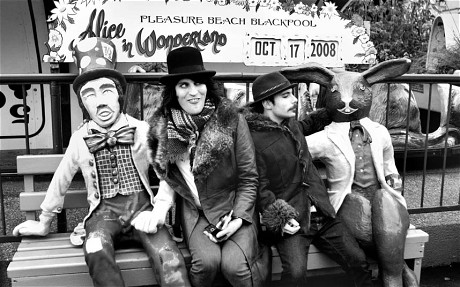 Noel and his brother Mike

It’s odd given that The Mighty Boosh had a big start at the Melbourne International Comedy Festival all the way back in 2010, premiering their show Autoboosh and featuring their full cast for the first time, that the Boosh never chose to tour Australia since then, though Fielding did make a brief appearance in 2012, with Brisbane typically missing out. Fans of the Boosh shouldn’t hold their breath for a reunion, we’ve been told, though Noel’s brother Mike will be in attendance, whose quiet under-acting in the role of stoner shaman “Naboo the Enigma” was a Boosh fan favourite.

Fielding is an impish, irreverent presence on screen and on stage, often featuring his own artwork in sets and in costumes to give the impression of having summoned up his own universe. Since the Boosh, Fielding has gone on to become a regular on British screens, regularly befuddling fellow contestants on panel shows with his quaint, nonsensical answers and occasionally teaming up with fellow big-haired comedian Russell Brand to form the “Goth Detectives” and hosting his own absurdist program Noel Fielding’s Luxury Comedy.

What Noel Fielding announces Australian tour, alongside his brother Mike