The animated and delightfully strange, Unusualist Raymond Crowe, from The Illusionists 2.0, is a born legend in the mysterious realm of magic and artistry.

The Australian, who has the most creative profession, said he coined the title â€˜The Unusualistâ€™ after those around him continually described his line of work in one word, â€˜unusual.â€™

However, this fine magician has not always been the overly confident character we see on stage today.

For Crowe, magic, puppetry and ventriloquism meant more to him as a child than most. It was a way for a timid boy to come out of his shell.

â€œMagic attracts people for many reasons,â€ Crowe began to open up.

â€œI was a shy boy and magic gave me something that allowed me to communicate easier with people. Also, I did like the challenge that sleight of hand gave, learning from old books.â€

This sparked an interest in Crowe that has stayed with him ever since. At the time, the young and innocent boy had no idea that a simple way to build confidence would turn him into one of Australiaâ€™s rising star years later.

Despite Croweâ€™s enthusiasm for the magical combination of illusion and wit, it has not been an easy task, turning his wild and wonderful passion into bread and butter.

It was not until he was eighteen when Crowe began training with the Australian Mime Theatre. He learnt under the enchanting hand of the late Madame Zora Semberova, who lived to teach magic and performing arts until she was ninety-nine.

â€œI owe at lot of debt to her for giving me a formal discipline,â€ Crowe said gratefully.

Semberova has been the most influential person to Crowe in both his youth and in his life. Here, he learnt discipline and perfection, as this â€œamazing womanâ€ would â€œsettle for nothing less than the best.â€

More than a few idols have worked their way under Croweâ€™s magic thumb.

One of which includes South Australian Gene Raymond, the first magician he ever met.

â€œHe always encouraged me, but believed you had to seek the information out for yourself.â€ stated Crowe. The face-to-face experience has played an important part in his life ever since.

Crowe has since played his hand at an assortment of unique performances on and off the stage. Yet it has not always been through mainstream routes.

An opportunity arose for Crowe after his hand shadow routine to Armstrongâ€™s version of ‘What a Wonderful World’ became a viral video. He was then able to travel and form his one-man show.

Crowe said, â€œThe shadows are the closest I have found to real magic â€“ and there is no trick! It all happens in the mind of the viewer.â€

This act has been one of the most exciting moments for Crowe.

â€œWhen the world opened up due to my simple hand shadow routine, that was a big moment.â€ As his mime teacher had always told him, â€œbe human and you can work anywhere.â€

However, that shy boy inside him still appears at times.

â€œThe scariest thing I have ever done was to appear as a contestant on Australiaâ€™s Got Talent,â€ revealed Crowe.

â€œOver the years I have had fun combining the different forms,â€ said the quirky all rounder. â€œI guess thatâ€™s what gives my work a unique quality.â€

It is moments like these that have enabled Crowe to land a dream job with The Illusionists 2.0, which is currently on show at the Queensland Performing Arts Centre (QPAC).

Loved amongst all Australians, Crowe has spent the new year touring with like-minded international performers to create a show of brilliant mental and optical illusion. 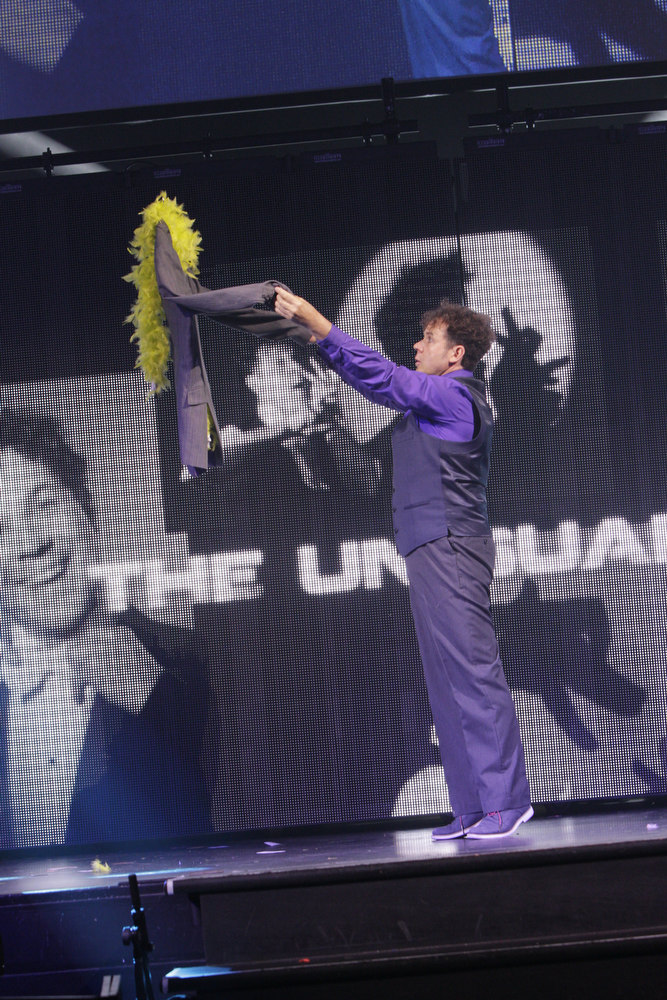 As someone who typically performs as a solo act, it has been an eye opening experience.

â€œNormally I am the only performer so it has been interesting having to follow another act and change the mood from their performance into your own world,â€ stated Crowe.

â€œTo be with others who speak the same language of wonder is a delight,â€ he went on to say.Â â€œWe are all so different, performing magic is like a singer singing a song, each person should bring their view point to the song.â€

For Crowe, he contributed a brilliant act as he gathered random audience members and brought them to the stage.

Crowe successfully reached a personal level. As a show stealing art form in itself, he gained Aussie â€˜mateshipâ€™ with the audience and sounded the vocal chords as the crowd roared in laughter.

It is times like this that Crowe loves the most. He described his moments with the audience as the most interesting part of his career.

“It sounds corny,â€ he blushed, â€œbut illusion is a performing art to me and the older I get, the more I realise what a privilege it is to have people stop and watch what you do.â€

Not only has Crowe been tugging at the heartstrings of the audience with his puppetry, the crowd has been pulling on his.

â€œWe can see people from five years old up to ninety years old and they are all smiling,â€ Crowe said admiringly. â€œI donâ€™t know of any other form of entertainment that can be so all encompassing.â€

Despite being in the finale of their Australian tour, The Illusionists 2.0 may be commencing a new tour across additional countries in late 2014.

â€œIt could see me with it again,â€ Crowe said with his fingers crossed that the dates match up.

However, there is no doubt that Crowe will continue to share his talents with Australia.

While a rumor of a television special has been floating around, Crowe is currently planning his up and coming one-man show.

â€œI hear it may be coming to Brisbane in the next few months.â€ Crowe let the secret slip.

With an element of mystery about him, The Unusualist is set to make Australia laugh as he continues to delight the young to the elderly with his strange and wonderful magic.