The Brisbane French Festival is coming to you!

Held on the weekend before July 14, which marks Bastille Day, the French Festival is sure to appeal to all Brisbanites, regardless of their knowledge of France.

â€œWhat weâ€™re really trying to do is share our passion for France with Brisbane. Australians know France really wellâ€¦ some have been there on holidays or lived there or studied there and itâ€™s a way for them to remember those things when they were travelling or remember what France is like,â€ said Betty Moinet, the Festival Committee president.

â€œItâ€™s all about sharing passions and moments to remember together.â€

Imagine yourself on the banks of the Seine as you peruse the market stalls dedicated to showcasing these passions of French culture. Homewares, fashion and food will be some of the main attractions of the stalls with something for everyone.

â€œWe have probably about half of the stalls offering French food. Either itâ€™s things to try on the day like macaron or canelÃ© from Bordeaux, thereâ€™s lots of different foods that people can try and buy as well as traditional meals that are already cooked that people will be able to take home,â€ Betty explained. 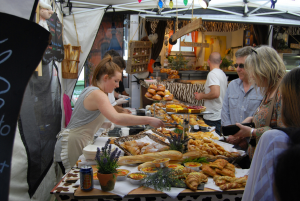 Enjoy some delicious French cuisine at the Brisbane French Festival.

If you prefer something savoury, then a journey through the wine pavilion is for you, which will offer cheese and charcuterie platters alongside the wine tasting.

Thibaut Guigues, the organiser of the Wine Pavilion, described the wine pavilion as â€œbasically a wine tour of France in Brisbane in a fast-tracked way.â€

â€œThe way the pavilion will work is it will be open to the people. Anyone can walk around, talk to the exhibitors and discover a few different facts about each region,â€ he said.

â€œWeâ€™ll have a package that will be available for $10 that will include a glass with the Brisbane French Festival logo on it and three tickets, which will give you access to three tastings.â€

Enjoy a Merlot from Bordeaux, a Riesling from Alsace, a Sauvignon Blanc from the Loire or a Pinot Noir from Burgundy at the Wine Pavilion.

The pavilion will be organised geographically and will explore 10 of the major regions in France. The bigger regions such as Alsace and Val de Loire will be showcased and champagne lovers need not worry, as the Champagne region will be represented by Canard-DuchÃªne. With each region represented by a separate importer and signage explaining the wine and the map of France, this experience is sure to be both enjoyable and educational.

Betty is almost as excited as Thibaut about the wine pavilion.

â€œItâ€™s something thatâ€™s been missing in the past few editions of the Festival,â€ she said.

â€œThis year the wine pavilion is the definite highlight and itâ€™s going to be quite attractive.â€

Another highlight of the day that Betty is eager to discuss is the Plave Fashion Parade that will be held on board the Kookaburra Queen. 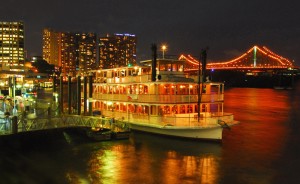 â€œThe concept is different from past years. In our community a lady, who is a model, decided that this year she didnâ€™t want to be on stage, she wanted to be organising,â€ Betty explained.

â€œSheâ€™s been working with Australian creatives to find out how they would portray the Parisian woman.

â€œSo you leave the Brisbane French Festival, then you go on this boat trip, enjoy a glass of champagne, have a few things to eat and enjoy the fashion parade for an hour.â€

The hair and the makeup for the fashion parade will be done by La Biosthetique who will also host a refreshment bar on the Kookaburra Queen where guests can have their makeup refreshed by professionals.

Betty described another fun, interactive element to the fashion parade.

â€œWe have a fashion designer who works for Vogue Nationale who will pick a woman and try to relook her the French way,â€ she said.

â€œSo she will give her a lot of eyeliner, a scarf and a beret and try to relook that person in 10 minutesâ€¦ essentiallyÂ make her look like a classic French woman.

It is these engaging, entertaining ideas that will make the Brisbane French Festival so enjoyable. The passion of the organisers, stallholders and volunteers is evident in the detailed preparation of every element that aims to celebrate their love of France, French culture and Bastille Day in particular.

â€œBastille Day is a very important moment in the history of France and the whole world,â€ Betty explained.

â€œItâ€™s the beginning of human rights all over the world.â€

â€œAll the liberty and all the things we fought for in that time is still reflected today, itâ€™s still a big moment and thatâ€™s why we chose that weekend because itâ€™s such a big moment in our history, to make all human rights the same.â€

The historic element will be represented through the dignitary honour guards and drummers of La Belle Alliance. The live entertainment will also include jazz bands, can-can dancers and French mimes. 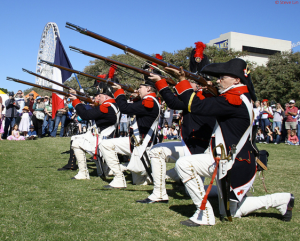 The children will be entertained with the Kids Corner, which will have a huge black and white fresco of Paris for the children to colour in together as a common work alongside live entertainment.

So come Saturday, July 12th and Sunday, July 13thÂ to the Southbank Parklands.

â€œHave a look around at the stalls at the market then jump on the boatâ€™s fashion parade and as you come off the boat definitely go to the bar and spend a bit of quality time with the wines and then go for lunch and then you can go back for a platter of cheese whilst listening to the entertainment.â€ Betty advises.

â€œThereâ€™s something for everyone, whether you come by yourself, as a couple or as a family, during the day or during the night, thereâ€™s going to be something happening all the time.”

Cost:Â $5 entry and free entry for children under 12 years of age

Le Noir – The Dark Side of Cirque Coming to Australia