With music by Paul Dean and libretto by Rodney Hall, Saturday 01 September saw the world premiere of Dry River Run in Brisbane.

Queensland Conservatorium’s Dry River Run is a dramatic tale set in a remote Western Australian town against the background of the federation. With the death of popular local figure, Archie Callaway, his brother, the Reverend Callaway, played by Oliver Boyd, arrives in town to claim a half share in his deceased brother’s property, Dry River Run. The opera’s plot centre’s on Archie’s widow and daughter, Gladys and Veronica Callaway, Xenia Puskarz Thomas and Sheridan Hughes, and revolves around themes of death, inheritance, domestic violence, and tragedy, which are all explored through music and sung lines. 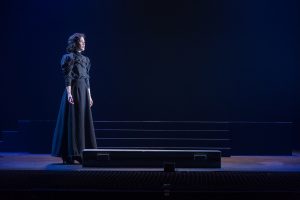 The first act opens with Archie Callaway’s funeral and the arrival of Reverend Callaway. The opening was chilling for the haunting music, exaggerated by Thomas’s and Hughes’s equally affecting voices. The cast was strong in their performance; however, I was increasingly unmoved during the first act as the music and song seemed to lack disparity. Equally, I felt a majority of the plot progression occurred in the second act, so only the first ten minutes and the last fifteen of the first act felt relevant to moving the story forward.

The set was simple, encircling a small raised platform in the centre of the stage, and the cast would move tables, staircases, and buildings, on and off stage as required. The way the cast moved the set was particularly interesting. I found myself distracted from the performance by their methodical and exaggerated paced steps. The hued lighting complimented the minimalistic set, with a dusty orange-yellow glow illuminating the performance. I found the lighting incredibly effective in portraying a rural Australian town with dust and golden dirt swirling around the buildings and skimming along the roads. 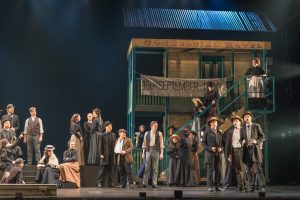 Dry River Run showcases a nation’s struggle to understand their new independence and a family’s struggle to come to terms with their deepest secrets. This is a work that evokes the rural beauty and frustrations of a small Australian town and the lives of its inhabitants during federation. Dry River Run is a view into the past, an imagining of rural Australia in 1900.