We had the chance to catch Orpheus at Brisbane Festival Wednesday night. Here’s what we thought.

The tale of Orpheus:

In ancient Greek Mythology Orpheus was a musician, poet, and prophet. His parents were the king of Thrace Oeagrus and the muse Calliope. Orpheus was considered the best musician and poet of all and perfected the lyre. His music, able to charm animals and make trees dance, and his voice more beautiful than any Siren. His love for his wife, Eurydice, was everlasting.

The Tale of Dave:

The modern retelling of Orpheus follows Dave, single and turning 30. Once a musical child who started in a world where he would hum his tunes and play guitar, only to lose his love for music and his sight for colour in the world. Until of course, he spies his Eurydice in the middle of a darkened bar with patrons singing Bruce Springsteen’s “Dancing in the Dark”.  Here, the colour that was once gone from his life, comes back in the form of his love for Eurydice. 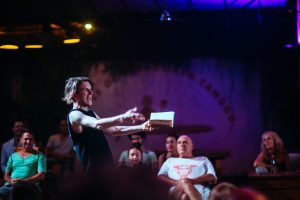 While in different times, both tell the same story of Orpheus and his tale of death-defying love for his wife and his mission to Hades to get Eurydice back after her sudden death. Both versions were still sad and tear-inducing with a bittersweet ending.

This internationally award-winning retelling of this ancient myth is currently showing at the La Boit Theatre until the 21st September. Written by Alexander Wright and Performed by musical artists, Tom Figgins & Phil Grangier.

Tom Figgins’s raw, powerful, and emotional reading is complemented by the amazing musical talent of Phil Grainger, who has covered hits by the likes of the Jackson Five, Bruce Springsteen, and Whitney Houston, as well as performing original poetry. 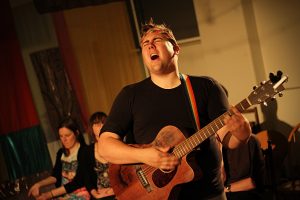 Looking from one performer to the other. Going from story to song until hearts broke at the end of the play with a few sniffles and tears in the room. Orpheus and this modern retelling is a must-see show for anyone.

THE DETAILS:
What: Orpheus
Where: Theatre Republic
When: September 17 – 21 2019
How Much: Tickets from $20-35
More Info: Visit the Brisbane Festival website here