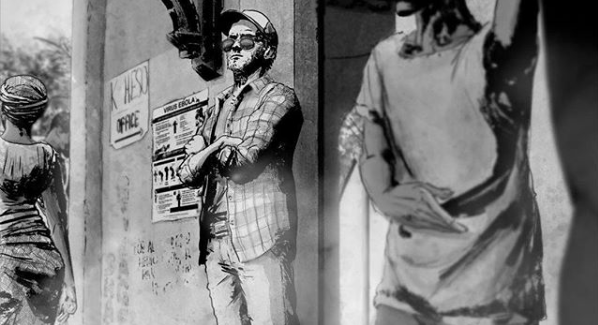 Part of Oz Comic Con’s guest line-up is a variety of local comic artists and illustrators. It was great to hear from Tristan Jones (moniker T-Rex), who has written for works such as Teenage Mutant Ninja Turtles and illustrated for Aliens.
TCI: Can you explain what type of artist you are?

Tristan Jones: I never really feel comfortable calling myself an artist because that implies some kind of higher level of, I don’t know. It’s not necessarily creative thinking but it’s an artistic thinking. Kind of what I do is, not to take away from the artistic integrity of illustrators, but I do think of myself more as an illustrator than an artist. It probably has more to do with my own professional output – creative output – than anything else. Any kind of artistic movement or influence or style; it’s kind of more just a direct illustrative thing. Kind of what my eye sees, day to day, is what I try to get across in what I draw. Obviously barring things like Aliens and that sort of stuff, where you do have to come with things. There is some kind of artistic license there. But, you’re given something like that; I try to make it look as much as what you can already kind of see in the existing media.

TCI: What kind of projects are you working on at the moment

TJ: That’s a question I knew I’d get asked, and it’s not one I can sort of directly answer. I can say that I’m working on three things for two major publishers right now. Two of which I’ve worked on before, which I think people who read this and know my stuff will probably do that math and figure out what it is. I think they will be excited by that. I know I’m excited by it. Beyond that, I’ve been – I kind of took steps away from the industry itself, because I didn’t sort of like the direction it was going in. Now I’m doing my own thing. They’ve kind of picked up movement and interests from various publishers but also various other media platforms. So they’re moving along directions I wasn’t expecting them to, before they even had a chance to move forward as a book. Which makes the creative process interesting, so I’ve got to think about so many other different things other than just telling the story as I see it. So a couple of licensed proprieties, and a couple of things of my own.

#Pencilling and mapping in the #shadows for my next #commission #piece on my old @Wacom 21UX Cintiq. #art #drawing #digitalart #digital

TCI: I saw you were a writer as well. Other than the obvious difference, what would you say the differences are between the two regarding storytelling?

TJ: I haven’t written for a very long time. I got into it through writing. It’s something I kind of wish all writers did. I understand not all writers can, that’s why they don’t. I’m sure if all writers could then the industry would be a very different landscape. The books would be very different. There’s not a lot of writers who draw, or a lot of artists or illustrators who write. I’m fortunate to think that I can do both.

It’s kind of interesting because I’ve had to kind of reword how I write, or how I write comic strips, because it’s been so long since I have. The biggest thing though, a sort of stumbling block, when I was writing just as a writer, was being aware of the illustrator. See, I kind of go crazy with what I picture in my head, because I don’t have to draw it. That allows me to be a bit more sort of free with what I’m doing. But now that I’m kind of on the other side of the fence, it’s interesting. Because, when I’m writing a script now, there’s barely any writing.

An editor that I’m working with not long ago, he worked with a tonne of other writer/artists and what he would tell them is don’t write scripts; have a treatment or an outline for it or something. But then, just go straight into drawing it. The story will be a better visual narrative. Sometimes when you’re just sitting there writing the script without drawing it, the mindset is very different.

Storytelling is not so different as far as how I see it all. It’s interesting too because as an illustrator who knows how to write, I’ve sat down and looked through a script by good writers – writers who have much more experience in the industry than I have – and still gone back to them and was all “hey, you know, these panels, you don’t need these, we can condense all this into one thing.” Done as a polite suggestion, and they just “that’s great, do that.” But it is interesting, in that regard.

TCI: What got you interested in the first place?

TJ: I was hesitant, I think. Kind of like most people who get into this. It never really had me interested. I was doing Film and Television for uni, and I had the opportunity to write a script. At the time, it was kind of just a bit of an exercise. Nothing I really took seriously. But Marvel and DC were doing at the time was that they were releasing books, or versions of comics – they called them director’s cuts. Basically what it was, people were shown a version of the final product where you would get the first half of the books – the raw pencil art. The back half of the books, all the script. And because I’m in film school – you see these scripts and they’re not what I expected scripts to look. It was really similar, at least, there’s a connection to film scripting.

I never really had an interest in drawing. I’ve always been a drawer at school. Everyone thought that’s what I’d end up doing. But the reason I was drawing was because I wanted to get into film and television and was much more comfortable with putting shots together.

The baseline is that; the interest has always been there. Visual storytelling. Whether it’s film and television, or through comics. I think at the end of the day, I have stories I wanted to tell. The visual narrative way is the way I wanted to do it.

TCI: If you could choose a dream licensed series to work for, what would it be and why?

TJ: The dream series? I’ve been fortunate that Aliens was the dream series. As far as I’m concerned, Aliens is about as perfect a production and storytelling experience as it comes. The artwork in there kind of shifted the perspective. Aliens coming along when it did was kind of this perfect thing. I would really like to go back to it, and do it all on my own where I write it and draw it. Nothing against Brian who’s a good friend of mine who’s the writer for the Aliens book, but he knows that my heart is in writing and drawing my own things.

Everyone kind of has ideals on superheroes and things like that, but I think everyone at some point wants to draw Batman or Spider-Man or something like that. Beyond that, it’s pretty much my own stories. That’s pretty much where my heart’s at when it comes to dream projects now. I’ve been fortunate enough to do the things I’ve grown up with, and sort of purge all that desire out of my system. If DC were to come up to me and say “we’d really like you to draw Superman,” who is a character I have little to no interest in, but if they were to say I get to write however I want, I get to draw it however I want, then that to me is a dream job because they’re trusting me enough with that property. Or with that character.

TCI: What do you expect from this year’s Comic Con

TJ: All I want from these things is for people to come out and enjoy it. So much of what I do, coming from an illustrator particularly, but probably writers as well, is a lot of what we do is behind the desk from our homes. We don’t really, unfortunately, get a chance to get out all that much. Especially if you’re smashing out deadlines, like a lot of people who work for bigger companies do. It’s always good to get out and meet everyone that you interact with through social media or whatever else that you get your work out in front of people through. Getting outside the bookshelves. For me, that’s kind of the biggest thing. I don’t like having expectations for everything as that leads to disappointment, but I’m hoping people come out and have a good time. Generally. It’ll be fair to say you can expect that for all the people on the ground. These things are kind of fun and games for everyone.

Queensland Theatre 2019 – A Season of Dreamers

Can a sex-clown save the world?