The Pacifist Rage of Martin McDonagh

In the 2012 metafictional film Seven Psychopaths, screenwriter Martin (Colin Farrell) bemoans that he’s unable to write anything that doesnâ€™t involve â€œguys with guns in their handsâ€. This has been a tension in the work of writer Martin McDonagh since his earliest days as a playwright in Ireland, a simultaneous aesthetic fascination and moral disgust with violence.

As a young playwright, McDonagh told an interviewer for Bomb Magazine that he had â€œrespect for the whole history of films, but a slight disrespect for theatreâ€. This dichotomy led him to create plays like The Lieutenant of Inishmore, which opens with a description of a living room containing a â€œHome Sweet Homeâ€ embroidery and ends with a scene involving two men sawing the limbs off a body. McDonagh didnâ€™t so much subvert maudlin Irish drama as gleefully demolish it, writing plays dense with plot, wordplay and violence. 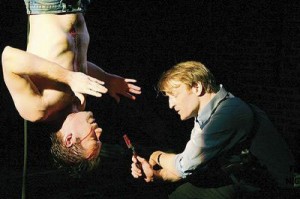 A writer with an incredible ear for dialogue, his plays (with the exception of the most recent two, The Pillowman and A Behanding in Spokane) all take place in rural Ireland, using regional dialects to craft dialogue that is simultaneously lyrical and deeply profane.

But what stopped them from devolving into a mere thumb-nosing at tradition (though there was plenty of that), was a moral seriousness at the heart of even his most lurid works. In writing The Lieutenantâ€¦, a satire of Irish sectarian groups, McDonagh said that he was â€œtrying to write a play that would get me killedâ€, while lamenting that â€œparamilitaries never bother with playwrightsâ€.

His first feature film, In Bruges, involved a rookie assassin trying to escape his profession after a job gone horribly wrong. The repercussions of violence permeate the movie, which at the same time treats us to wickedly funny lines like, â€œIâ€™m sorry for calling you an inanimate fucking object. I was upset.â€ 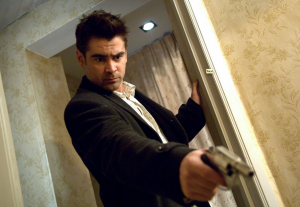 Itâ€™s a have your cake and eat it too approach that differentiates him from filmmakers like Guy Ritchie or Shane Black who tread in a similar hyper-verbal, darkly comedic milieu. McDonaghâ€™s films and plays are violent works that are passionatelyÂ anti-violence, written with what he has referred to as a â€œpacifist rageâ€.

Itâ€™s a rage that has no consideration for sentimentality or decorum and can often lead to places that are as ridiculous as they are dark. To quote Ghandi, â€œAn eye for an eye leaves everyone blindâ€. But to quote Billy (Sam Rockwell) of McDonagh’s Seven Psychopaths, â€œNo, it doesnâ€™t. Thereâ€™ll be one guy left with one eye. Howâ€™s the last blind guy gonna take out the eye of the last guy whoâ€™s still got one eye left? All that guy had to do is run away and hide behind a bush.â€

You can kind of see the logic, if you squint.