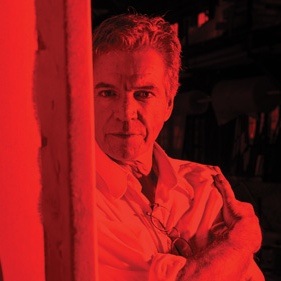 The play follows the legendary American artist Mark Rothko as he paints a series of murals for the soon-to-be-opened Four Seasons restaurant in New York City.

Colin FrielsÂ stars as the obsessive, self-absorbed Rothko. He inhabits the role completely; every gesture and line is delivered with a stunning lack of self-consciousness.

In 2010, Red won the Tony Award for Best Play. Alfred Molina played Rothko in that production.

Its difficult to see how anybody, even the talented Mr Molina, could have played the part as well as Friels does now. Just a few lines in and one forgets that the neurotic Jewish man standing on stage is nothing more than an illusion. The accent is flawless too, by the way.

Playing opposite Friels is up-and-coming actorÂ Tom Barton. Red is Bartonâ€™s first outing with the Melbourne Theatre Company and, to a certain extent, it shows. He is a fine actor, yet in this production he lacks the stage presence that Friels seems to embody so naturally.

When given the opportunity to really run with the material, he carries the audience with him. Unfortunately, the role provides few such moments. Instead Ken, the boyish assistant played by Barton, is largely relegated to the position of audience spokesman.

Red is excellent, make no mistake. The play runs for one and a half hours with no interval, but the time rushes by unexpectedly quickly.

The dialogue is clever and faced paced, the staging beautifully conceived (though scene changes are at times distractingly slow) and the soundtrack perfectly timed. Viewers will need to keep their wits about them to keep up, but the pay-off will be worth it.

Rothko once lamented the disappearance of a golden time in art, decrying its loss to â€œtons of verbiage, activityâ€. How ironic is it then that his own story, as told through Red, proves this observation false. Theatre is truly alive and richer than ever.

Red runs until theÂ 19th of MayÂ at the Playhouse QPAC.

How Much?Â Adults start at $50 (concession rates are available)

Kerstin was a guest of the Queensland Theatre Company.