Planes Of Reality At The Judith Wright Centre

Planes of Reality, exhibited at the Judith Wright Centre’s shopfront, features seven local artists and has you taking a walk down the uncanny valley in an immersive escape from the everyday.

A stroll down Brunswick St train will take you past several tantalising gallery shopfronts – however lots of local galleries remain shut til late January – I was, however, lucky enough to catch the tail-end of the free Planes of Reality exhibit after the Judith Wright exhibit was closed for the Christmas/ New Year’s period. While the show closes its doors for the last time on 23 January, I’ll be sure to follow the work of the local artists included in the future.

Planes of Reality exists as part of the Flying Arts Curator Development Program, and was an opportunity for seven emerging curators to flex their muscles to direct an exhibition for the first time. 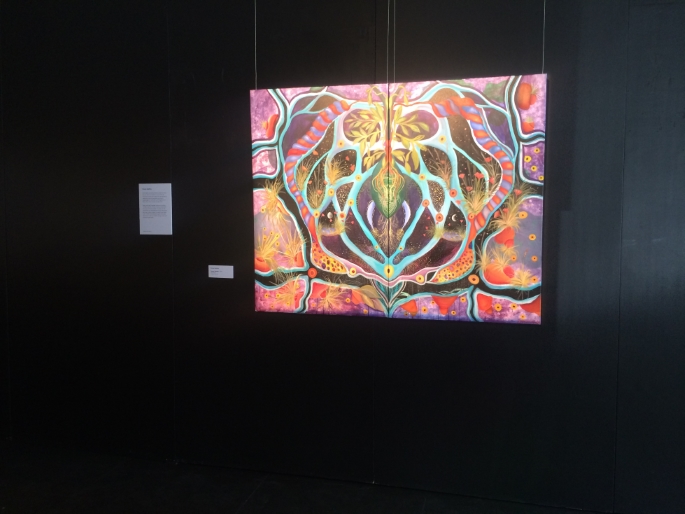 Much of the work was based on subverting the everyday world and leading you into a fantasy alternative – I was struck by Emma Godfrey’s vibrant, otherworldly oil piece, nearly taking up an entire wall in the dark artspace and depicting hints of psychedelic foliage amongst an ambiguous dreamscape.

The piece that had initially drawn me to the exhibit was resplendent in its old-world charm and detail – and to my delight, there was more by that artist in the same vein. Life and Death Vessels: A Collection of Curiousities by Sophie Kratz was the piece on display in the shopfront, and features amalgamations of different animals preserved through taxidermy, from a two-headed duck to a white rabbit spliced with the wings of a cockatoo, giving the appearance of fictional beasts yet to be discovered.