A fun and simple addition to an iconic Kung Fu franchise.

The IP Man: Kung Fu Master repeats this twice, once at the beginning and once at the end. “Practice” stuck out to me. In many ways, Ip Man 5 feels like practice. It doesn’t break conventions or reinvent the genre. It’s not crisp, or clean. More than anything it’s playful. With thousands of entries spanning across decades to compete against IP Man 5 does not cut deep into the legacy of Kung Fu cinema. But does it have to? 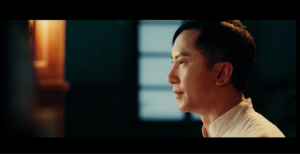 I am no expert on the Ip Man series, luckily this sequel doesn’t require much to be understood. Yu-Hang To plays the titular Ip-Man, a police captain in Foshan. The movie’s answer to why do we practice kung fu? Is simply to serve and protect the people. A job made difficult, for the captain as Japanese forces begin to make a move on Foshan. Through the 90-minute Kung Fu adventure Ip Man fights against seas of ax-wielding gangsters, and elite army generals, while investigating a high stake and high profile murder. The plot is overall simple, and easy to follow, with a few nice misdirections towards the end. 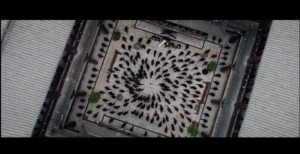 If you are a fan of the genre, the fighting won’t blow you away. Fast camera cuts make the fighting feel jumbled. The choreography and camera work do a really creative job in keeping the action dynamic and interesting, but sometimes the fighting is hard to follow and a little corny. Regardless Ip Man 5: Kung Fu Master still delivers the classic fights and larger than life set pieces that the genre is known for.

There is something tranquil and calming about IP Man: Kung Fu Master. The movie feels like an exercise in execution. Scenes are lit in warm nostalgic yellow or moody blue rays. The movie takes itself seriously but feels a little tongue in cheek in its overall presentation. Care and work were put into this movie, and I don’t know what I would’ve liked done better. There is familiarity in its form, that gives the movie a comforting feeling despite its more wacky antics. Ip Man 5 feels a lot like chicken soup, simple, easy, it might not be perfect or fancy but it’s exactly what you wanted. I highly recommend seeing this film in theaters.

The Details
What: Ip Man: Kung Fu Master
When: Out Now
Where: Everywhere, except Victoria