Punk, Pop, and The Gooch Palms: An Interview

The Gooch Palms are a dynamic duo from Newcastle, New South Wales and are currently based in Los Angeles- we had a chance to chat with this groovy duo.

Their songs are a rich culmination of pop and garage punk, as their exploration and mash-up of both of those genres is reminiscent of Iggy Pop and the evergreen 80’s. Made up of Leroy Macqueen and Kat Friend, the punk sweethearts and long-term couple display unprecedented style in both their aesthetic and their sound.

I was lucky enough to talk with one half of the equation, Leroy Macqueen, about the loss of David Bowie, the immortality of pop music, Burger Records and how it feels to perform 130 shows in a single year.

Following the tragic loss of David Bowie, I thought it was pivotal to discuss the impact he had on the band. Upon listening to a single Gooch Palms song or watching one of their music videos, you can tell that the Starman had a presence in their creative schemes and processes.

â€œIf you were in a Norwegian death metal band you would still love David Bowie, he was just that sort of guy. I think he saved Iggy Popâ€™s life and career and he made my favourite Iggy Pop record. I think people forget sometimes that he had a heart and a brain and he was human like the rest of us.â€ 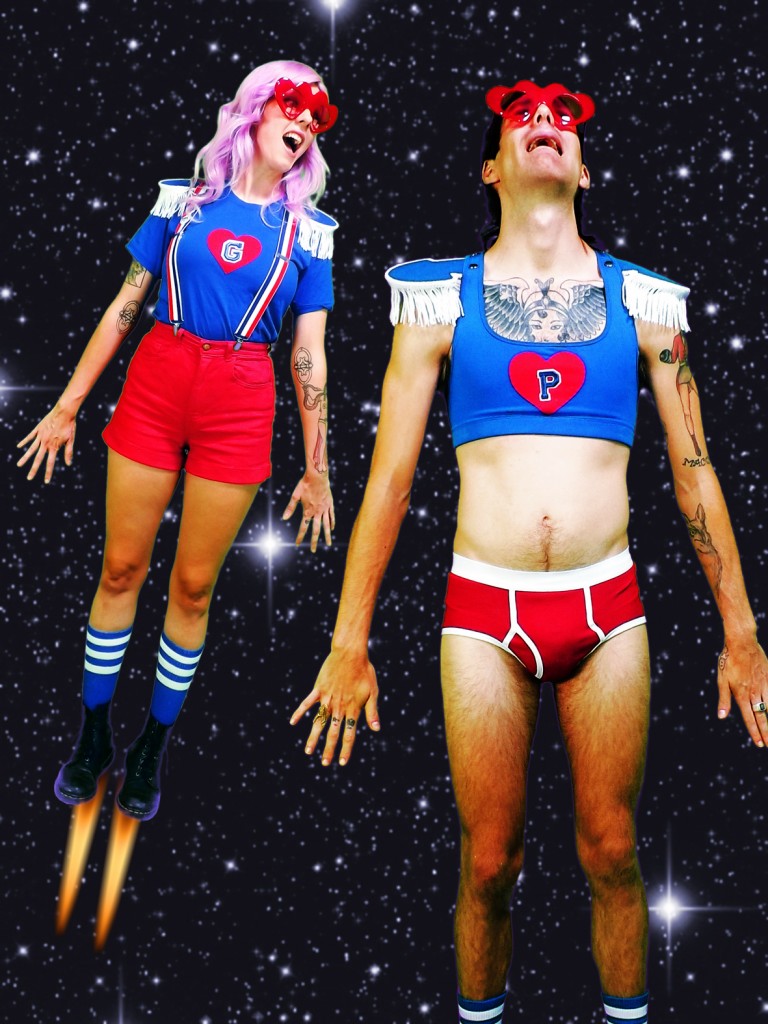 â€œKat said when we initially met that we should be a little bit David Bowie and a little bit Iggy Pop and thatâ€™s how we started the Gooch Palms.â€

Their definition of punk is not as one would conventionally conjure, perhaps with images including safety pins, mohawks and torn apparel. Instead, The Gooch Palms shed light on the ways that punk music can be more fluid than that, while still maintaining the fundamentality of the movement. Macqueen displayed an openness to every genre The Gooch Palms indulge in, expressing that there is an element in pop in every genre we listen to.

â€œPunk doesnâ€™t have to be Sex Pistols or anything, but punk is just about sticking the middle finger up no matter what.Â Thereâ€™s an element of pop in every band, even in punk, even Slipknot and Iron Maiden. People get a bit funny about pop and punk being together, but pop is in everything and itâ€™s all about melody and holding it down.â€

Living in Los Angeles was a big move for the couple, considering their roots. Macqueen expressed thankfulness for his hometown, but sheds light of the immense cultural differences there are in the Californian music scene to the small town that he calls home.

â€œI went from sitting at home listening to Ty Segall to going to their shows and having drinks with them. And our roommate was the drummer from Thee Oh Sees, and everyone in the LA music scene supports each other. Weâ€™re not living through Youtube or Spotify, weâ€™re seeing the bands with our own eyes.â€

Seeing live music is a pivotal experience for everybody, even for those who are usually on stage. Macqueen talks about how watching bands is still an important and sacred ritual for The Gooch Palms, and their indulgent in live music has not changed despite their geographical location.

â€œItâ€™s really good to see bands doing really well, and it definitely kept me on my toes. A lot of people in bands sometimes forget how great live music venues can be, but for us and growing up as kids, we see our favourite bands skip past Newcastle on their rosters and weâ€™d be devastated. So for us the fire is definitely still burning.â€

â€œI never pictured myself being the only guitar player in Gooch Palms. Kat had always wanted to be in a band but I donâ€™t think sheâ€™d imagine sheâ€™d be a drummer.â€

But here they are. Things continue to escalate for The Gooch Palms, as their career in the United States has relaunched their debut LP Novoâ€™s. The album seems to constantly re-incarnate, and stays relevant over the years, despite having been first released four years ago.

â€œEverything changed after we put out an LP. Weirdly a year later the record came up, and then it was released on Burger Records recently, so itâ€™s always been alive.â€

As exhausting as it may sound, The Gooch Palms performed 130 times in 2015, and ushered in the new year of 2016 in Brisbane at the Black Bear Lodge. Macqueen however, shows no signs of slowing down, as he speaks on the immense rewards both him and Kat gain after every performance.

â€œWe did about 130 shows this year and we sort of just realised, â€˜hey this is what we do nowâ€™ which is crazy, and Iâ€™m grateful for it every day.â€

â€œWe want everyone at our shows to just have fun. You donâ€™t even have to be thinking about us, but as long as everyone is smiling and being kind to each other, it makes us so happy. Our crowds are always ready to go. I feel like recently there was a sudden burst in energy, where people are forming circle pits and are stage diving.â€ 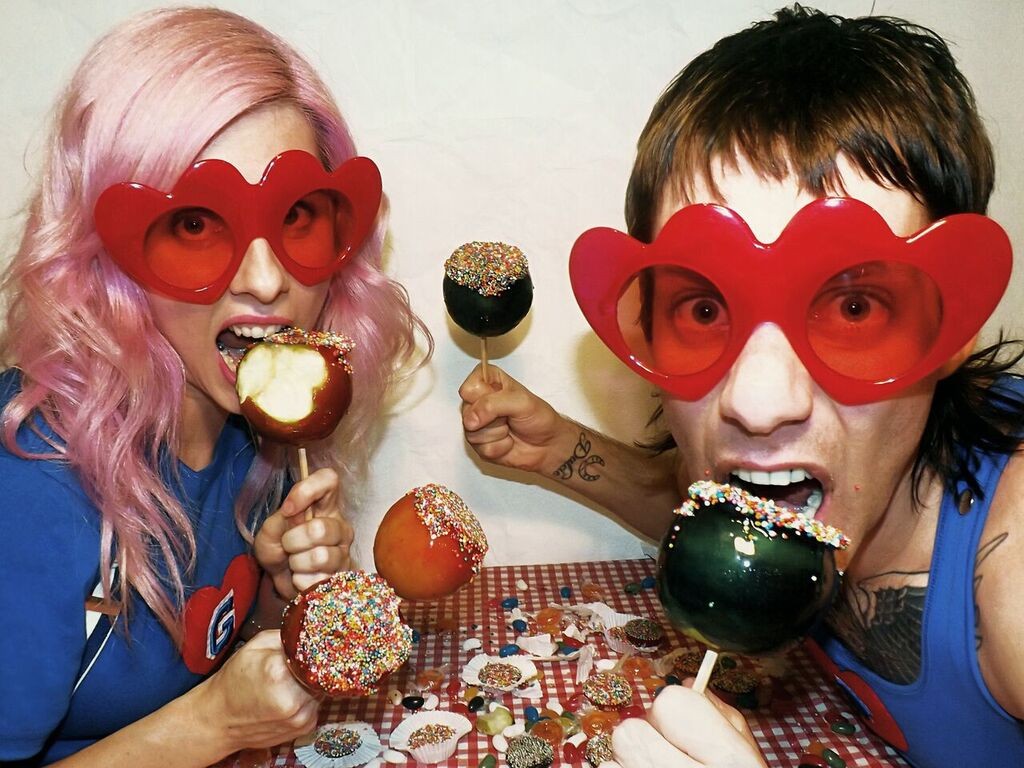 â€œAfter a show I feel the best you could possibly feel ever in your life. Weâ€™re always searching for that feeling after a show and everything went smoothly and the crowds loved it. We try to meet as many people as we can and become friends with our listeners.â€

We can expect a lot more from The Gooch Palms in 2016, as they continue to hustle and chase after that unbeatable rush.

â€œThis year there’s just going to be more.Â More Gooch Palms. New record, new songs and more touring. Weâ€™ve already been writing to stay on top of it, and we hope weâ€™re around for many years to come.”

One of the fundamentals of punk music is its DIY aesthetic. It liberated and encouraged the youth in the 1970â€™s to pick up their own guitars and create their own mini-movements in their own homes. Gooch Palms did the same in the small town of Newcastle, and utilised their own creative visions, with the help of listening to any and all genres at home, to then embark on their own journey that neither of them expected.

They are enjoying the ride and continue to do so, and although 130 shows in a year may seem like a lot, Macqueen told me with excitement that he is excited to do it all over again.

Monkey Business: How Brisbane Will Be Celebrating the 2016 Chinese New Year