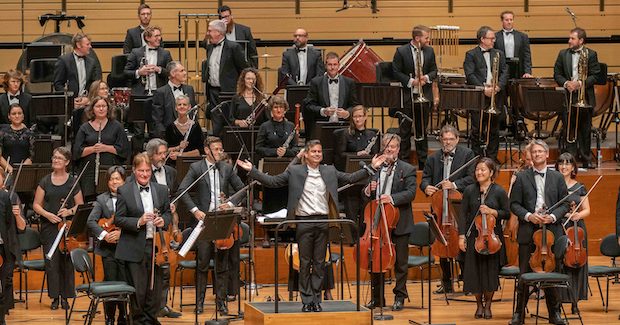 Queensland Symphony Orchestra’s Reel Classics on Sunday afternoon was a romp through iconic movie music and a real party to see them back on stage.

Presented at QPAC as part of Queensland’s Own, Reel Classics was QSO’s first time back together as a full orchestra and performing to a live audience since before the pandemic.

QSO were led under the baton of conductor Dane Lam and joined by baritone Jason Barry-Smith as their host. Dane and Jason introduced the various pieces in an engaging, bantering dialogue.

Naturally, the concert could only open with the 20th Century Fox Fanfare by Alfred Newman and John Williams’ Star Wars (Main Title). These two bold, brassy fanfares were perfect for warming up the audience.

Next, for a shift in mood, they paid tribute to Beethoven’s 250th birthday with his Symphony No. 7 in A Major, Op. 92. The symphony begins with a simple, hypnotic rhythm in the violas, cello and bass, which is then transported around the orchestra, building in intensity. This piece has been used in many films, so most notably in a critical moment in The King’s Speech. 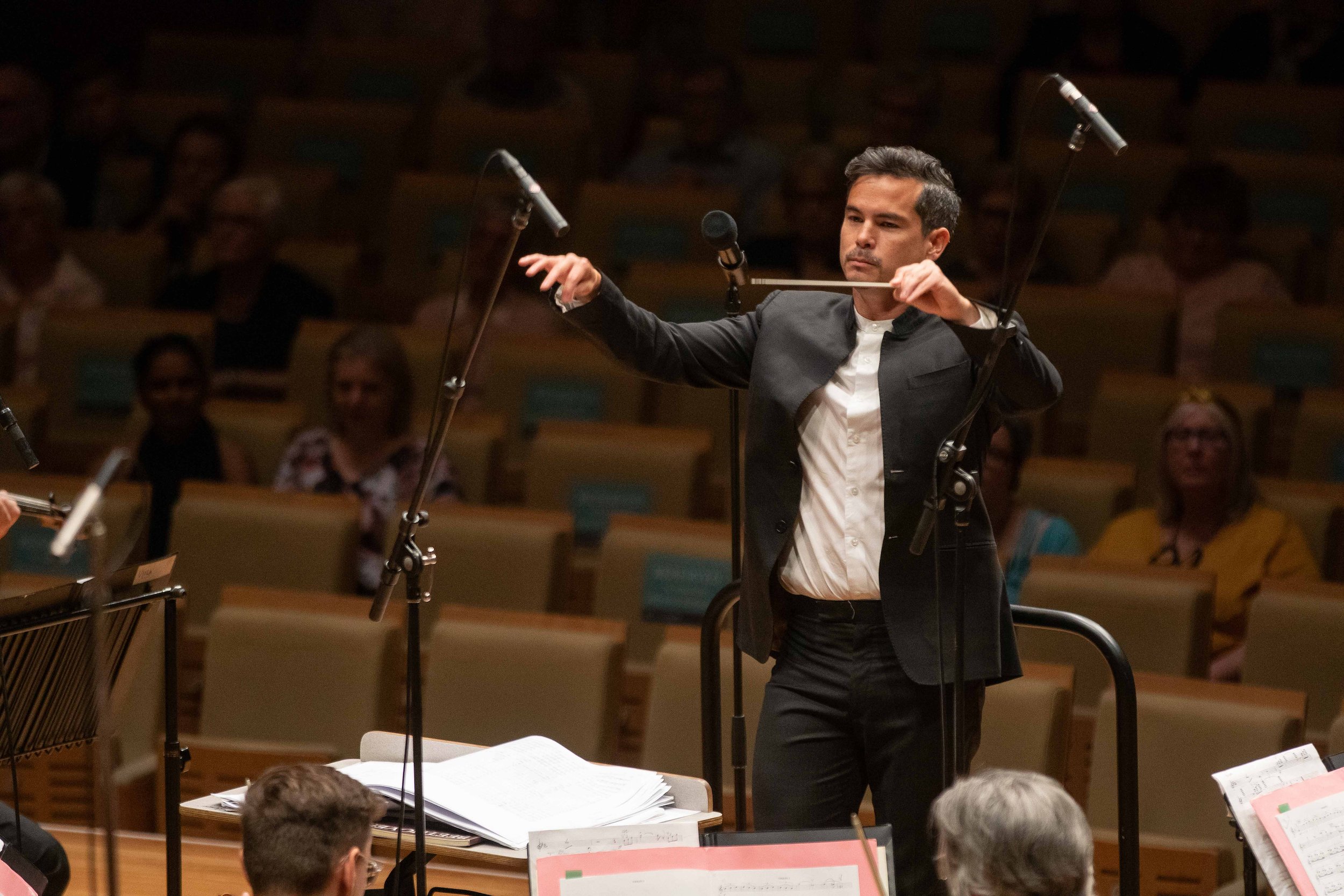 Then, it was back to Williams for music from Harry Potter and the Philosopher’s Stone. This theme, Harry’s Wondrous World, features a warm, celebratory tune in the strings, with magical flourishes from various instruments around the orchestra.

Then, to opera. QSO played the intermezzo from Pietro Mascagni’s Cavalleria rusticana (Rustic chivalry), which tells a story of love, passion and violence, set in a Sicilian village. This piece was used in The Godfather Part III. QSO’s performance transported the listeners across the seas to Italy.

The next two pieces celebrated females heroes, with Rachel Portman’s Belle (Suite) and Williams’ Princess Leia’s Theme. Portman’s evocative music from the 2013 film Belle tells the story of Dido Elizabeth Belle, one of the few mixed-race women to enter the high society of 18th century England. Williams’ Princess Leia’s Theme passes quietly around from instrument to instrument on a bed of shimmering strings, before building to a magnificent conclusion.

The brass and percussion woke up for Howard Shore’s The Lord of the Rings: Suite from The Fellowship of the Ring. This dramatic suite features the folksy sound of the Hobbit, the brassy, heroic Fellowship and the harsh clashing battle. QSO tackled this complex, rising and falling suite with ease. 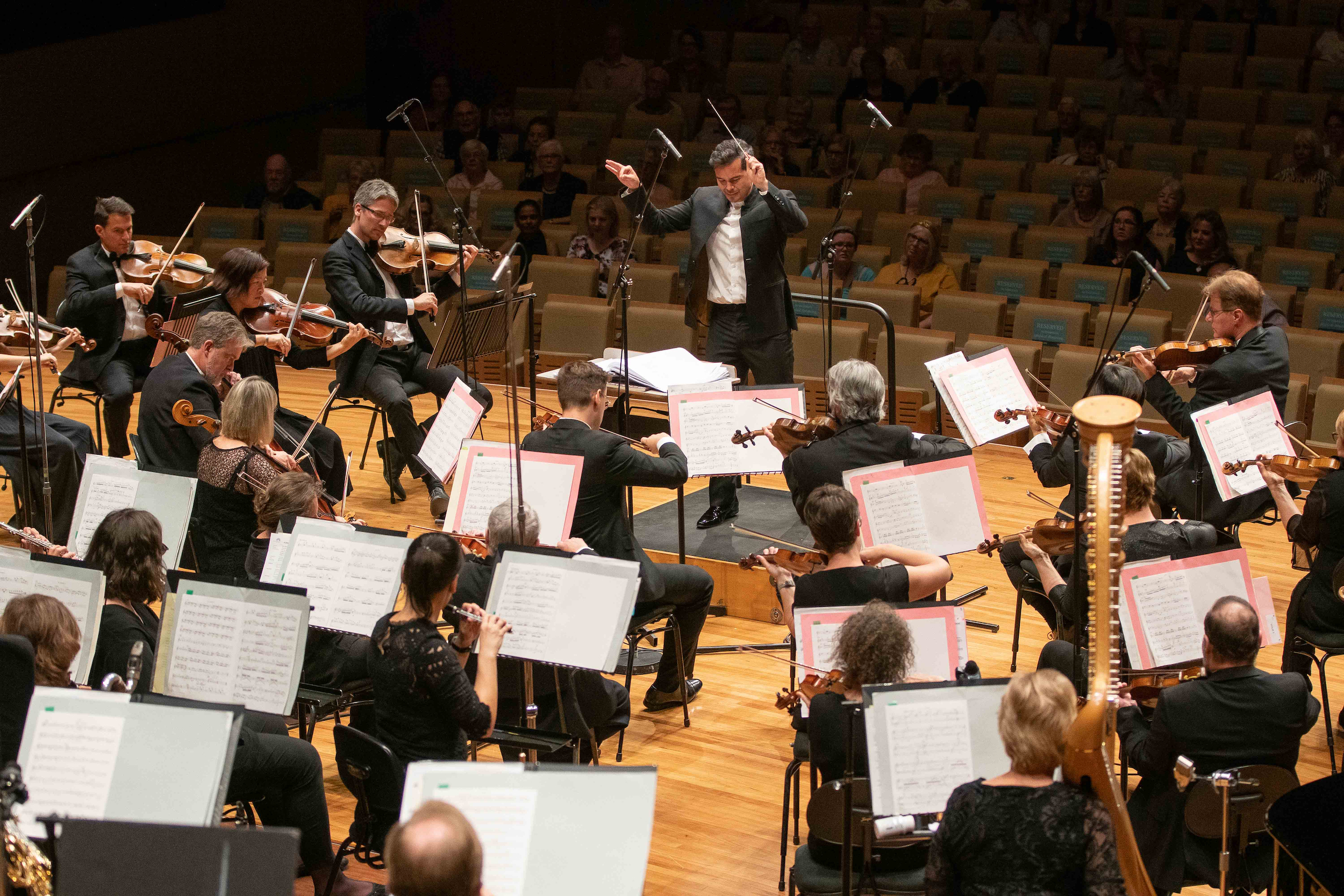 Then, to the love theme from Cinema Paradiso by Ennio Morricone. The piece starts gently, full of longing, before growing with passionate strings, and then fading. QSO’s string section resonated with rich, warm timbre.

Jason Barry-Smith announced that the next piece, Johann Strauss Jr’s On the Beautiful Blue Danube waltz, has been featured in over 35 films. The floating atmosphere of the work was used in 2001: A Space Odyssey to depict weightlessness. QSO’s performance carried me away.

To close the concert, of course, they had to return once again to John Williams. This time, it was for his flying theme from E.T. the Extra-Terrestrial and Throne Room and End Title from Star Wars. The triumphant flying theme soared through the concert hall. To cap things off, Jason Barry-Smith returned on stage in a black cloak and challenged Dane Lam to a lightsaber duel. 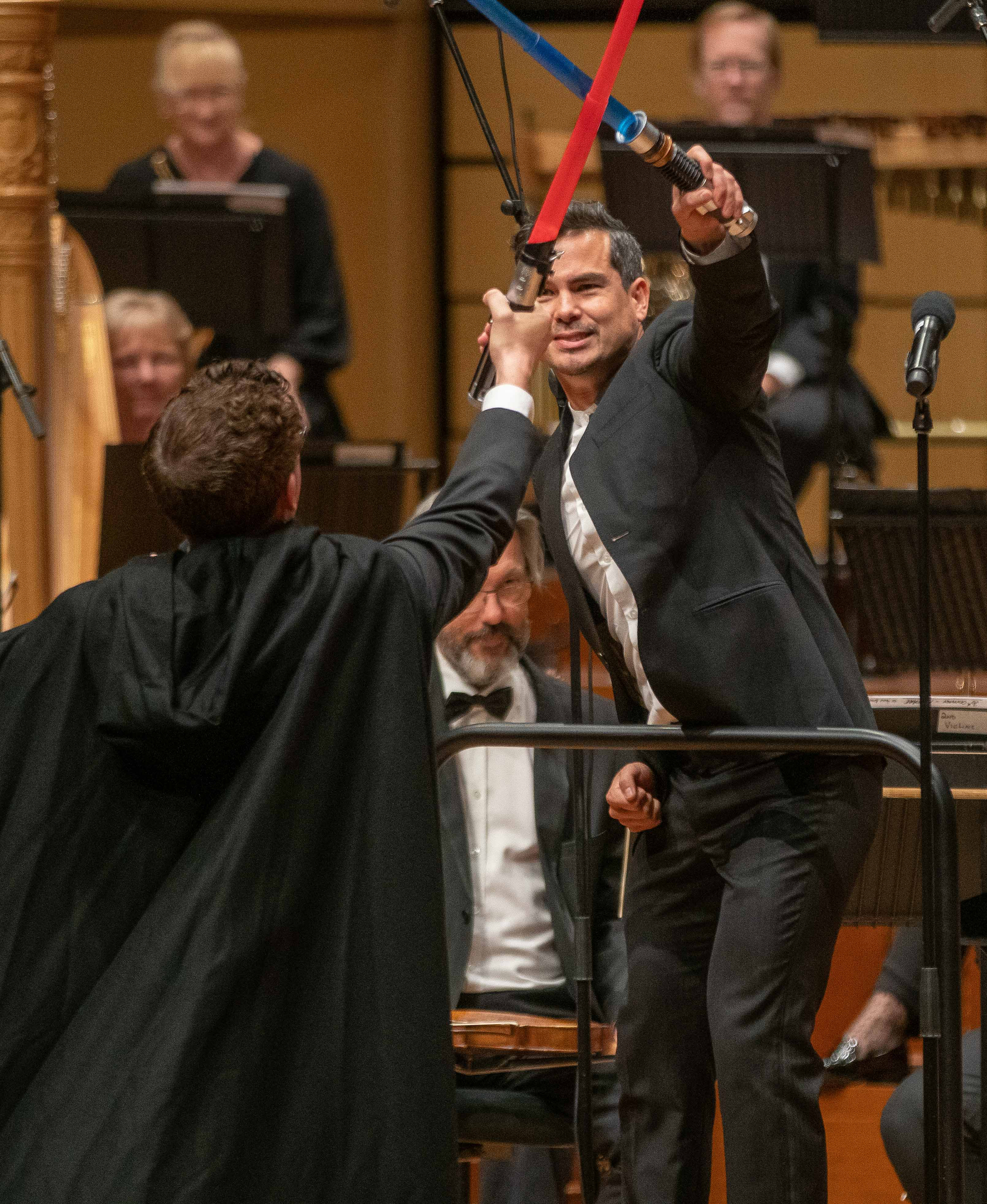 The socially-distanced, half-capacity audience burst into applause. In all, Reel Classics was a thoroughly enjoyable concert, and a fitting way to celebrate QSO’s return to the stage. What better way to finish off the weekend, then in a concert hall with such fabulous, fun-loving and resilient musicians.

Be sure to grab tickets to QSO’s upcoming concerts and enjoy the return of live music!

More on Queensland’s Own performances and program here.

A day in the life of a TV Presenter: Emily Dickson