Queensland Theatre to Reopen with World Premiere of The Holidays

Queensland Theatre is ready to welcome back audiences in November, with the world premiere of 2018-19 Queensland Premier’s Drama Award winner The Holidays.

Written by Brisbane playwright David Megarrity and directed by Bridget Boyle, The Holidays is a humorous yet thought-provoking portrait of the relationship between son, father and grandfather. Oliver Holiday is plucked from school and taken on a trip with his parents to his grandfather’s seaside shack, only to find Grandad isn’t there.

The season runs from 14 November to 12 December at the Bille Brown Theatre, with strict COVID-safe protocols in place, including social distancing and capped audiences. Queensland Theatre is thrilled to tell stories and hopes audiences can relax, enjoy and escape their reality.

I had the chance to attend the media call at Bille Brown Theatre September 9. I rose at dawn (well, it was kinda early…) and trekked to the city. Across the road from the vibrant artworks of Fish Lane, and watched over by Brisbane Festival’s finches, Montague Rd is a fitting place for Queensland Theatre. At the door, I met writer David Megarrity, actors Louise Brehmer and Bryan Probets and some fellow journos.

We were led inside through the foyer and into the awaiting theatre. Director Bridget Boyle walked in in tall boots and a colourful dress. Photographers from various outlets jostled for space, swapping lenses and shifting lighting equipment. They rearranged their subjects (the cast) many times (lucky they’re actors). David, Louise, Bryan, Bridget and Artistic Director Lee Lewis posed around the stage, set and empty theatre seats. I mingled with writers from ABC Radio, Brisbane Times, Courier Mail, QWeekend and more. Then, it was time for interviews. 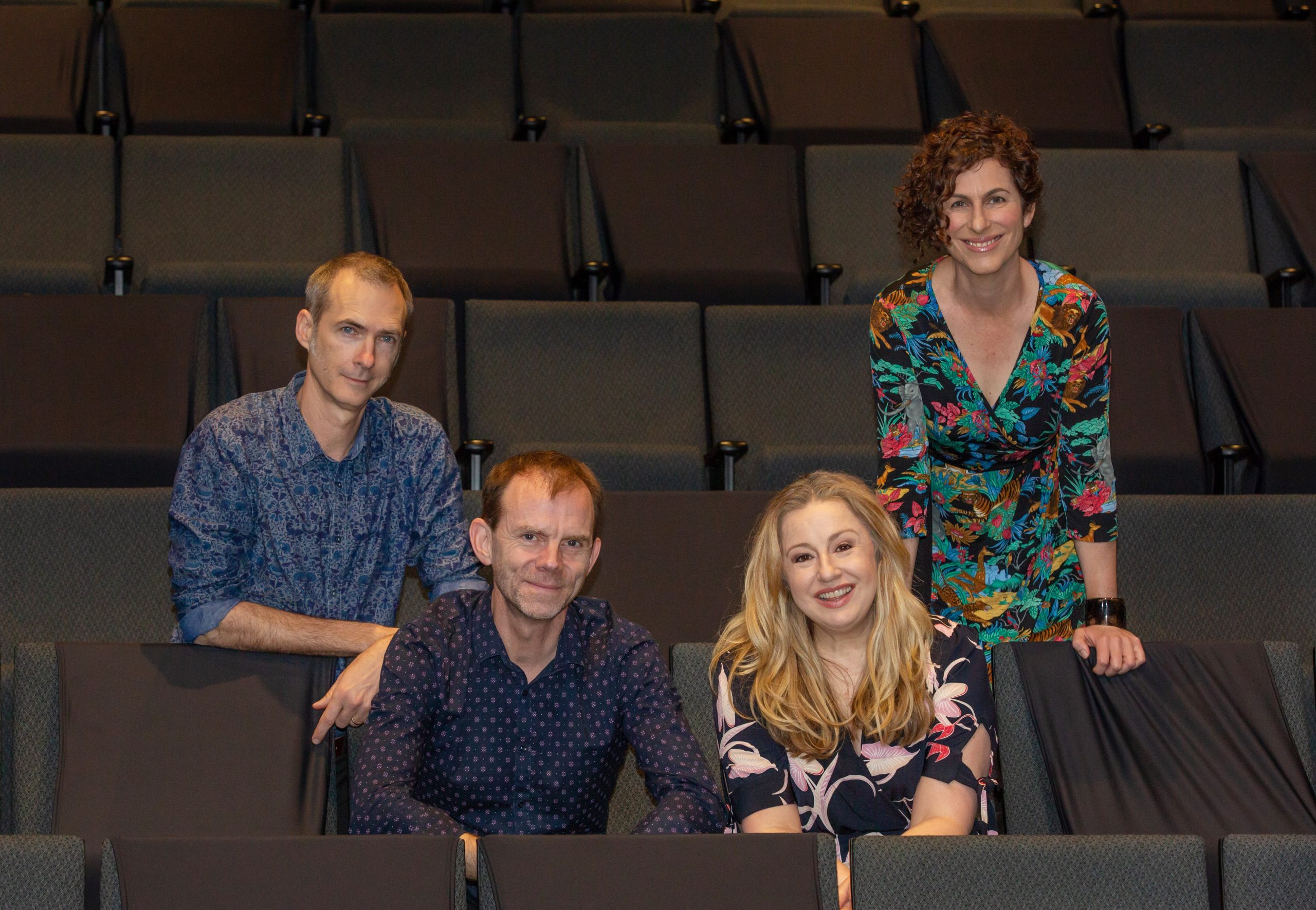 I found a space in an empty rehearsal room to catch up with Lee Lewis. To start off, we chatted about how it feels to reopen Queensland Theatre and challenges along this journey. She said they’re taking things step-by-step, putting all the changes, contingencies and strategies into action. They’re working with audiences to ensure they feel safe. But, it was all hypothetical until now, “Until you put a show on the stage, you don’t know what’s going to happen.” She said they’re reconfiguring backstage and rehearsal spaces, to minimise contact. There’s so much unknown. Lee said, “Everyone’s still on tenterhooks, because, again, if there’s a change in the health condition of Queensland, we realise we’ll lose the capacity to perform again.”

Then, we talked about what audience can expect in The Holidays. Lee said, “A new Australian play is always a great adventure to go on… I like that lack of predictability and I love audiences who embrace that.” She said the play has lightness, familiarity, family, but also a little darkness. “It’s not an escapist play… It takes you slightly away from your world, but not completely.” Telling a story from a Brisbane writer, is exciting for Lee. She said, “The stories written about us, for us, about things that matter to us are always more exciting… When you tell a local story, it gets under your skin. You recognise the character, so it’s how a father down the street behaves.”

Putting together Queensland Theatre’s first show after a prolonged closure and pandemic is no small feat. I asked which moments of the production process Lee is looking forward to, and she laughed and said “All of them!” From the rehearsals, to the first preview, opening night, and then every night of the new play. She said, “When you start to see the vision come together, and the first time the audience sees the story… People encountering the story… We give people something to think about that’s not the reality we’re in.” 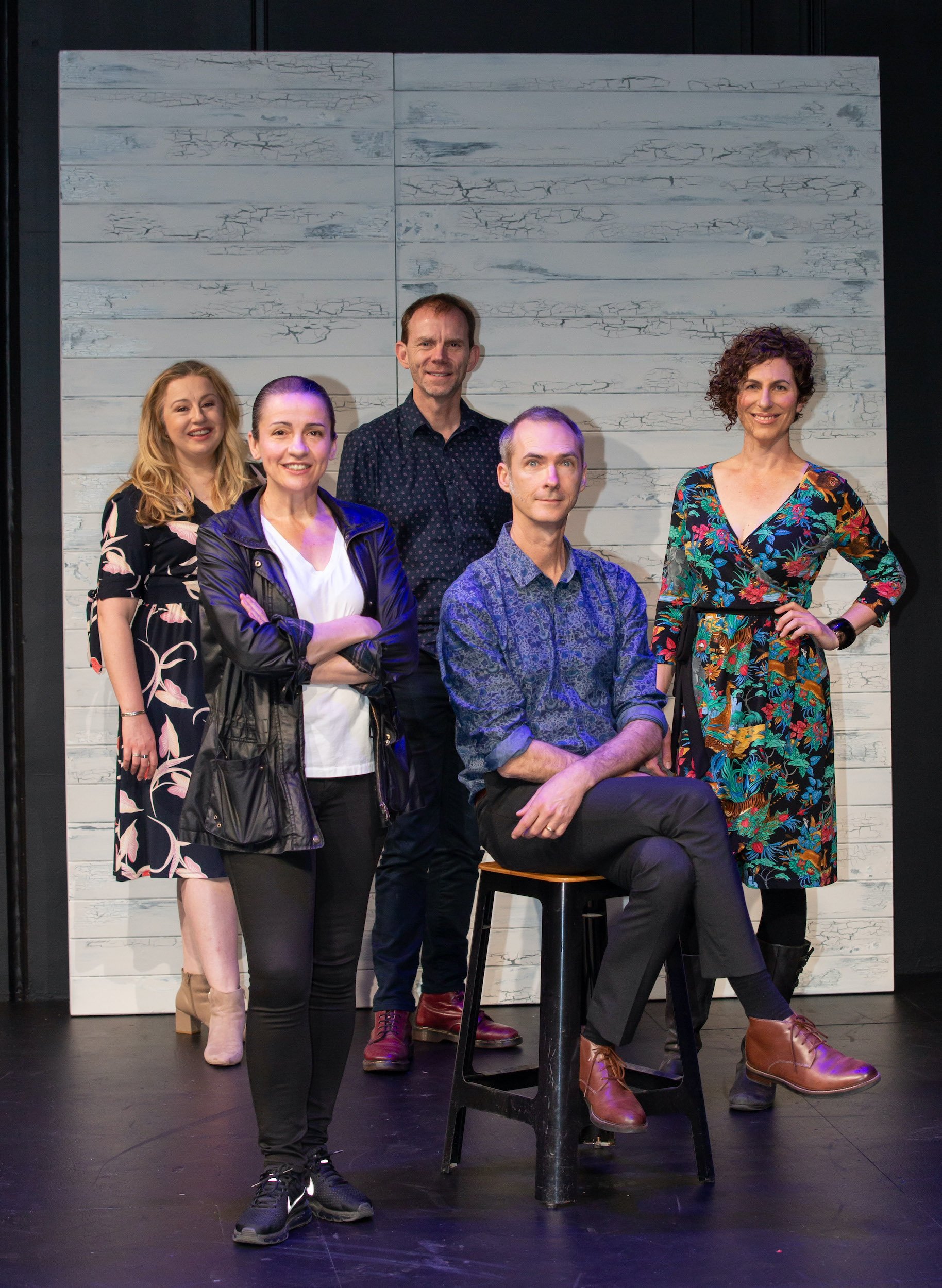 Panning out, we discussed how Lee has lead Queensland Theatre during this time of uncertainty. She likened it to the ski jump in the Olympics. “You know when the skiers go down the hill and then launch into space? And you hope to land? This year has been that shape and we’re in the descent and I’m just hoping we stick the landing.” Lee has made many decisions in this time and said, “There’s no one who’s good at this. Accepting that you’re not going to make all the right decisions but your intentions are clear, then you can move forward.” She has been astounded by her team’s response, particularly in marketing, education and production. “There were days where we thought this was impossible, but then we worked together and solved problems… It’s a beautiful team and a great company, that hasn’t changed.”

Despite the uncertainty, Queensland Theatre are forging ahead with plans for later this year and next year’s seasons. Lee said they’re hoping to take part in the reopening of QPAC. “The venue is open for Brisbane Festival but the home companies are trying to do something so audiences can come back and see the Queensland Opera, Symphony, Ballet, us and Circa… It’s a government initiative.” She said they are launching a season for next year, some old and some new plays. “We’re giving people something to look forward to. We all know things could change, but that’s okay, we’ll get there.”