If you follow Given Terrace and turn left into the little pink laneway, you will find an abundance of vintage dresses, handmade skirts and pompom earrings – which is Ra Ra Superstar. Shop owner and designer Kathy Szwedzinski is the lady behind it all, sheÂ spoke to The Creative Issue about her love of vintage, her creative process and the shops bottom-line, sustainability.

â€œI always had a thing for second-hand,â€ says Kathy, who was initially a stylist working in New York. â€œI grew up op-shopping with my mum and sewing – I was always a bit of a collector.â€ After coming back to Australia in 2001, Kathy continued working as a stylist but began a side project of selling vintage clothing and pieces she had collected, which eventually evolved into a Bondi shopfront. â€œThere was a really big movement towards vintage at that time, so the shop was an outlet for me when I wasnâ€™t busy with styling. For a while though, it wasnâ€™t my main focus, not until I opened Ra Ra Superstar.â€

After moving to Brisbane and having her daughter, Kathy found herself with spare time and a mind full of inspiration. She began designing and making clothes to sell at local markets. â€œI was doing markets in the Valley for a while, and the shop in Sydney was open until about 2008 and that was doing really well, and then the GFC happened, and it was a got tricky to run the shop while I was living so far away.â€

Kathy closed her Bondi shop, but not long after came across the Paddington space. â€œI wasnâ€™t really looking but I was like, â€˜wow, this is really cool, itâ€™s got this awesome laneway, itâ€™s in a really good spot.â€™ I saw a lot of potential with it, and decided to open the shop.â€ 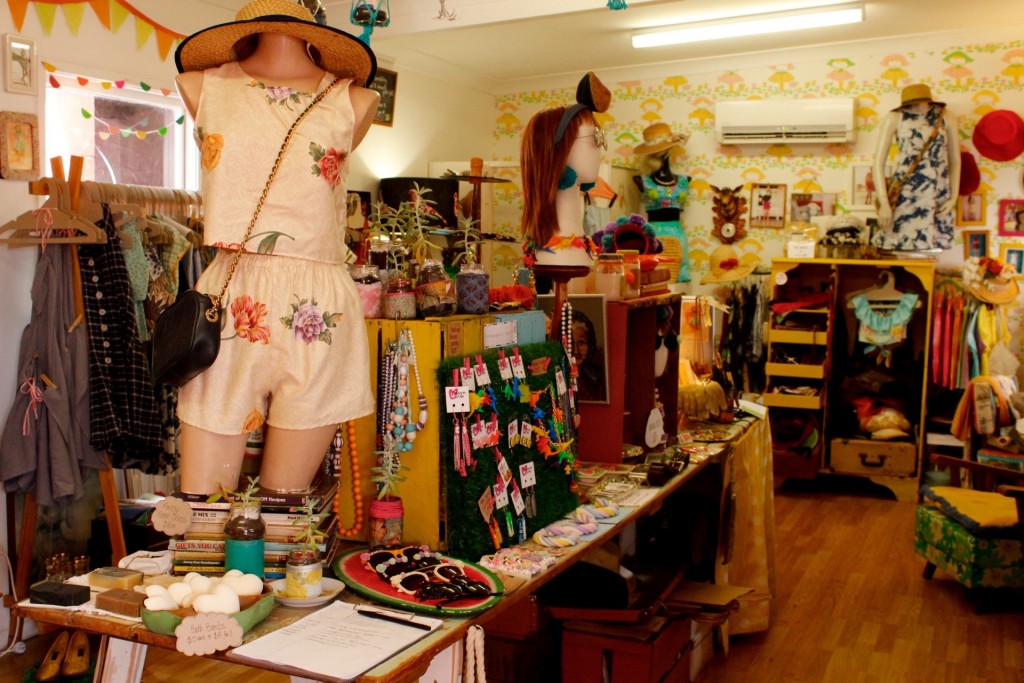 The name came from Pop Magazine, at the time Katie Grand was the head stylist, with photographers Mert & Marcus, â€œit was very visual and amazing,â€ Kathy says. â€œThere had an article about Britney Spears, and they had this crazy, very avant garde shot and article about her and the tittle was Ra Ra Superstar. And I thought â€˜huh, thatâ€™s a really good name for a shop.â€™â€ Kathy kept the name in the back of her mind and thought it was perfectly fitting for her new Paddington location.

â€œI wanted Ra Ra Superstar to be fun, quirky and a little bit individual, not too mainstream, always with a bit of a vintage theme. I wanted it to be a bit of a fantasy, thatâ€™s why I like this space, because of the laneway, it just takes you on a journey as you walk around.â€

The space itself is unlike any other, and the clothing it sells is much the same – a mixture of clothes designed by Kathy handmade in recycled fabrics, vintage pieces that have been reworked and jewellery and accessories made by local artists. 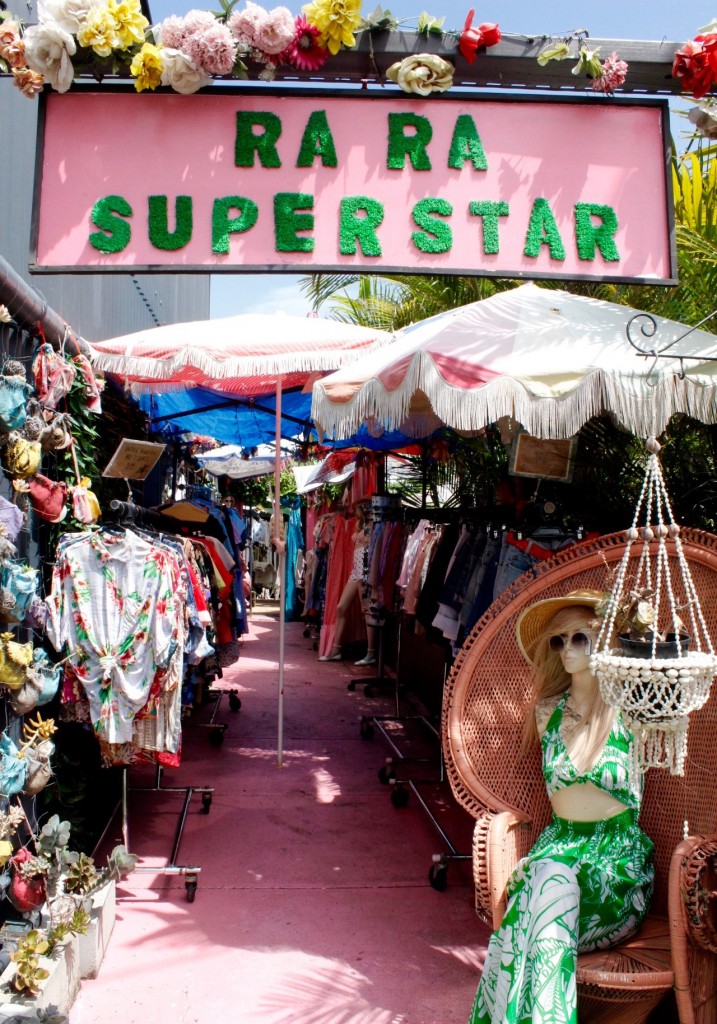 â€œWe attract the customer who wants something more sustainable, and bit more personal,â€ says Kathy, in comparison to the fast fashion stores that have popped up around the city in the last couple of years.

April 2013 saw the crowded Rana Plaza garment factory in Bangladesh collapse, killing 1,138 textile workers and injuring more than 2,000. The fashion revolution that evolved after the disaster as well as the film, The True Cost – that explores the environmental impact made, means many more shoppers are now aware of the fashion industries damaging impact. â€œThere is definitely a rise of people seeking out clothes that are not as destructive to the environment,â€ Kathy says.

Locally, others are joining the sustainable movement, with West Endâ€™s SWOP similarly recycling clothes. Internationally, there is American Apparel and Reformation – both brands particularly inspire Kathy. â€œAnyone who is trying to do something that isnâ€™t made in China and make a go of having a business with local production â€“ I really respect. I think they are really keeping local skills alive, I think businesses in Australia are starting to realise that we are losing a lot of skills.â€ 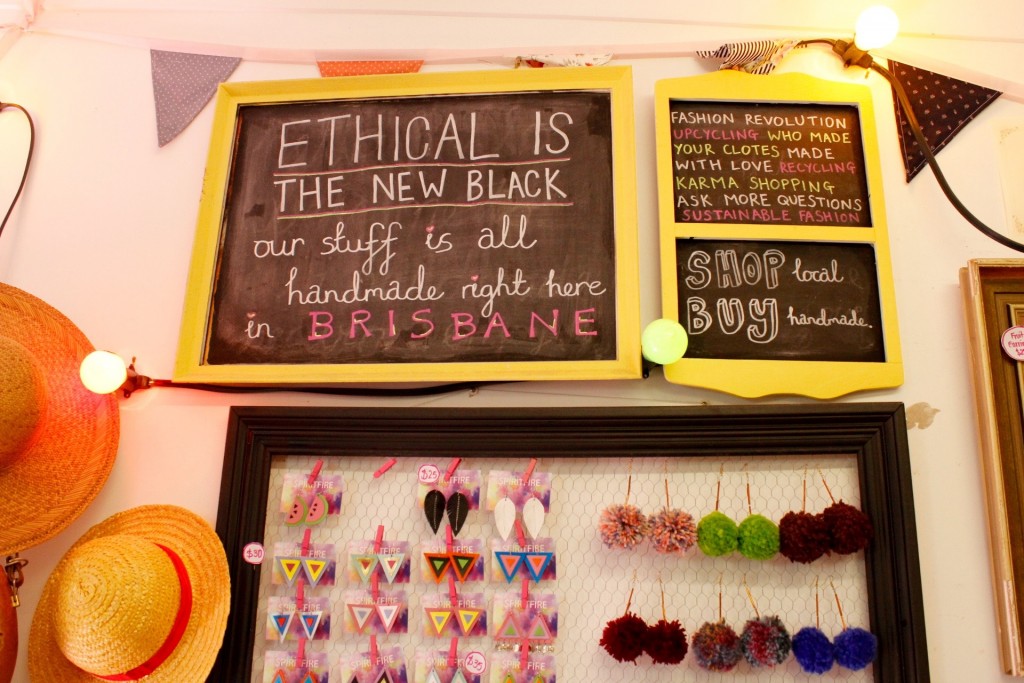 At Ra Ra Superstar, Kathy sources her recycled fabrics from op shops, Gumtree, eBay, auctions – people come to her as well. As for her designs, she tends to do similar shapes each season, â€œI try and keep it really wearable and classic, so you can mix-and-match over seasons and keep it consistent.â€ Kathy then cuts the textiles to shape and takes them to a assortment of locals to be sewn.

â€œI donâ€™t make huge quantities of anything,â€ Kathy explains, â€œI might make like only 5 pairs of shorts in size 12, but someone might be really small, so Iâ€™ll make them smaller for them. Occasionally there will be a dress that somebody wants without sleeves or shortened or something like that,â€ she says.

â€œEveryone is different and everyone has a different vision of what they are looking for, so we try to help out as much as we can.â€

You can follow the lovely Kathy onÂ InstagramÂ @rarasuperstar or facebook.Â