Reaching Out To Kurilpa Reach

West End’s favourite up-and-coming groovers Kurilpa Reach kindly gave us a glimpse into their life in the last year, their formation, and what’s on the horizon. Additionally, they’ve shared some valuable tracks that you can add to your quarantine playlist!

The Creative Issue: What has your day-to-day been like (as a band) in the last couple of weeks?

Kurilpa Reach: To be honest we’ve all just been cooped up in our own houses for the last three weeks so we’ve just been trying to keep ourselves busy practising and writing by ourselves.

TCI: Can you define your sound in one sentence?

KR: We couldn’t decide between reggae, funk and psychedelic – so we’re just going with groove. Reggae… but make it funky and groovy.

TCI: Where did the name Kurilpa Reach come from?

KR: Kurilpa Reach is what we call the stretch of the river that runs through the Kurilpa area (West End). I can think of countless spots along that part of the river where we have held some sort of occasion. There is a big appreciation felt by all of us for that sense of connection to a body of water, I think it shines through in our music a fair bit.

TCI: Where did you guys meet?

KR: We all went to the same school except none of us were really friends. We started running into each other at house parties after high school and eventually organised some jams in Vicente and Pablo’s back shed. We all felt we had great chemistry and all brought something new to the table, and within a month or so of jamming we decided to form the band.

TCI: What has been your most memorable moment in the last year?

KR: Woodford over the New Years period was insane. Being in such a vibrant hub of music and art and then being able to play your own sets is truly incredible. The crowd response was amazing, we’d see people come back for our sets over the festival.

TCI: Is there a debut album in the pipeline?

KR: At the present time no, but we’re beginning to see the foundations being laid for one. Concepts and ideas that we’ve been slowly working on throughout the past couple years, like jams or song ideas that we keep coming back to and slowly chipping away at or tweaking. I think when we have a more clear concept or direction for a larger body of work is when we’ll start to seriously start working on an album. 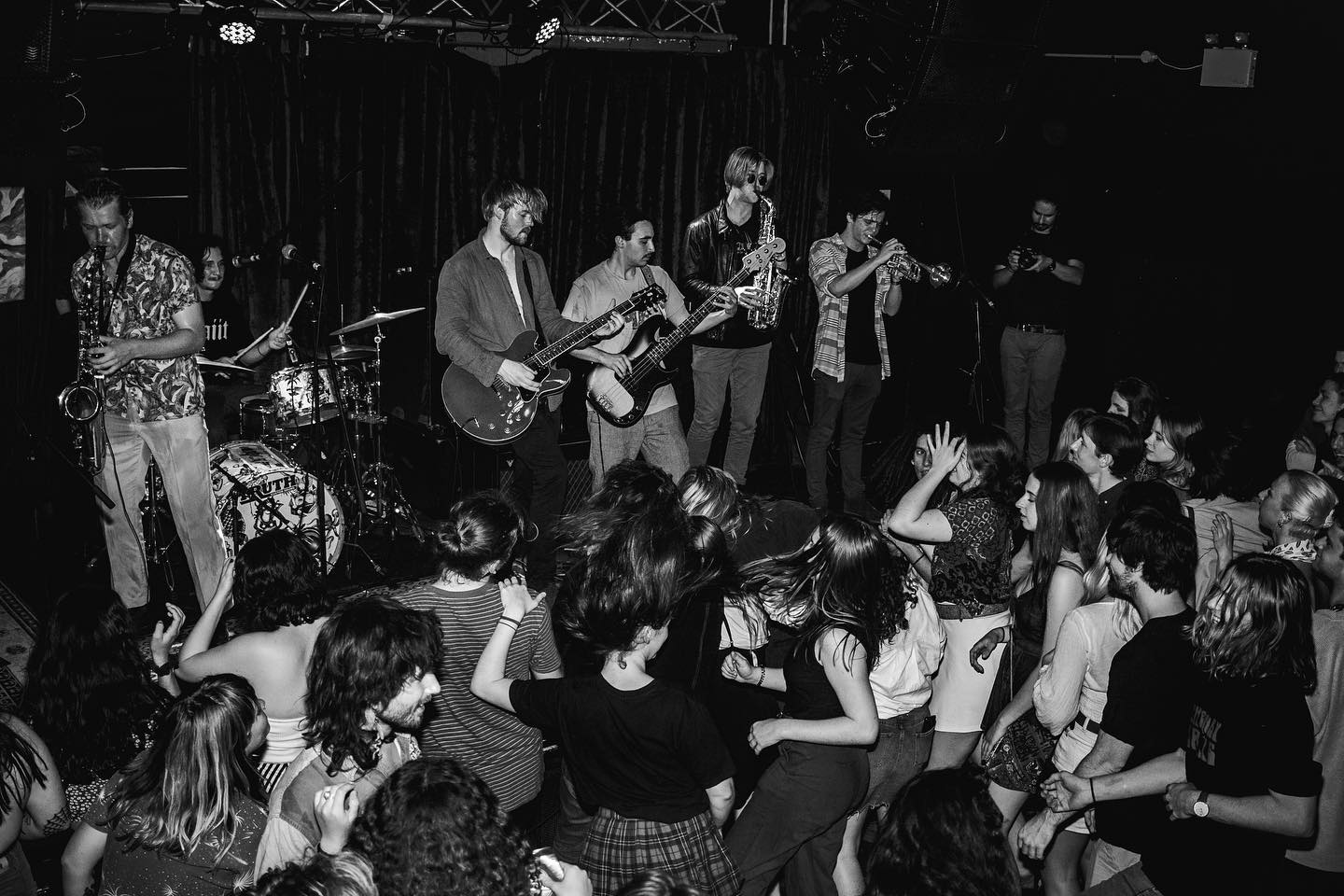 TCI: Name a few musicians that inspire you.

KR: D Double E. He’s an old school grime and jungle emcee that we’ve always loved because of the way he approaches writing a verse, it’s very out of the box and eccentric. His delivery is immediately recognisable due to his energy and emphasis on certain sounds and rhyme schemes – you can definitely hear his influence in Vicente’s vocal delivery!

Jordan Rakei. He’s been Luke’s favourite singer for ages, he actually went to the same school as us! We used to watch him perform at our school assemblies. He’s got a phenomenal voice and all his instrumentation is sick, we’re all big fans of jazz and neo-soul and it’s great to see someone from the same area as us be so successful on an international scale.

George Benson. Absolutely insane guitarist and a great singer, we were so keen to see him play at Bluesfest this year until it got cancelled. His jazz-funk fusion has a very iconic sound, you can tell it’s a George song as soon as you hear his guitar tone, very tasty! Especially in our newer stuff, you can hear his funky influence. You can also hear his influence in another great Brisbane group we love, Kerbside Collection.

TCI: You have such an electric live set, during your time off do you plan on making any changes to it?

KR: We’re all doing a fair bit of writing and jamming on our own in preparation for when we can start gigging again. Not being able to jam together is still a bit weird as we usually have a very collaborative approach to song-writing. We’ve been sending recordings of ideas to each other, however it’s hard to really capture that live energy through voice memos.

TCI: How do you think the Brisbane music scene has been in the past year?

KR: It was going really really well until it just came to a halt. Before it hit the fan there was so much music going on all the time in Brisbane, whether it was larger shows or more bands releasing really good music. At the moment it feels like everyone is in the same boat as us, trying to figure out new ways to engage with fans online as well as preparing new ideas and material for when we can start gigging again.

TCI: Is there a Brissy artist you want to shine a spotlight on?

KR: The Seefelds, we played our first proper gig with them, and they’ve always been a favourite group of ours. Fantastic song-writing and they just gel so well together, they have such a good stage presence and their live energy is captured so well in their recorded tracks.

TCI: Can you leave us with an album we should listen to while isolating?

KR: ‘Flow’ by Bobby Alu – this album is a fave of the bands, it’s insanely well written and seems to be the perfect soundtrack for doing anything. Super slick and slinky grooves are abound throughout the album, it’s very rootsy but also has quite a contemporary feel. Favourite track is definitely ‘Dust’, a real slow burner reggae delight!

It’s great to see that there is such an optimistic and focused approach being taken by Brisbane artists such as Kurilpa Reach during this difficult period. They have clearly highlighted their intent to create and motivate while in isolation – and good on them. Allow this energy to inspire you, listen to music, support local artists, and look forward to getting out to their shows in the future!

A Day in the Life: Marli Smales