Brisbane indie-pop-math-rock band Requin have clicked into gear with new music and shows ahead of their debut LP Shark. Released earlier this month, new single ‘Rules That Won’t Be Broken’ is a lyrical exploration of when it’s time to cut someone out with guiltlessly toxic behaviour. Featuring raw crescendos in odd-time that soundtrack the highs of making this choice, along with the deep-in-thought lows in the tragedy of it all.

We caught up with vocalist Fionn Richards, explaining that “[It] refers to the assumed, brittle barriers of safety that one often doesn’t realise are being taken for granted. The song (and forthcoming album) speaks to the shock and subsequent ripple effects that occurred when someone repeatedly crossed these assumed barriers.”

Even ahead of its release the double-meaning refrain “I can’t be the same” found itself lingering in audience-members minds. In 2019 Requin filmed a performance at Underground Studios, giving a close look at how they translate their arrangements live. Exaggerated pauses, Keeley Young’s instrument swapping and Fionn playing bass with his feet; the group keep their sets understated yet rich.

Tracking ‘Rules’ in the same studio with Christopher Brownbill, the band opted to keep a live element there. “We made an effort to honour the way the song was written (in a room, standing across from one another) when recording it. In that way it will be similar to the way we perform it live, but also open to variation depending on setting and circumstances”.

Despite their confident approach to three-piece gigs, they’re more than happy to bring in bassist Joshua Strange for recording so that Fionn can put up his (bass-playing) feet. When digging for weird tour stories, multi-instrumentalist Keeley Young told us that drummer James Eyre Walker brought a white bathrobe to relax in while touring SE Asia. “He was my bunk buddy for most of the tour & witnessing his commitment to it was pretty special.” Currently on tour in New Zealand, we can be sure the band are enjoying the down-time between impressing the locals. 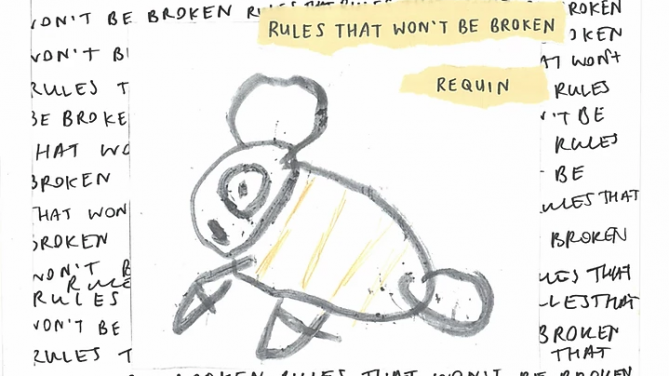 With influence vaguely present but too fluid to grasp, it can be hard to articulate what style Requin is. Fionn claims the band have grown this style organically by looking to their immediate feelings when they write, with no particular influence to guide them. Keeley chimes in to explain that most of their material gets a few face-lifts before we hear it, but the band remain calm and curious from vine to wine.

An approach so unassuming, the charmingly humble artworks and t-shirts turned to a theme as it helps communicate who the band is. “The child-like quality of it all feels pretty genuine to us as a collective. I like that playing music always reverts me back to a bit of a child-like state & so the simplicity & humbleness feels fitting.”

Requin continue their Aotearoa tour this March, returning to Brisbane next month for the single launch.

THE DETAILS
What: Requin ‘Rules That Won’t Be Broken’ Single Launch
Where: The Bearded Lady (138 Boundary St, West End)
When:  Saturday, April 4 @ 7pm
How much: TBA
Website: RSVP here