Question: What’s scarier than the wilderness? Answer: A Ned Flanders look-alike hunting you as you try to escape it, as depicted in this American remake of a Swedish thriller.

Unlike the majority of remakes, John Hyams’ R-rated romp blows the original out of the water. Försvunnen, or Gone, was a mostly mediocre movie with a story that got in the way of its scares. Alone has none of the mistakes of its predecessor, with Hyams terrifying his audience with spine-tingling suspense.

Jessica (Jules Willcox) just wants to escape her mysterious and tragic backstory. That’s how she finds herself driving on a remote, mountainous road where she’s stalked by a wire-framed psychopath in an SUV. After nearly being run off the road by the SUV, Jessica thinks she’s safe when she makes it to her motel. Little does she know, the bespeckled man has more plans for her than vehicular intimidation. 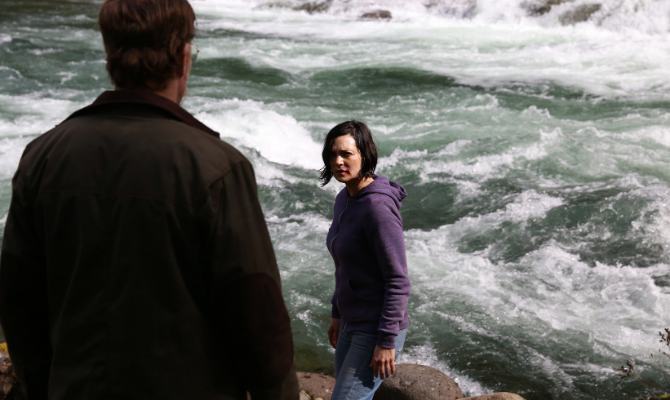 Alone follows Jessica as she tries to escape the terrifying figure only referred to as Man (Marc Menchaca). She battles a mangled foot, the panic-inducing wilderness, and Man’s chilling monotone, as she struggles to make it out alive.

While she’s not completely alone (a charmingly useless hunter – think cowboy Quincy Morris in Dracula – does make an appearance) Jessica is a tenacious final girl with top-notch survival skills. More Sam from the horror video game Until Dawn than Brittany Snow in Prom Night, Jessica takes her life into her own hands. Literally.

Even her slipups add to her strength: she is perfectly human, with all the blunders of someone terrified and all the wherewithal of a whip-smart heroine. Kudos to Willcox for balancing vulnerability and grit in her portrayal of Jessica. 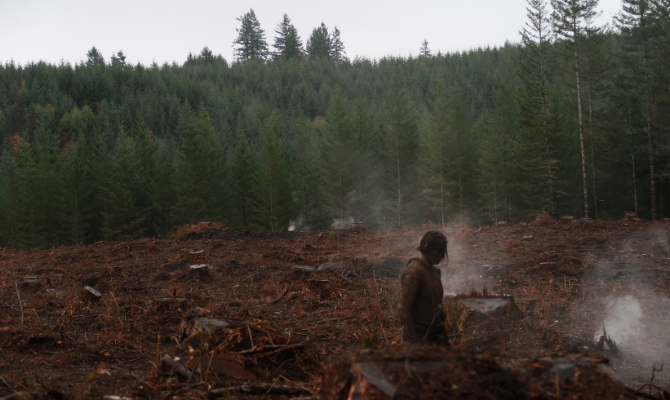 Menchaca tries to do the same thing with Man, but where Willcox seamlessly blends opposing characteristics into a well-rounded character, Menchaca’s attempt is slightly awkward.

He starts off strong: Man’s everyman appearance and humdrum speaking voice are distinctly creepy, but this creepiness wears off as the movie goes on. You can almost see what’s been borrowed from real-life serial killers – he has BTK’s normal guy disguise, Ed Kemper’s dead voice and eyes, and Robert Hansen’s modus operandi. However, true crime inspiration isn’t the issue. Kim Henkel and Tobe Hooper’s iconic Leatherface is based on serial killer Ed Gein, as is Norman Bates and Buffalo Bill from Silence of the Lambs, but the difference between these horror legends and Man is a distinct perspective from the writers and actors. 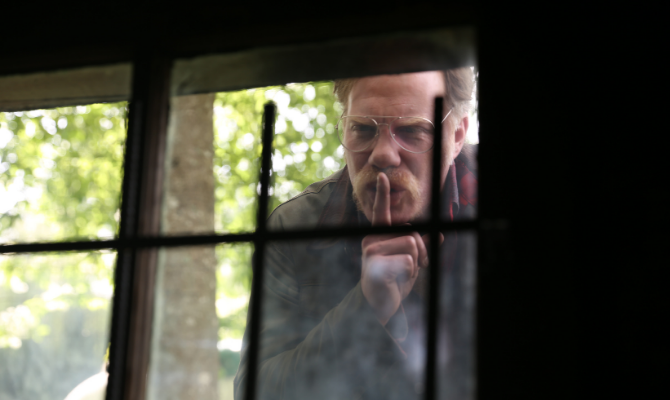 Take, for example, Norman Bates. The inspiration is clear: both Gein and Bates love their mothers to the point of psychosis, even dressing up as her after she’s dead. But Bates is brought to life by fictional embellishments, and Man is a puppet of references. Don’t worry, Man still fulfills his duty as a horror movie antagonist and doesn’t interrupt Alone’s tense pacing.

If you’re looking for a good scream, Alone will scratch all your scare itches. After all, there’s nothing more terrifying than the wilderness, except for a glasses-donning killer hunting you down in the wild.

Have Yourself A Kingswood Christmas!