As the last leg of their east coast My Second Mistake Tour, emotions of celebration filled the air of the Eatons Hill Hotel on Saturday night. The stage saw lots of hair, red wine, jokes and acoustic musical talent, making it an unforgettable show.Â

Doors opened at 7:30pm for the eagerly awaiting crowd.

Karl S. Williams, the first of two supporting acts, was all hair and all talent as he took to the stage at around 8:00pm wielding his banjo in one hand and a glass of red in the other. From the first lines he sung the crowd was instantly mesmerised by the raspy tone of his vocals, and each note that twanged from his guitar echoed throughout the room, keeping the audience in his trance. By kicking his leg out he would emphasise the accents he played on his six-string , and his body swayed as he sung and played, evidently losing himself in his performance.

He invited his friend Yanina onto the stage for a duet, where her ethereal vocals struck the perfect balance between his own raspy sounds. As he transferred across the stage to his keyboard he raised his glass to cheers the crowd, then invited Busby Marouâ€™s bassist and drummer Dj and Kenzo to join him for a pair of songs.

Further proving his musical ability, during his song and crowd favourite I Fell For You, Williams perfectly imitated the sound of a trumpet with his lips. After thanking Busby Marou for allowing him the privilege of sharing their stage, he removed his fedora and held it to his chest, closing his set with an a Capella special which left the audience wide-eyed, utterly in awe of his musical mastery. When he finished he replaced his fedora and bowed to the sound of an up roar. 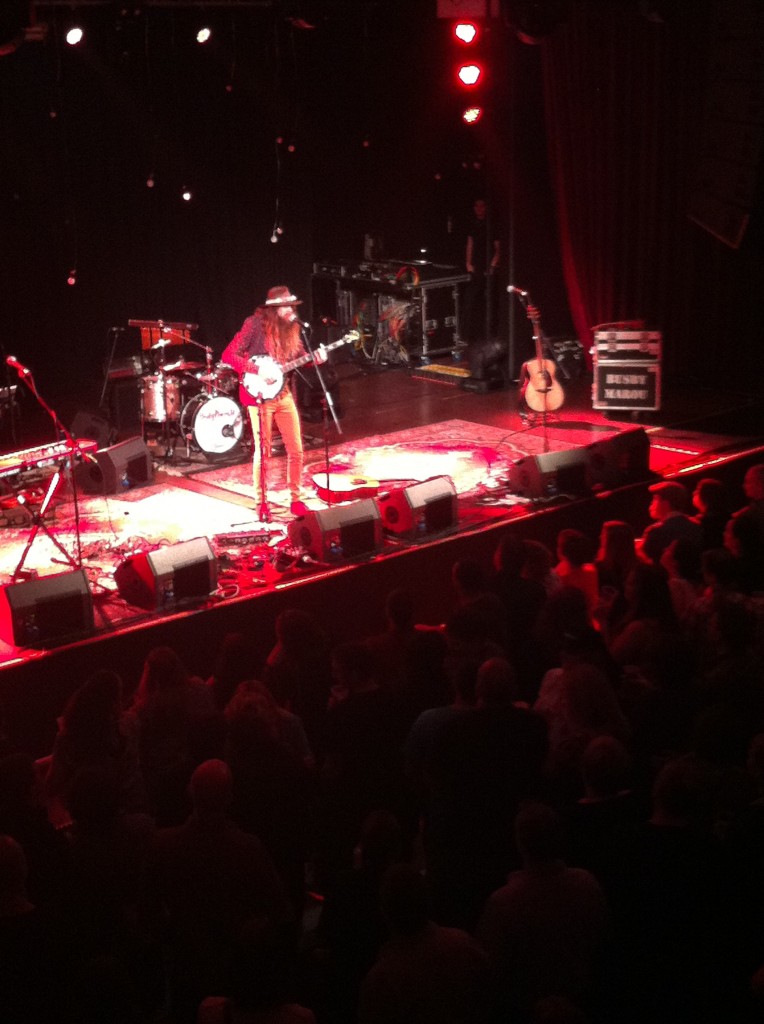 Shortly after Williamsâ€™ mesmerising performance, the second support act Darren Middleton, popularly known as the lead guitarist of Powderfinger, swaggered onto the stage and up to the microphone. Starting his set off with â€œBrisbane Brisbaneâ€¦ God itâ€™s good to be backâ€, he then threw himself into his performance. His acoustic sound evidently differed from Williamsâ€™, but still succeeded in hypnotising the crowd.

His set was another demonstration of a soul who knew how to handle a six-string. The accompanying violin soothed his sound, adding a string element that complimented his acoustic guitar. His set list rotated between slow, tranquil ballads and songs that picked up the pace with funky guitar riffs. Middletonâ€™s strong vocals rung out like each strum from his guitar, bouncing off the walls of the stage.

With a charismatic stage presence he actively addressed the crowd, stopping in between songs to explain the inspiration behind his music and reflecting on his Powderfinger era. How he engaged with the audience showed that he had mastered the live performance. Alike Williamsâ€™ set, Middleton invited Dj and Kenzo back on stage to join his performance, claiming, â€œTheir one rule is no rehearsalsâ€. Judging by how well each musician handled their instrument, you would never have guessed.

Middleton played a balance between testing new material and digging into his song bank and depositing some Powderfinger classics into his set, including their song The Metre, written way back in 2000. Before his final song of the evening, he closed his set by saying â€œEvery last one of us, myself included, will walk out of here with a massive smile on our face because Busby Marou will take us to that level.â€ He was right. 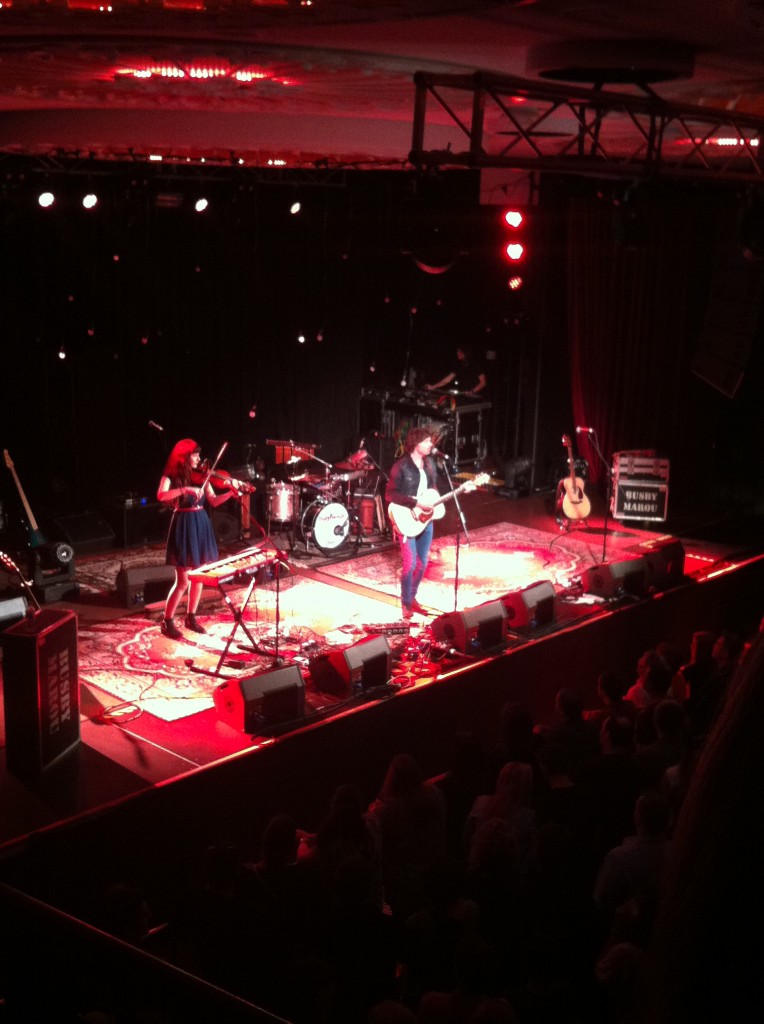 Having been well and truly amped by the appetizers, the crowd was more than ready for the main course. The anticipation for Busby Marouâ€™s entry was circulating through the air, and by the time it came for the duo to take to the stage the Eatons Hill Hotel was successfully packed out. As Thomas Busby and Jeremy Marou walked onto the stage around 10pm they were greeted by the screams of their already adoring crowd. Opening with their hit Get You Out Of Here, from the first strums of their guitars they had their audience members swaying along. Their upbeat folky tunes acted like a shot of caffeine for any sleepy audience members, the need to dance along being inescapable. Wearing smiles that reached one side of the stage to the next as they stared out into their audience, they lead into their next song with a â€œHow ya going Brisbane?!â€, causing the crowd to release screams that reached the roof. 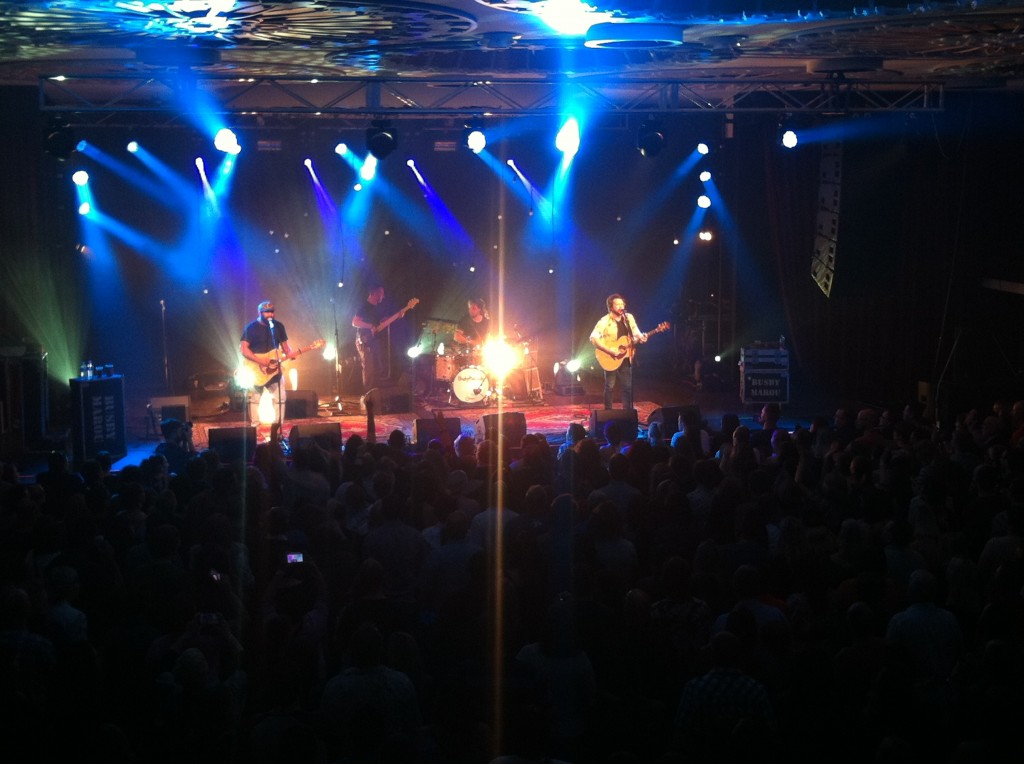 Completely at home on the stage, to the point where Marou felt comfortable enough to ditch his shoes and rock the bare-feet look during the entire set, the duo waltzed around whilst shredding during their guitar solos. Slowing down their set they led into 5 Rocks, a crowd favourite as audience members wrapped their arms around each other and swayed in time with Busbyâ€™s oohs.

During a break in their set Busby informed the crowd that this was possibly the â€œgreatest gig weâ€™ve ever playedâ€, sending them into proud hysterics. The pairâ€™s light-hearted stage presence was obvious, as they classically cracked jokes in between each break in their set list. Songs like Keep Me and Luck which appeared on their bill encouraged all audience members to dance, the percussive elements of these songs inspiring everybodyâ€™s feet to stomp in time with the beats.

Song dedications were being sent in all directions during Busby Marouâ€™s set. The first of many dedications was an old song sent out to Busbyâ€™s parents, who were watching their son do what he does best, from the second floor of the venue with a prime stage view. Later, before playing Waterlog, they dedicated the song to their backing band, Dj and Kenzo, naming them as â€œAustraliaâ€™s greatest rhythm sectionâ€. Playing another old song they sent out a dedication directed to their homeland Rockhampton, and requested the crowd help them pay homage to their roots and sing with them.

Their final dedication of the evening was to their sound engineers, Busby explaining â€œBecause we canâ€™t afford them weâ€™re going to dedicate a song to them insteadâ€. Specialising this dedication, the duo invited three friends to join them on stage where they all crowded around a single microphone and gave an a Capella performance. As a second gift to their beloved sound engineers, hilariously they sent a pair of Milky Bars into the crowd, to be passed back to them, shouting â€œMilky bars on me baby!â€ 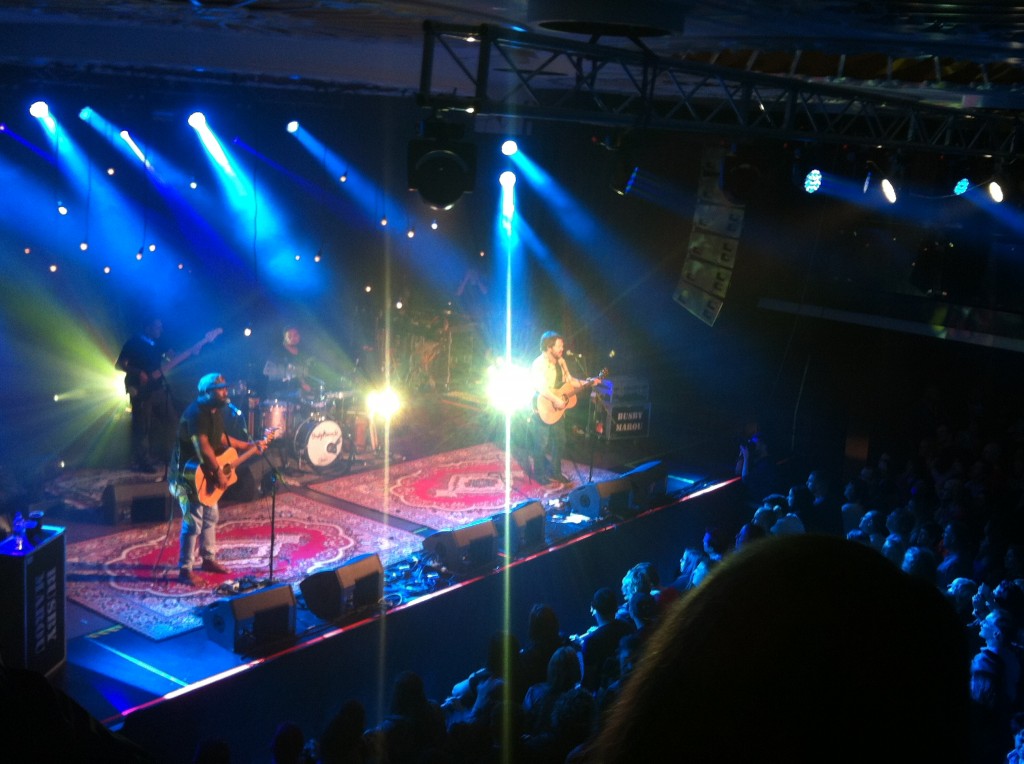 At a point in their set Marou traded his guitar for a ukulele, demonstrating that the guitar was not the only stringed instrument he had mastered. The ukuleleâ€™s appearance lifted the mood to an even higher level of light-heartedness, encouraging more swaying from the captivated crowd.

During another crowd favourite Biding My Time, Busby stepped back from the microphone and handed the lead over to the crowd, encouraging the loudest sing-a-long of the evening. The audience warmly received their songs My Island Home and My Second Mistake (the title track for their tour), My Second Mistake sending the crowd into a frenzy. Both of these songs being prime displays of Marouâ€™s ridiculously talented guitar playing, as he finger-picked each individual note during his solos without ever faulting.

After taking the time to express their gratitude for their support acts, family and everyone who had made the journey out to Eatons Hill that night, they began their closing song Underlying Message. Once again establishing the ridiculously high level of guitarist skill he possesses, Marou managed to play his guitar during this song with the ukulele dangling from his mouth, even stretching to transfer between the two instruments throughout the song. 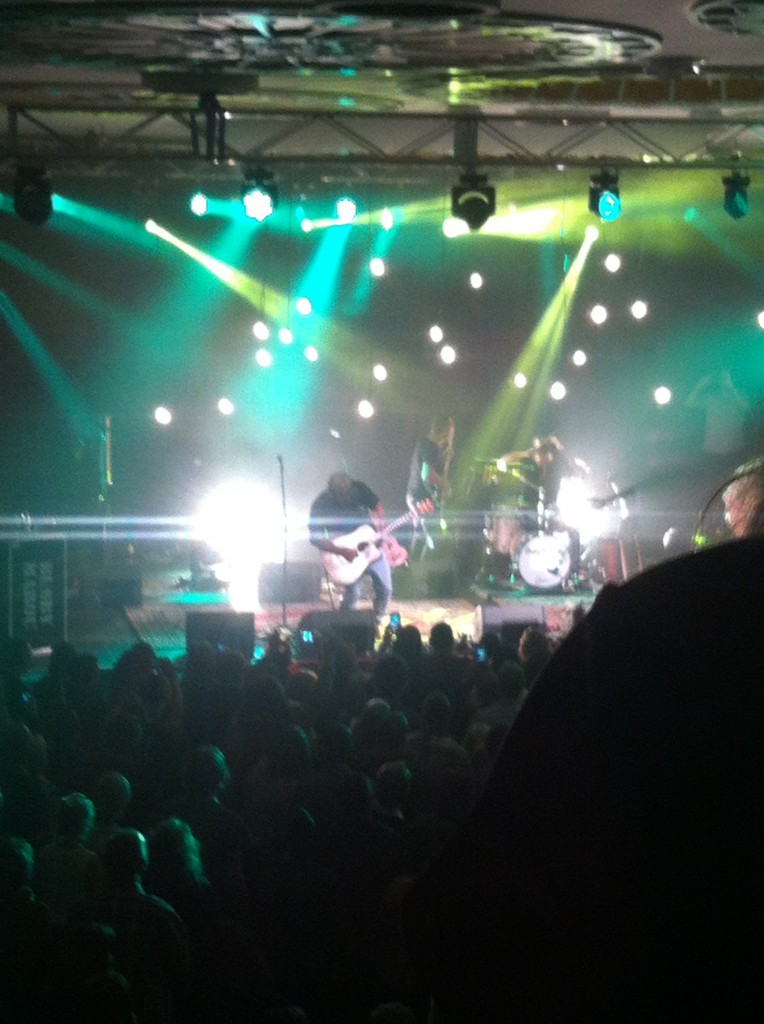 Immediately after Busby Marou exited the stage the crowd pleaded for an encore. After first having a sneaky drink back stage, the duo stepped back into the spotlights and delivered a three song encore, playing their well-loved songs All Of You and Wage A War, and finishing up with their rendition of Girls Just Wanna Have Fun, dedicating it to â€œnot only the girls but the boys too.â€ For their cover they invited their support acts back to the stage, alongside the rest of their tour family, to sing with them.Â The image of each member of the tour smiling on stage, singing the Cindy Lauper classic, will be impossible for anyone who attended to erase.

The stage became over-crowded as they invited audience members to jump on stage and dance with them too. With people spilling over the sides but continuing to dance regardless, the good vibes the song expelled became impossible to ignore. After stepping off stage the second time the crowd, who evidently craved a never-ending performance, prayed for one-more-song. The gracious performers returned one last time to give their crowd what they wished. Finishing by saying â€œClose your eyes, keep as quiet as you can, this song means a lot to usâ€, they began the official end of the night by playing their song Kinomie.

The soothing melodies they played on their guitars brought a peaceful end to an unforgettable performance. Once the duo had broke the trance they held over their crowd and exited the stage for the final time that night, audience members stopped to reflect on the night of hypnotic acoustic music they had just witnessed before piling out into the cold night air. It will be hard for another gig to ever top the acoustic skill that was unleashed onto the stage of the Eatons Hill Hotel that Saturday evening. 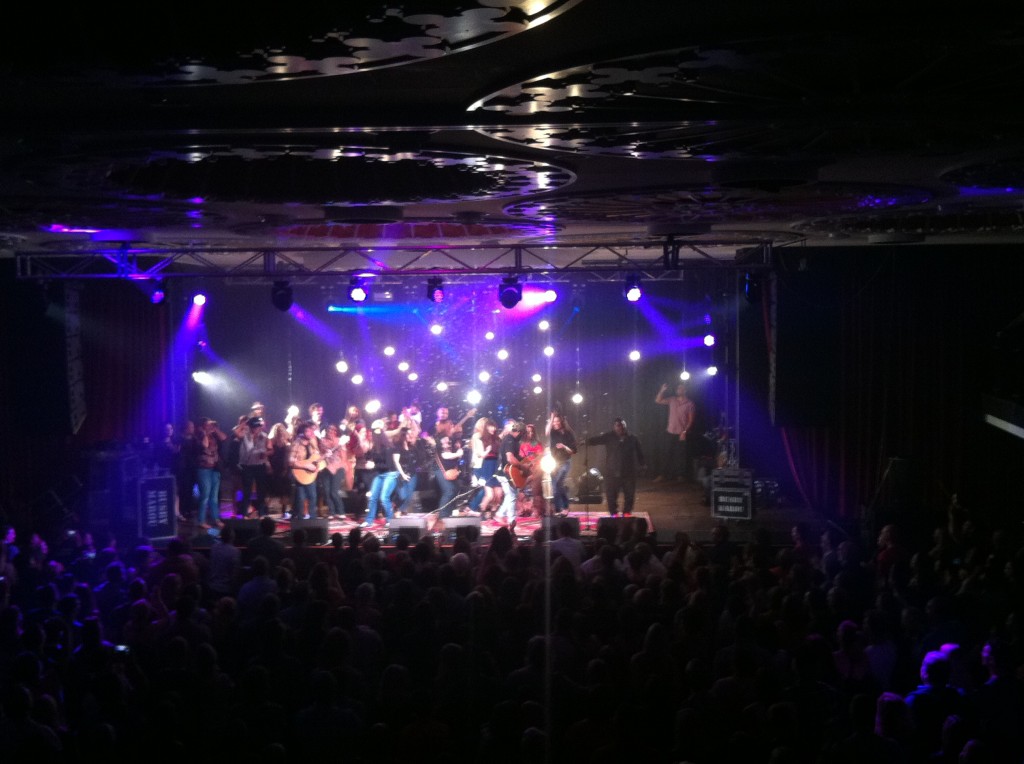