Dave Hughesâ€™ has cemented himself as one of Australiaâ€™s most popular comedians. In his latest show â€“ â€˜Pumpedâ€™ he proves exactly why we all fell in love with this everyday man in the first place.

Dave Hughes or Hughesy as he is commonly referred to, has had an impressive career in comedy. In recent years, he has starred predominately on the small-screen however he has left that behind him to focus solely on radio and stand-up. There is no denying that he is at home on the stage, he appears more relaxed and happy. Without the restrictions of television, Hughesy is able to let loose and reminds his audience that he can still come up with spectacular comic material.

Hughesy bounces on-stage with energy and a loveable cheeky grin. He jumps straight into his comedy act without missing a beat. Most of the show relies heavily on personal stories that create an intimate experience for the audience. Hughesy is a refreshing comedian who is brutally honest about his life and family. 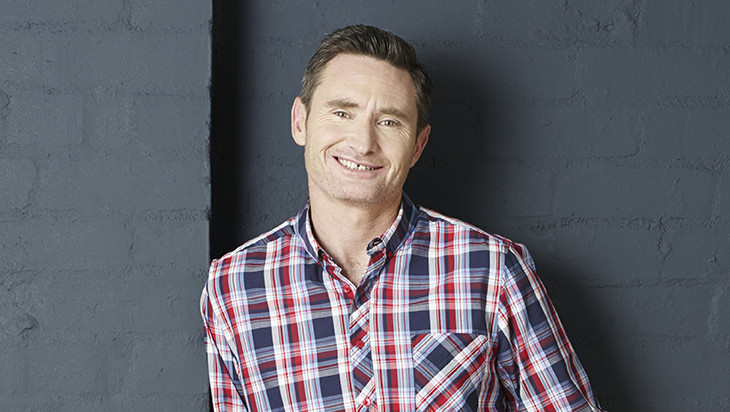 Hughesy understands that audiences donâ€™t want to hear about how much money he makes or the celebrities he rubs shoulders with. Instead, he tells the story of a 16 hour flight with his three young children or the time he nearly drowned in the shower after smoking a bong. Each story is more outrageous than the last and we learn more about the famous comedian by the second.

Showing no signs of slowing down, Hughesy’s love of performing is apparent throughout the entirety of the show. His jokes get snappier and his smile a tiny bit wider whenever the audience burst into fits of laughter (which is often!). His rants are relatable especially when he talks about his annoyance with airlines and a particular fast food worker. He doesn’t hold anything back and that is why he is still on top of his game.