Review: The Death of Bunny Munro by Nick Cave

â€œIt occurs to him that with each tick of the clock the memory of his mother fades, and she slips away. He feels, with a rush of iced wind across his heart, that even by just lying there he is losing her, little by little. He closes his eyes and attempts with reasonable success to ransack his memory and conjure up images of her. He hopes by doing this that he will prevent her from melting away completely. He wants, deep down, to remember her back into existence.â€

Such is the thought process of Bunny Jr., son of the titular main character in Nick Caveâ€™s second novel.

Heâ€™s better known for his work with Nick Cave & The Bad Seeds, but donâ€™t let that put you off his fiction. Cave insists he has always been a storyteller, and any fans of his music will be able to attest to that. Becoming his own character in performances, Cave has always been able to tell elaborate tales in four-minute bursts, and his longer writings deliver similarly. After publishing the award winning And The Ass Saw The Angel in 1989, Cave went on to produce The Death of Bunny Munro, released twenty years later in 2009. Like his first book, The Death of Bunny Munro is horrific and wonderful, laden with Caveâ€™s marvellous storytelling abilities and brilliant characters. 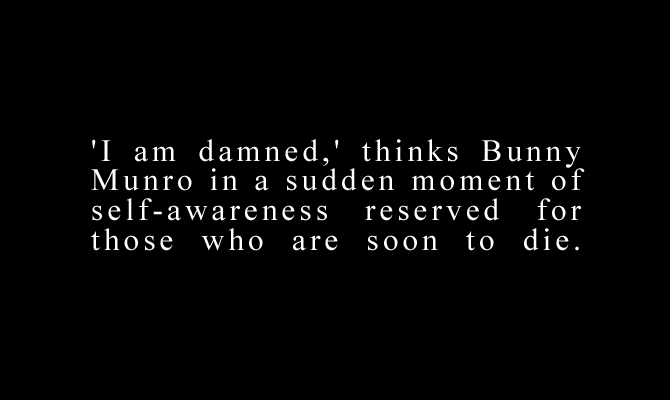 After the death of his wife, Bunny Munro takes his son, Bunny Jr., on a journey across Brighton, working as a door-to-door salesman of beauty products. Bunny is a perverse character, womanising from the very first chapter, and the journey with his son is highlighted by Bunnyâ€™s grotesque and sometimes downright horrifying view of women. The novel is littered with references to pop culture icons, including Avril Lavigne and Caveâ€™s friend Kylie Minogue, as Bunny speculates what it would be like to seduce these women. Though, perhaps seduce is too nice of a term for it.

Black comedy at its finest, this book had me somewhere between cringing and cackling throughout. At times though, Caveâ€™s poignancy comes through. Known for artful lyricism in songs like The Ship Song and Into My Arms, Cave manages to imbue moments of the novel with heartache of an immense proportion. Itâ€™s a delicate balancing act, and one that Cave manages spectacularly. Grotesque as it may be, The Death of Bunny Munro remains tragically sad, hilariously funny, and completely and utterly bizarre.