Sitting in the dimly lit VISY Theatre of the Brisbane Powerhouse, a glass of wine in one hand and a program in the other, the crowd buzzed with excited chatter.

This intimate setting offered further opportunity to appreciate the musicians up close. Being presented by innovative music team Clocked Out, there was no doubt that it would be a memorable evening. The theatre grew dark and a tall, bespectacled man emerged from the curtains. We applauded Erik Griswold, composer-pianist extraordinaire. 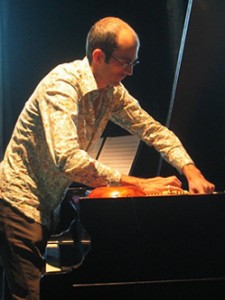 Griswold performed his compelling Ecstatic Descent, a piece in which he says he â€œprepares every note on the piano, in such a way that the instrument is radically â€œretunedâ€â€. I could not take my eyes off his hands, although his fingers were moving so exceptionally swiftly that it was not possible to lucidly focus on them. At first I was thinking wow, he must be showing off his astounding abilities just for the introduction, but alas. The entire piece continued with Griswold seemingly stuck in fast-forward; I could almost feel my own fingers cramping up, and was half expecting a confession of a third hand hiding somewhere. With eyes closed, you would swear there were four pianos being played at once; but no, it was just one incredibly talented musician.

Thoroughly making his way from the high notes to the low, and literally every note in between, Griswold offered an enchanting performance that left fellow concertgoers defining in delighted disbelief â€œextraordinaryâ€!

After a short intermission that allowed the crowd to collect their jaws from the floor, percussionist group Early Warning System appeared, planks of timber at the ready. 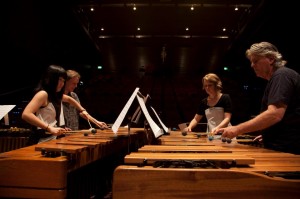 Watching each musician perform, I noticed that no two of them shared identical expressions, or portrayed similar emotions. Working so well as one unit, yet having his or her own personal technique, Early Warning System was living proof of how subjective music and art is to the individual. Their performance of the unique and inventive Timber was an exciting reminder of the talent that Brisbane musicians possess.

I look forward to experiencing the next big thing in percussion, which will no doubt be a result of their dedicated exploration of the possibilities of sound.

The Removalists Hits Brisbane With A Bang